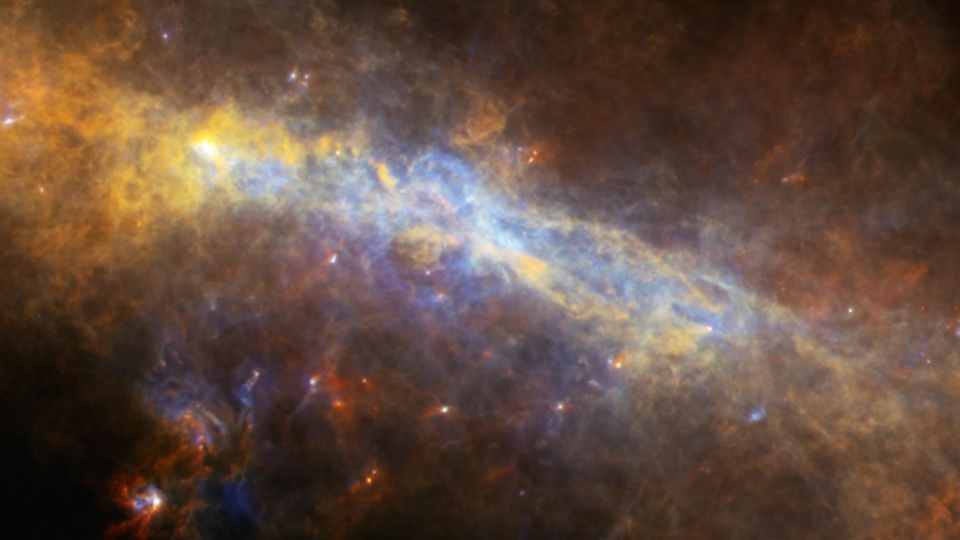 We know the world is spinning and spinning quickly—a whopping 366 meters per second (or 819 miles per hour for you imperialists)—but there are more motions at play! Earth is revolving around the Sun as well, and the Sun is wandering through our galaxy, the Milky Way. But now we know that even our galaxy is moving—and we even have an inkling as to the mysterious forces that cause this motion!

In a paper released in Nature Astronomy on January 30, a group of cosmologists demonstrated that our galaxy is moving at 631 kilometers per second (that’s 1,411 miles per hour, imperialists) with respect to the Cosmic Microwave Background. And we’re carried along with the uncreatively named Local Group of 50-odd galaxies of varying size. What tremendous force could impel an entire group of galaxies to such great speed?

The paper has a solution. Many have attributed our motion to the gravitational pull of massive clumps of galaxies (and their unseen haloes of additional mass we call dark matter) nicknamed “The Great Attractor” (or as some call it, “The Shapley Attractor,” not to be confused with a shapely attractor), but the alignment does not seem to match up. Even when one accounts for the diverting effects of other nearby clusters, the majority of our vector of motion remains unexplained. But by looking for what cannot be seen, the group of researchers has been able to come up with an addition to our understanding. A repulsor that is pushing us in addition to the structure that is pulling us.

What do you call this new thing? The title of the paper dubs it “The Dipole Repeller.” In astronomy we rely greatly upon the evidence provided to us by light—our understanding of the more exotic parts of our universe like black holes, dark matter, and dark energy has been hampered by the simple fact that they do not emit light like stars and galaxies do. Historically, when reviewing the structures and motions of the Universe around us, we have relied upon these ultra-dense (compared to the majority of our nearly empty universe) regions to explain what is happening. Since we now know that there are more forces at play, the paper analyzed the motion of all nearby objects to deduce the most likely region for this great repeller and it seems to be the thing propelling our group of galaxies away from it! The authors of the paper created a gorgeous if somewhat mind-bending video that describes the results using computer visualizations of the “flow” of galaxies in our local part of the Universe.

Is this dark energy? The authors never describe it as such, but this is a seemingly negative gravitational effect from an ultra-low density region of our nearby universe, so I wouldn’t be shocked if later publications drew that connection more firmly. While this is one of those scientific results that has fairly small impact on our day-to-day lives, it might be a huge step towards understanding the nature of the most powerful forces in the Universe, and like my high school guidance counselor always said: “It never hurts to know where you are headed!”