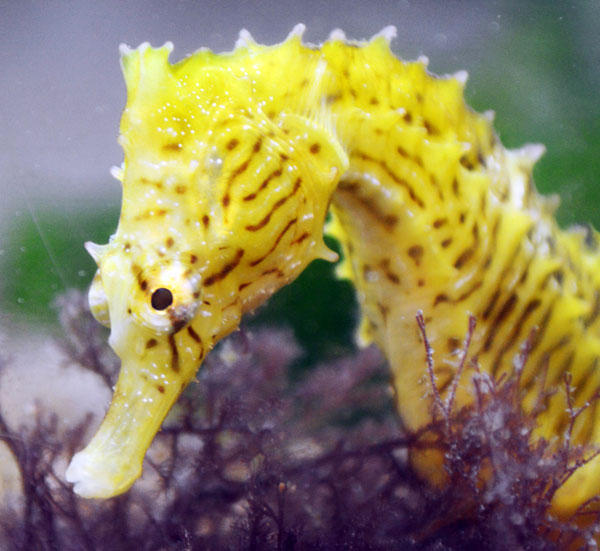 How does one of the slowest marine animals catch one of the fastest 90% of the time? Stealth, my friends. Plain and simple stealth.

Seahorse snouts may not appear built for stealth, but according to new research, that’s how they function.

“A seahorse is one the slowest swimming fish that we know of, but it’s able to capture prey that swim at incredible speeds for their size,” says Brad Gemmell, research associate at the University of Texas. “People often don't think of seahorses as amazing predators, but they really are.”

Copepods, one of seahorses’ favorites meals, are extremely small crustaceans that are a critical component of the marine food web. They’re also incredibly fast! When they detect waves produced by predators, they can jolt away at speeds of more than 500 body les per second. That equates to a six-foot person swimming underwater at 2,000 mph!

Still, seahorses succeed in catching copepods 90% of the time. “That’s extremely high,” says Gemmell, “and we wanted to know why.”

So he worked with colleagues at Texas Tech, using high-speed digital 3-D holography techniques. The method uses a microscope outfitted with a laser and a high-speed digital camera to catch the rapid movements of microscopic animals moving in and out of focus in a 3-D volume of liquid.

(A video of this is available here.)

Gemmell says that the unique head shape of seahorses and their kin likely evolved partly in response to pressures to catch their prey. Individuals that could get very close to prey without generating an escape response would be more successful in the long term.

In addition to their fluid snout motion, when seahorses are ready to pounce on copepods, their necks snap incredibly quickly, taking less than a millisecond. Copepods can respond to predator movements in two to three milliseconds—faster than almost anything known—but not fast enough to escape the strike of the stealthy seahorse.

The research was published last week in Nature Communications.