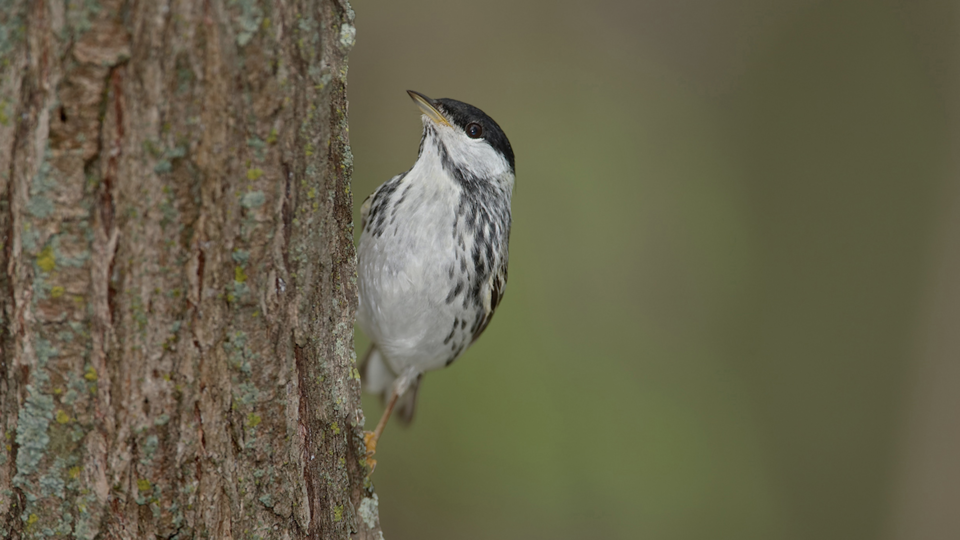 The blackpoll warbler is tiny—and a real featherweight! At twelve grams, it weighs about the same as twelve business cards. But last week, scientists confirmed that these small birds migrate incredibly large distances, and make the trip almost entirely over the open ocean.

“… There is no longer any doubt that the blackpoll undertakes one of the most audacious migrations of any bird on Earth,” exclaims Chris Rimmer, of the Vermont Center for Ecostudies. Rimmer and his colleagues tracked the birds on their fall migrations from Vermont and Nova Scotia all the way down to Columbia and Venezuela. And the technique they used is almost as astounding as the blackpolls’ migration.

Generally, tracking devices are too heavy for small animals like blackpolls, but recent advances have made the technology smaller and lighter. The scientists harnessed miniaturized geolocators—about the size of a dime and weighing only 0.5 grams—to the birds’ lower backs like a tiny backpack. By retrieving these when the warblers returned to Nova Scotia and Vermont the following spring, the team could trace the birds’ migration routes.

In Biology Letters, the researchers report that the birds completed a nonstop flight ranging from about 1,410 to 1,721 miles (2,270 to 2,770 kilometers) in just two to three days, making landfall somewhere in Puerto Rico, Cuba, and the islands known as the Greater Antilles, before heading to northern Venezuela and Columbia.

Most migratory songbirds that winter in South America take a less risky, continental route south through Mexico and Central America. Other birds, such as albatrosses, sandpipers, and gulls are known for trans-oceanic flights, but these fowl are able to make stops along the way. A water landing would be fatal to a warbler.

“It was pretty thrilling to get the return birds back, because their migratory feat in itself is on the brink of impossibility,” says lead author Bill DeLuca, of the University of Massachusetts, Amherst.

To prepare for the flight, the birds build up their fat stores, explains co-author Ryan Norris of the University of Guelph. “They eat as much as possible, in some cases doubling their body mass in fat so they can fly without needing food or water. For blackpolls, they don’t have the option of failing or coming up a bit short. It’s a fly-or-die journey that requires so much energy.”

And DeLuca hopes our new understanding of their migrations will help the blackpolls. “Many migratory songbirds, blackpolls included, are experiencing alarming population declines for a variety of reasons. If we can learn more about where these birds spend their time, particularly during the nonbreeding season, we can begin to examine and address what might be causing the declines.”