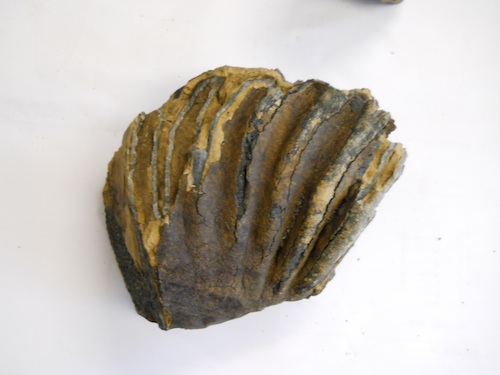 Almost a year has passed since crane operator Brandon Valasik discovered a Columbian mammoth (Mammuthus columbi) tooth at the Transbay Transit Center. When the find was donated to the Academy, Peter Roopnarine, curator of Invertebrate Zoology and Geology, told Science Today, “If we’re able to put the recent find on display, it will be a great opportunity to tell the story of the recent fossil history of San Francisco.”

The Academy has seized that opportunity. On a daily basis, Naturalist Center staff point out the tooth and talk about the ice age animals that roamed the area where San Francisco now stands. Visitors express astonishment that these real giants walked on this very spot.

And this awesome discovery might enable more paleontological finds. A number of workers from different Bay Area construction sites have come to the Academy just to see the tooth. They said they wanted to see what it looks like up close and personal so they know how to recognize another one if it turns up on the job. Visitors marvel that a construction worker spotted the tooth and “didn’t mistake it for just another rock.” Many are thrilled to learn that other workers have come to see it so they can be on the lookout at their construction sites.

The wonder and pride extend to the Transbay Transit Center. Recently, the Senior Geotechnical Engineer at the site came in to show the tooth to some friends. He boasted, “I was the third person to ever hold the tooth, and I set it aside in a box for safe keeping for the paleontologist!”

A member of the Academy’s PR department shared that a Transbay Joint Powers Authority employee called and inquired, “Can you confirm if the mammoth tooth is still on display? We have members of the community inquiring.” And just this week, Transbay staff was hard at work, installing a display of the Center’s human-made found objects in their lobby at 201 Mission Street. In doing so, a staff member called the Academy’s Geology Research department to request photos because they plan to display a banner that features the tooth at the Academy. (Click here to see their exhibit.)

So yes... cool! And incredible! And awesome! It's a foot-long piece of dentition once strong enough to grind up 320 kg (700 lbs) of vegetation a day for an animal weighing eight metric tons (18,000 lbs) that 11,000 years later retains a powerful hold on our imagination.

The Naturalist Center features two other items of note from the Academy’s Geology Research collections: a 1.07-meter (3.5-foot) sauropod (herbivorous dinosaur) leg bone which visitors love to touch and a 20-centimeter (eight-inch) round sauropod coprolite (fossilized poop). The typical reaction from the coprolite’s biggest fans—groups of five- to seven-year-old boys—is an instantaneous holding of noses, squinting of eyes, and a collective shout of “Ewwwwww!” because, after all, why wouldn’t it still be stinky after 150 million years?

As always, the educational opportunities in the Naturalist Center are endless.

Nan Sincero is a naturalist and Program Lead in the Academy's Naturalist Center.