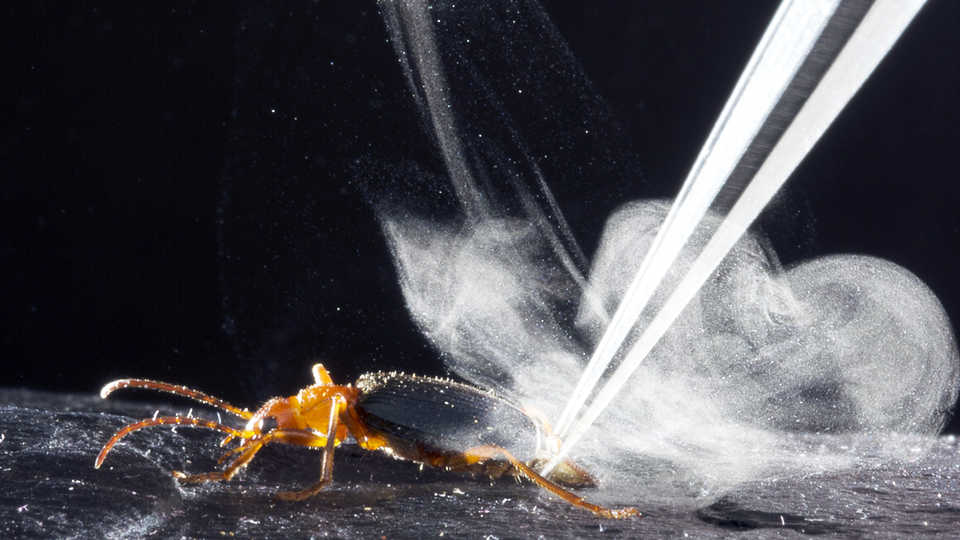 Powerful technologies often help scientists solve some of life’s deepest mysteries. A team of scientists recently used synchrotron X-ray imaging technology in tandem with high-speed cameras to resolve a big question about little creatures: how do bombardier beetles create the explosion that allows them to emit a jet of boiling chemicals? The study is published in the recent issue of Science.

You may think this is child’s play, but these beetles are deadly serious. They can defend themselves from predators (and careless humans) by rapidly releasing this liquid, which can kill other insects and small animals, and cause painful injury to you and me. The temperatures of this emission reach 100° Celsius, and the jet can spray several centimeters at a velocity of ten meters per second!

Apparently, scientists are serious about these beetles, too. Researchers have been studying these beetles—and their “explosion-induced defensive spray,” as described in the recent study—for many years, but they have never looked inside the insects. All previous studies have focused only on external factors, leaving two critical questions unanswered… How do the beetles create this exploding jet? And how do the beetles themselves not explode?

With the support from the Department of Energy and Department of Defense, the team made use of Argonne National Laboratory’s synchrotron to find the answers. (We produced a video about Lawrence Berkeley National Laboratory’s synchrotron and how it works several years ago.) These particle accelerators use X-rays released at high speeds to study the mechanics of some of the most minute objects and organisms. So why not bombardier beetles?

Using the synchrotron and a camera recording the action at a rate of 2,000 frames per second, the team discovered that vapor fills a very rigid reaction chamber inside the beetle, followed by an injection of a reactant droplet into the chamber, which causes an explosion. According to the study, “this energy liberates heat, boils water, and to a lesser extent provides the kinetic energy of the spray pulse,” implying that the release of the liquid is passive for the beetle, confirming previous theories.

The reaction chamber is connected to the exit channel by a passageway that opens to release the chemicals and closes immediately afterward, allowing a new reaction to quickly form inside the chamber. Obviously this entire process happens very rapidly. The scientists also believe that the rigid nature of the reaction chamber protects “the beetle’s internal tissues from the explosions.”

The team hopes their findings may help in designing blast-protection and propulsion systems. From beetles to bomb-protection and rockets with the help of some serious technology!

We asked study co-author Wendy Moore, an Academy research associate from the University of Arizona, about her involvement in the study. Following is the slightly edited emailed responses she sent.

What was your role in the new study?

Biologist, entomologist, bombardier beetle specialist (the other contributors on the project were all physical scientists). Collecting, identifying, dissecting, conducting the synchrotron experiments, and studying the anatomy of the defensive glands.

How did the study come about?

Christine Ortiz (of MIT) contacted me to see if I might be interested in helping her graduate student, Eric Arndt, study bombardier beetles with synchrotron radiation. I jumped at the opportunity, because I had been dreaming about doing just that ever since I heard about how synchrotron radiation could be applied to studying living beetles in a talk at the Carnegie Museum of Natural History delivered by Jake Socha in 2006. However, when Dr. Ortiz contacted me, we had no idea if this line of investigation would actually work for bombardier beetles. That it worked so well made this an incredibly exciting project.

How did you get interested in studying these beetles (and others)?

I actually got interested in studying bombardier beetles in a roundabout way. In 1998, I began my PhD work in the laboratory of David Maddison (then at the University of Arizona), who works on ground beetles (Carabidae). I had just finished my Master's degree, for which I worked on the systematics of marine isopod crustaceans, and I was casting about trying to settle on a group of ground beetles to focus on for my PhD research. During that time I traveled from the University of Arizona to San Francisco to visit David Kavanaugh and the collections at the Academy. After looking at the holdings for various groups of ground beetles that interested me, I came across an ant-nest beetle (paussine). I couldn't believe my eyes—it seemed like a beetle from another planet. And the next one I looked at was equally bizarre and in an entirely different way from the first. It went on and on like that for over an hour—and I was completely hooked. That night in my hotel room I read a paper on the group written by Philip Darlington in 1950. It was then that I learned that paussines are myrmecophiles (obligate associates of ants) and that they were bombardier beetles, like the brachinine bombardier beetles that Tom Eisner (Cornell University) made so famous.

Do other bombardier beetles (i.e. Paussinae) work in the same way as Brachinini as discussed in this study?

Yes, in that both groups have a two-chambered defensive gland anatomy and both groups deliver hot benzoquinones in defense. However the sprays of paussines are not pulsed, as it is in brachinines. In fact, although the focus of the synchrotron work to date has been on brachinines, we did record one paussine blast at the Argonne Lab. I hope to do more in the future.

What else are you working on?

I am working on many different projects with students and postdocs in my lab in the Department of Entomology at the University of Arizona, including glowing millipedes in California and arthropods of Sky Islands.

But most of my personal research effort is still focused on ant-nest bombardier beetles (paussines). Just last year, my postdoc James Robertson and I published the results of a molecular phylogenetic study of this group, in which we showed that the evolution of paussine beetles in Madagascar resulted in one of the fastest and most spectacular radiations of species ever documented. On Tuesday, Dr. Robertson and I leave for a month-long collecting trip in Vietnam and Thailand. From studying specimens in natural history museum collections, I think the same type of radiation is happening there in Southeast Asia.

I am also investigating the genes involved in generating the chemical precursors of bombardier beetle explosions (brachinines and paussines) along with UC Berkeley’s Kip Will and San Diego State’s Tanya Renner.