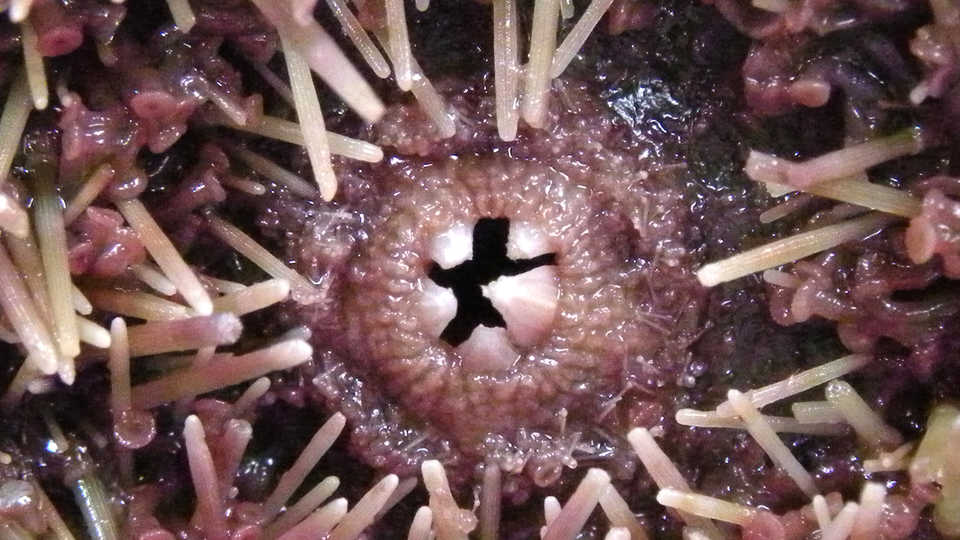 Imagine something like the claw in an arcade prize machine (or as it’s known in Toy Story movies, “The Claw”), but instead of taking your money, it’s attached to a rover that collects soil samples on Mars. And to make sure it does a super efficient job of this sediment collecting, it’s designed to mimic sea urchin teeth.

Urchins’ teeth are dome-shaped like “The Claw” and are incredibly strong and efficient. This mouthpiece, first described in detail by the Greek philosopher Aristotle—earning it the nickname Aristotle’s lantern—is composed of an intricate framework of muscles and five curved teeth with triangle-shaped tips that can scrape, cut, chew and bore holes into the toughest rocks. A colony of sea urchins can destroy an entire kelp forest by churning through rock and uprooting seaweed (more their kelp destroying in a Science Today article next week).

So Michael Frank, of UC San Diego, and colleagues wondered if the urchin’s extraordinary ability to rip through rock could translate to a better sediment sampler for space vehicles like the Mars rovers, which currently use shovels to collect ground samples. “Our goal was a bioinspired device that’s more precise and efficient at grabbing ground samples from different areas, and won't disturb the surrounding area like a shovel would,” he says.

Frank is part of a research group that uses engineering to explain biological structures and then designs bioinspired devices based on what they find. Understanding that evolution has had millions of years to perfect design and application, the UC San Diego scientists have used this approach to explore natural structures in seahorses, boxfish, porcupines, woodpeckers, porcupine fish and many other animals.

For this study, published recently in the Journal of Visualized Experiments, the bioinspiration came from pink sea urchins (Strongylocentrotus fragilis), which live at depths ranging from 100 to 1,000 meters in the Pacific Ocean. The team extracted the urchins’ mouthpieces, scanned them with microCT, essentially a 3D microscopy technique, and analyzed the structures.

With the data, the researchers started building prototypes of the claw-like device using a 3D printer. The first iteration was very close to the mouthpiece’s natural structure, but didn't do a very good job at grasping sand. In the second iteration, students flattened the pointed end of the teeth so the device would scoop up sand better. But the device wasn’t opening quite right. Finally, on the third iteration, they connected the teeth differently to the rest of the device, which allowed it to open much easier.

The device was then attached to a remote-controlled small rover. The researchers first tested the claw on beach sand, where it performed well. They then used the claw on sand that simulates Martian soil in density and humidity (or lack thereof). The device was able to scoop up that sand efficiently. (A video of their invention is available here.) Researchers envision a fleet of mini rovers equipped with the claw that could be deployed to collect samples and bring them back to a main rover.

The hope is that once the scientists grab the attention of NASA or SpaceX with their new technology, the urchins (or urchin-like devices) will be deployed to Mars.