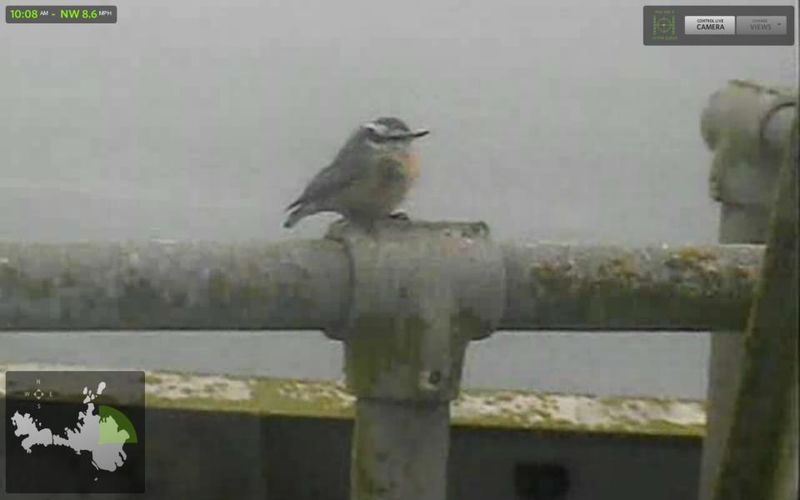 On the morning of September 14th, a birder named Matt Brady turned on his computer in Baton Rouge, Louisiana, opened an internet browser, and clicked on the Farallon Islands webcam to do a little virtual birding. The live camera, maintained by the California Academy of Sciences and mounted atop the Southeast Farallon Island lighthouse about 30 miles west of San Francisco, was pointed at that moment at an antenna array—the highest point on the isolated island, which is a migrant trap. A little bird flitted into view and perched. Brady squinted at his screen. He realized that it was a Yellow-throated Warbler, a very rare species in California—almost 2,000 miles away from where Brady sat comfortably at his desk in Louisiana.

He immediately called the crew of biologists stationed on the Farallones, who, several times zones ahead, were just rolling out of bed. A vagrant like a Yellow-throated Warbler is a big deal on the island; despite decades of daily coverage, there had been only five previous recorded sightings. The crew, all serious birders, sprinted out the front door of their hundred-year-old house and up a steep hill to reach the lighthouse. Sure enough, the warbler was up there.

That may have marked the first time a vagrant bird has ever been spotted, identified, reported, and chased via webcam—a significant moment in postmodern birding. Pretty soon, others caught on; such luminaries as Alvaro Jaramillo and Kenn Kaufman began posting regular sightings in a Facebook group called “SEFI Remote Birdwatching” created this fall by Matt Brady. In September, viewers identified a Blackburnian Warbler, American Redstart, Ovenbird, and Chestnut-sided Warbler on the Farallon webcam, all rare species in California. On September 25th, a Hermit Warbler, Nashville Warbler, and Magnolia Warbler appeared within a span of a few minutes.

It wasn’t long before Farallon webcam addicts started competing with each other to see who could identify the most species of birds onscreen—going so far as to create a Google spreadsheet to keep track of who had seen what. Although more than a dozen birders have submitted their totals so far, Matt Brady’s webcam list far exceeds anyone else’s. At last count, his personal total was 35 species out of 40 recorded thus far from the webcam, including 12 species of warblers—or, as Brady calls them, “weblers.”

“The most important variable is how much time you spend staring at the cam a day,” Brady advises. He admits to keeping a small window open with the webcam running in a corner of his computer screen while he studies. For the first time in eight years, he is not spending this fall season with the crew of Farallon biologists; the webcam lets him stay in touch with the place he knows so well.

Others have also become dedicated watchers. A birder named Christian Schwarz has been keeping a laptop propped next to his main work computer with the Farallon webcam running full screen, full time. “All my coworkers think it’s a really boring screensaver,” he remarked.

Hardcore webcam watchers have even invented an ironically derisive term for real, in-the-flesh sightings: “meat birds.” When a rare Prairie Warbler was seen on Southeast Farallon on October 5th but failed to pose for the webcam, virtual birders scoffed at an update posted in the webcam’s Facebook group. “This sighting is irrelevant,” one remarked.

The star at Southeast Farallon this summer, a Northern Gannet that was first spotted on April 25th and has hung around ever since—the first of its kind ever recorded in the Pacific Ocean—eluded virtual viewers for a while. But on September 13th, Californian birder Oscar Johnson logged on to the webcam and caught a glimpse of the distinctive bird flying past, and, on October 9th, Matt Brady was able to point and zoom the camera at the gannet perched on its favorite rocky cliff. At home in Oregon, I happened to log on just at the right moment to watch the famous bird preen, stretch its wings, and settle down on a rocky ledge, live on my computer monitor but hundreds of miles away.

Clearly, you can’t count webcam birds on your life list, and neither can you count meat birds on a digital list. But the question highlights an increasingly gray area. Today’s birders use such advanced technology to identify birds—image stabilization, parabolic listening devices, high-speed cameras—that the birds we “see” sometimes aren’t even detectable by normal human standards. In one sense, a webcam is just an extremely powerful spotting scope. So, where do you draw the line? Must the same photon strike both the bird and your eyeball?

The Farallon webcam runs year round; September (and early October) is the best month to look for migratory songbirds, but you never know what might show up—great white shark attacks on elephant seals have also been observed on the webcam. Recent virtual sightings have included a Brown Booby, Wandering Tattler, Golden-crowned and White-crowned Sparrows, Brewer’s and Red-winged Blackbirds, and even a passing Violet-green Swallow.

And this technology isn’t just for counting birds, Pete Warzybok one of the Farallon biologists from PRBO says. It can also aid the study of bird migration.

So if you want to test your digital skills and patience, visit the link here. Me, I’m off to find some real birds—in the meat, so to speak—closer to home.

Noah K. Strycker is a writer, photographer, adventurer, field researcher and general bird bum who works as associate editor of the American Birding Association's Birding magazine. He has been to the end of the world and back studying birds, including Adelie Penguins in Antarctica, Purple-crowned Fairy-Wrens in the Australian Outback and Wedge-billed Woodcreepers in Amazonian Ecuador. He is currently writing a book about birds.