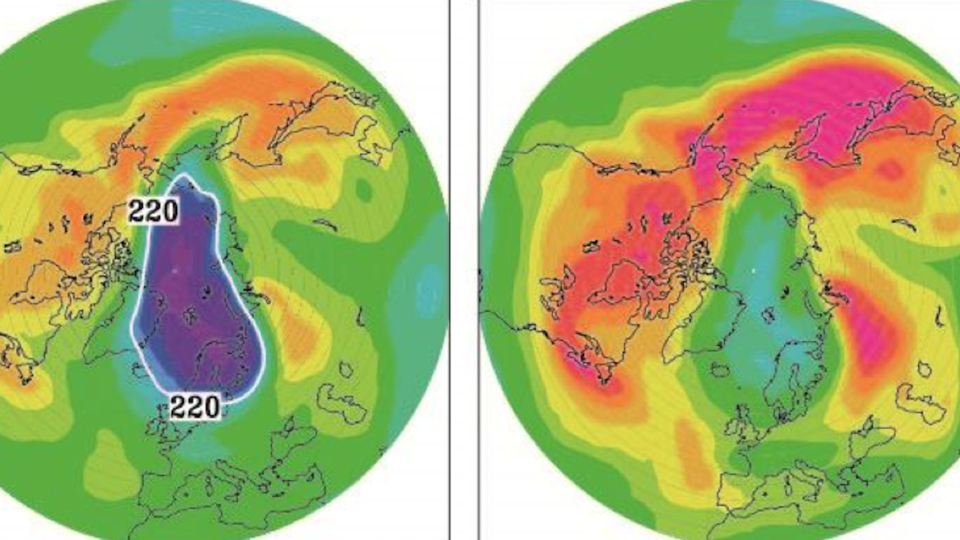 Located 20-30 kilometers (or 12-19 miles) above Earth in the stratosphere, the ozone layer works to protect life on Earth by absorbing most of the harmful ultraviolet (UV) radiation coming from the Sun. In the late 1970s and early 1980s, scientists discovered zones of ozone depletion over the Antarctic and Arctic (dubbed “holes”), due to hardy chlorine- and bromine-containing chemicals. Remarkably, an international treaty, the Montreal Protocol, was put into place quickly in 1987 to ban these substances. Amendments and adjustments have only made the treaty stronger, and now, all 197 countries are part of the ban.

In fact, atmospheric concentrations of these harmful substances peaked in 1993 and have subsequently declined. But what if the treaty weren’t in place? What if we had continued to produce and emit these chemicals? Several studies have looked into this, including one published today in Nature Communications.

For the current study, researchers used a state-of-the-art 3D computer model of atmospheric chemistry to investigate what would have happened to the ozone layer if the Montreal Protocol had not been implemented. They suggest that the Antarctic ozone hole would have grown in size by 40% by 2013. Their model also suggests that had ozone-depleting substances continued to increase, stratospheric ozone loss would have become significantly worse in other parts of the globe. A very large Arctic ozone hole would have occurred under the very frigid meteorological conditions of 2011 and smaller Arctic ozone holes would have become a regular occurrence, allowing more UV radiation to reach the surface.

“Our research confirms the importance of the Montreal Protocol and shows that we have already had real benefits,” says lead author Martyn Chipperfield, of the University of Leeds. “We knew that it would save us from large ozone loss in the future, but in fact we are already past the point when things would have become noticeably worse.”

The direct benefit to humans? Our health. In the most populated areas of Australia and New Zealand, which currently have the highest mortality rates from skin cancer, the model predicts that surface UV could have increased by 8–12% without the treaty; and in Northern Europe, increases would have exceeded 14% by 2013. In addition, the continued reduction in atmospheric emissions of chlorine and bromine should eventually translate into an increase in stratospheric ozone, reducing the incidence of skin cancer and preserving the temperature structure of the atmosphere, with important long-term consequences for circulation and climate.

A success! Now if we could only get a treaty like this in place for greenhouse gas emissions…