Acclaimed program for all 4th and 5th grade students in San Francisco will now expand to K-5, ensuring museum access to every local elementary student 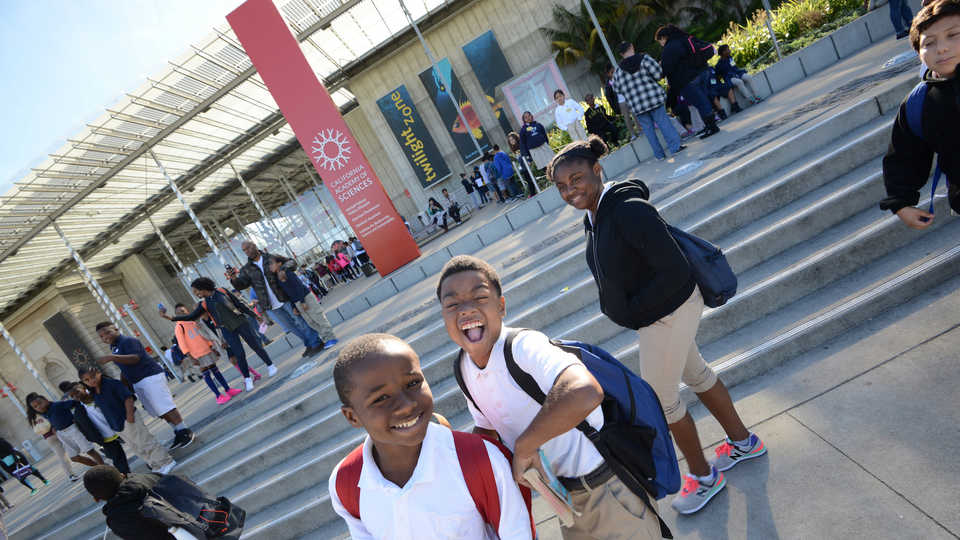 Tripling the total reach of the program, this expansion ensures that all kindergarten through fifth grade students in San Francisco can benefit from the joy, inspiration, and education of a facilitated visit to the Academy. (Photo credit: Noah Graham/Golden State Warriors)

San Francisco (March 5, 2018)—The California Academy of Sciences is pleased to announce the dramatic expansion of a program designed to ensure that every child in the city of San Francisco can enjoy both the economic and civic benefits of scientific literacy. Thanks to a transformative $9 million gift from philanthropists Arthur and Toni Rembe Rock, which augments an $11 million endowment the couple created in 2008, every San Francisco elementary school student—including public, private, parochial, and independent schools—will soon be able to visit the Academy during free field trips and family outings, returning every year from kindergarten through fifth grade. The “Rock Program,” which was originally launched a decade ago to serve fourth and fifth grade students, has already been delivered to more than 75,000 upper elementary school youth. Tripling the total reach of the program, this expansion ensures that all kindergarten through fifth grade students in San Francisco can benefit from the joy, inspiration, and education of a facilitated visit to the Academy. The program expansion, which will serve 28,000 per year once fully implemented across elementary schools by 2022, kicks off with a pilot of new field trip and family night experiences for 20-30 local second and third grade classrooms during the 2018-19 school year.

“Investing in early STEM education has a lasting impact not only on the lives of students, but also on our environment, economy, and society,” says Arthur Rock, philanthropist and long-time supporter of the Academy’s education programs. "By supporting early science education and leveling the playing field for every student in San Francisco, we’re ensuring that all students can benefit from the transformative experience of an Academy field trip. We're also creating a model partnership between a cultural organization and local schools that we hope will inspire similar collaborations in cities across the country."

Through the comprehensive, experience-based Rock Program, educators and their classrooms are provided with enriched field trip opportunities that include transportation to and from the museum, on-site science lessons led by Academy educators, educational take-home materials in multiple languages, and free teacher workshops. Another major pillar of the program is supporting family learning with an invitation for students to return with their families during a free Rock Family Night event during the year, in addition to a free museum pass that entitles each student to unlimited admission through the school year and a one-time free family visit. Going far beyond free entry to the museum, the Rock Program is designed to engage children with science and sustainability topics at a time when science and environmental literacy is more important than ever. Field trip experiences are also available in Cantonese, Mandarin, and Spanish to serve the learning needs of diverse student communities throughout the city.

“As we approach complete implementation of the new Next Generation Science Standards, teachers need opportunities to see the shifts in action. The Academy’s Rock Program helps tremendously with the new practices and content. The program engages students with inquiry and exploration, tying in issues relevant to the local world around them,” says Jill Radwanski, 4th grade teacher at Jefferson Elementary in San Francisco’s Sunset District. “As a teacher, I always look forward to the program as I know my students will not only learn important lessons, but have a great time in the process.”

From its inception ten years ago, the Rock Program has aimed to greatly increase the reach and impact of field trips while also ensuring that schools from underserved communities receive easy and equal access to the Academy. Both the provided transportation and the multilingual capabilities are intended to remove any barriers that might prohibit schools from taking advantage of this visionary program.

"Year after year, there's no higher reward as an educator than to watch young minds blossom during a field trip to the Academy. Children are natural scientists—asking questions, exploring their surroundings, and letting their curiosity lead. By introducing children to scientific thinking at an early age, they build critical science and environmental literacy skills during their most formative years,” says Dr. Elizabeth C. Babcock, the Academy's Roberts-Wilson Dean of Education and Chief Public Engagement Officer. "During Rock Family Nights, these students then return with their families and get to play the role of teacher, sharing their favorite museum experiences with an enthusiasm that is beyond inspiring. That sense of discovery is what we hope to spark in all youth who come through our doors."

A new grade level will be enrolled in the expanded Rock Program each year, beginning with second and third grade in fall 2019. The program will be fully operational by 2022, allowing each child to participate—and gain critical science literacy skills—over the course of six consecutive years. This generous endowment will allow the Rock Program to continue at the Academy in perpetuity, reaching new generations of students each year.

The Rock Program is just one of many efforts the Academy has initiated since opening its new facility in 2008 to ensure that the museum is accessible and welcoming to the whole Bay Area community—a portfolio of programs operated under the Academy for All initiative. As a leader in science education, the Academy is committed to breaking down barriers to entry for the museum—whether cost, access, language, or culture—opening doors wide to the entire Bay Area through free and reduced admission programs that range from Neighborhood Free Weekends twice a year to $3 general admission for EBT/WIC card holders and their families. The expanded Rock Program makes this suite of programs even more impactful and is an enduring and transformative gift to the citizens of San Francisco.

The California Academy of Sciences is a renowned scientific and educational institution dedicated to exploring, explaining, and sustaining life. Based in San Francisco’s Golden Gate Park, it is home to a world-class aquarium, planetarium, and natural history museum, as well as innovative programs in scientific research and education—all under one living roof.