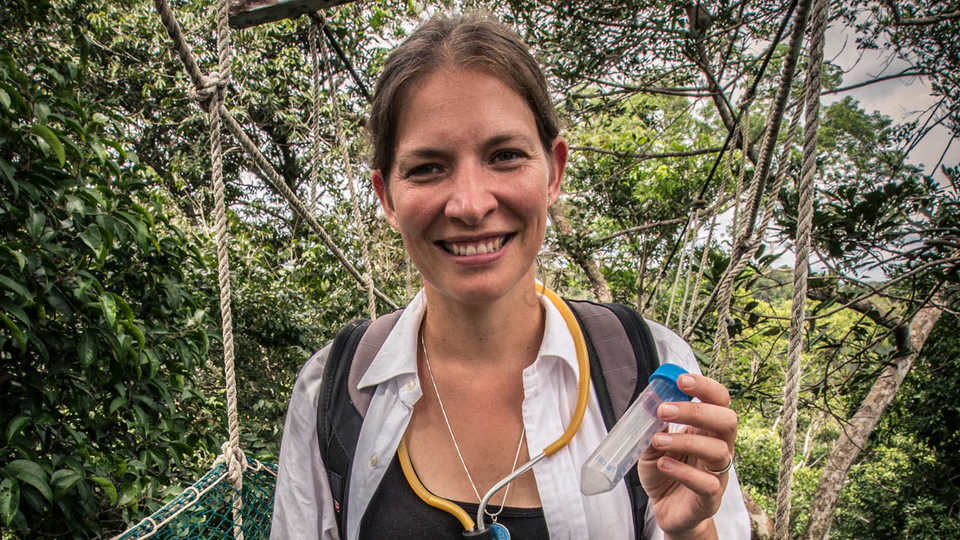 SAN FRANCISCO (August 15, 2014)—The California Academy of Sciences is pleased to announce the appointment of Michelle Trautwein, PhD, as its newest Assistant Curator and Schlinger Chair of Dipterology. In her new role, Trautwein will study the evolution and diversification of insects, particularly flies, through the use of modern phylogenetic and systematic methods and oversee the Academy's extensive fly collection. She will also continue exploring the rich diversity and evolutionary history of arthropod species that live on and with humans—from face mites to insects in homes. In addition to her research, Trautwein is passionate about public engagement and empowering non-scientists to become active and invested in the scientific process of research and discovery.

"As a museum scientist, I see my role at the Academy as an incredible opportunity and responsibility to get people of all ages informed and excited about the process of doing science," says Trautwein, the Academy's newest curator. "I'm looking forward to being able to further my studies in a world-class research institution while expanding its reach as a public museum and biodiversity library."

Trautwein's scientific research includes mapping the evolutionary history of flies, by tracing more than 260 million years of genetic evolution to better understand how and when major groups of flies appeared on Earth and how milestones in their evolution, like blood feeding, occurred. Flies account for about 10% of the known life forms on Earth and have a profound impact on human societies—killing more than one million people each year through vector-borne diseases like malaria. Often thought of simply as pests, Trautwein's research highlights the significant effect these insects have on human society, informing the public about their largely underappreciated benefits as pollinators (of chocolate, for example), decomposers, and model organisms for genetic research.

Trautwein has also developed citizen science projects focused on the arthropods in our daily lives—including "Arthropods in Our Homes," which aims to explore the diversity of insects commonly found in homes around the world, and "Meet Your Mites," which aims to unravel the evolutionary history of human face mites. By surveying the species that live with and on us, which she affectionately refers to them as "our roommates," Trautwein's goal is to better understand how the effects of human behavior impact arthropod evolution.

"Often people have the idea that biodiversity is something that you find only in remote locations in the rainforest or on coral reefs, but the truth is, it's all around us, even in our own homes," says Trautwein. "I'm interested in studying the evolutionary history of not only organisms that live in remote wildernesses, but also those that live with us and that we interact with every day. I want to know more about how these human-arthropod relationships have developed over time."

"We're thrilled to welcome Michelle to the Academy during this time of tremendous growth within our research division," says Dr. Meg Lowman, Chief of Science and Sustainability at the Academy. "Her passion for empowering the public to explore science is well aligned with our mission to explore and explain life, and her research on insect evolution will contribute to our global efforts to understand and sustain the biodiversity of our planet."

As an undergraduate, Trautwein originally planned to pursue a career in art, specifically scientific illustration, but was inspired to shift her focus to research during a trip to the coastal rainforests of Costa Rica, where she was mesmerized by the insect diversity that surrounded her. Trautwein finds synergy in both the scientific and artistic process, believing that both fields require and benefit from creative approaches to asking and answering questions about the world.

Prior to joining the Academy, Trautwein served as Assistant Director of the Biodiversity Laboratory at the Nature Research Center at the North Carolina Museum of Natural Sciences. She received a degree in biology at the University of Texas and a PhD in Entomology from North Carolina State University, where she has served as an adjunct professor since 2012. Trautwein lives in Tiburon, California with her two children.

The Institute for Biodiversity Science and Sustainability at the California Academy of Sciences is at the forefront of efforts to understand two of the most important topics of our time: the nature and future of life on Earth. Based in San Francisco, the institute is home to more than 60 research scientists and aquarium biologists, as well as 45.6 million scientific specimens from around the world?nearly 40,000 of which are alive and on display in the Academy?s Steinhart Aquarium. The institute also leverages the expertise and efforts of more than 100 international Research and Field Associates and 300 distinguished Fellows. Through expeditions around the globe, captive breeding programs, and investigations in the lab, the institute?s scientists strive to understand the evolution and interconnectedness of life. Through these same efforts, as well as through partnerships, community outreach, and public engagement initiatives, the institute aims to guide critical conservation decisions and address the challenge of sustainability.