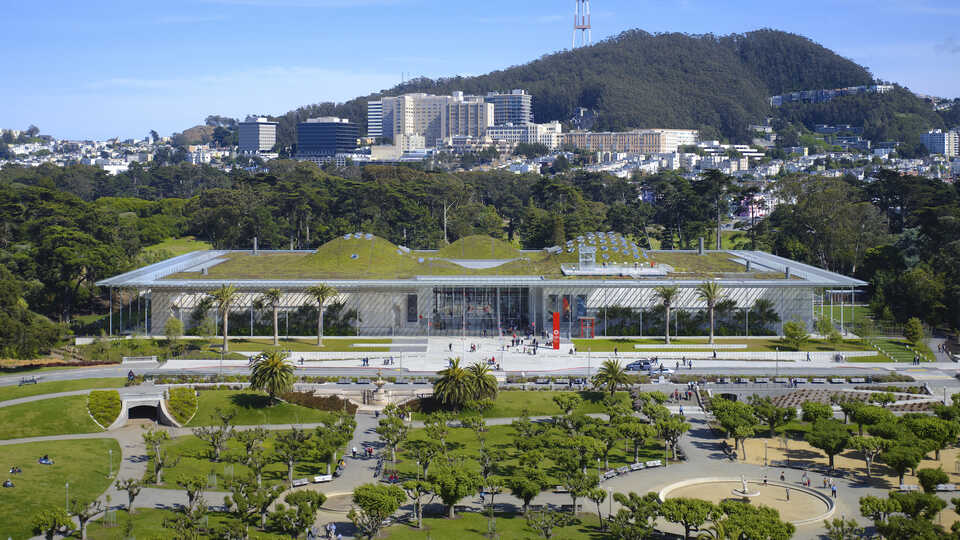 SAN FRANCISCO (January 18, 2022)—The California Academy of Sciences is pleased to announce the election of Dan Janney as the new Chair of its Board of Trustees. For the past four years Janney has served on the Academy’s Board, most recently as a member of its Executive Committee. In this new role, which he assumed on September 1, 2021, Janney leads the Academy’s Board of Trustees as the institution pursues its bold new mission to regenerate the natural world through science, learning, and collaboration.

“We are thrilled to welcome Dan Janney as our new Board Chair. Dan has been a highly engaged and dynamic member of our Board since 2017, and we are excited about how he will help steer the Academy into this exciting next chapter as we explore what it means to be a regenerative force for good, a diverse and equitable institution, and a leader in science and environmental learning,” says Dr. Scott Sampson, the Academy’s Executive Director.

Since joining the Board in 2017, Janney has played a central role in guiding and strengthening the institution. He led the executive search that brought Dr. Scott Sampson to the Academy, and was a crucial voice on the Finance Committee as it effectively steered the Academy through the temporary closure brought on by the global pandemic. As Board Chair, Janney will be leading at a critical time for the Academy, when the organization is both launching a new institutional strategy and significantly deepening its commitment to equity and inclusion.

In addition, six new members have been elected to the Academy's Board of Trustees. “Over the past 18 months, advancing diversity, equity, inclusion, and access (DEIA) at all levels of our organization has been a top priority for the Academy. Our Board and staff have engaged in this critical work, led by our consultants The Mosaic Collaborative, and we are especially thrilled to welcome a more diverse cohort of new Board members who have been active in the DEIA space,” says Sampson. “We believe DEIA must be encoded into the DNA of all that we do: From Dr. Lisa D. White’s efforts to increase DEIA in geoscience to Dr. Corey Garza’s work advancing the participation of underrepresented groups in science, we look forward to our Board’s guidance as the Academy moves forward in this essential work.”

The only place in the world to house an aquarium, planetarium, rainforest, and natural history museum under one living roof, the Academy is also home to world-class biodiversity science, environmental education, and community engagement programs that aim to reimagine the relationship between people and the planet. The new Board of Trustees Chair and Members are:

Dan Janney is the managing partner of Alta Partners, which he joined at its founding in 1996. He has nearly 25 years of successful early-stage investing experience in life sciences, and his focus on working with talented entrepreneurs to create companies around novel insights in biology and new approaches to drug discovery has led to the funding and development of 35 companies. Prior to Alta, Janney was a senior investment banker at Montgomery Securities.

He currently serves on the board of directors for several public and private companies, including Allakos, Be Biopharma, Curasen Therapeutics, ImmuneID, Krystal Biotech, Lassen Therapeutics, Novome Biotechnologies, and Prolacta Bioscience. Janney is a member of The President’s Council of the J. David Gladstone Institutes, and also serves on the Board of Regents of Georgetown University. Janney received his B.A. from Georgetown University and holds a Master of Business Administration from the Anderson School at the University of California, Los Angeles.

Dr. Lisa D. White joined the University of California Museum of Paleontology (UCMP) in 2012 as director of education and outreach, following a 22-year stint at San Francisco State University (SFSU), where she held positions of professor of geosciences and associate dean of the College of Science and Engineering. As the education director at the UCMP, she manages the growing body of materials available on UCMP websites to support teaching and learning about evolution, the fossil record, and the nature and process of science. While at SFSU, she taught undergraduate classes in paleontology, historical geology, and oceanography, and guided research projects with graduate students in Miocene diatoms of the Monterey Formation of California and fossil cold seep assemblages in the Franciscan Complex. As White explained in a 2014 California Magazine article, "My childhood home in San Francisco is a block away from the California Academy of Sciences in Golden Gate Park, and I think frequent visits to the California Academy of Sciences must have sparked an early interest in paleontology and geology." White received a BA in geology from San Francisco State University and holds a PhD in earth sciences from UC Santa Cruz.

White has extensive experience with science education programs for underrepresented students and leads multiple efforts at UCMP to increase diversity, equity, and inclusion in geology and paleobiology through programs such as ACCESS Paleo (Advancing Community College Education and Student Success).

Mike Sweeney is executive director of The Nature Conservancy’s California Chapter, a position he assumed in 2008, and also oversees the organization’s programs in Hawai’i, Polynesia, and Micronesia. He joined The Nature Conservancy’s California chapter in 1998 as a project director, became director of real estate in 2000, and became chief operating officer and associate state director in 2001. Prior to joining The Nature Conservancy, he was special assistant to Interior Secretary Bruce Babbitt during the first Clinton Administration. Previously, he worked in national politics for the Clinton-Gore ’92 campaign in Little Rock, and lived in Japan where he worked for Kodansha Ltd., Japan's largest publisher, and served on the staff of Representative Takashi Kosugi, a member of the Japanese Diet. He has previously served on the Advisory Council for the Public Policy Institute of California’s Water Policy Center and for three terms as program committee chair on the board of Island Conservation. He currently serves on the board of the Science for People and Nature Partnership. He holds an MBA from Harvard Business School and a BA in East Asian studies from Harvard College.

John Goldman is the president and co-founder of The John & Marcia Goldman Foundation and a dedicated civic volunteer, active in various philanthropic and community organizations following his business and government career. Established in 1997, the Foundation awards grants in the areas of youth development, science and health, arts and culture, and special initiatives. The current focus of the science and health program is in the fields of autism spectrum and autoimmune disorders. A native San Franciscan, Goldman graduated from Lick-Wilmerding High School, and holds an undergraduate degree from Swarthmore College and an MBA from the Stanford University Graduate School of Business. Goldman served as the president of the San Francisco Symphony from 2001 until 2012 after joining the Symphony’s Board of Governors in 1996, and continues to serve on the Symphony’s board today. He is a past president of the San Francisco-based Jewish Community Federation, and he recently completed his terms on the board of Stanford Health Care and the U.S. Olympic and Paralympic Foundation. Goldman was formerly chair of the Stanford Athletic Board, a member of Stanford Live!, and on the Board of Managers of Swarthmore College. He served as a trustee of the John F. Kennedy Center for the Performing Arts since his appointment by President Obama in 2014 until 2021. Professionally, Goldman is the former chairman of Willis Insurance Services of California, Inc. and was chief executive officer of Richard N. Goldman & Co.

Dr. Corey Garza is a professor in the Department of Marine Science at California State University, Monterey Bay. He was previously a research ecologist with the National Oceanic and Atmospheric Administration (NOAA), where he served as scientific liaison to the United States Environmental Protection Agency's Long Island Sound Study. His research in marine landscape ecology studies the relationship between habitat complexity and patterns of species distribution and abundance in marine communities. Garza serves as the director for the Coastal and Marine Ecosystems Program, a National Science Foundation (NSF) and NOAA funded program that administers the Monterey Bay Regional Ocean Sciences Research Experiences for Undergraduates, the NOAA Center For Coastal and Marine Ecosystems, and NSF ASPIRE (Active Societal Participation in Research and Education) program. He is also a research fellow of the California Academy of Sciences and serves on the board of directors for the American Geophysical Union. Garza received a BS in biology from CSU Los Angeles, and a PhD in ecology, evolution, and marine biology from UC Santa Barbara.

Garza is active in educational outreach, particularly in advancing the participation of underrepresented groups in science. He has previously served on the National Board of Directors of SACNAS (Advancing Chicanos/Hispanics and Native Americans in Science), and for the past 18 years, has organized special programming in marine science at their annual meeting. He also serves on the Diversity and Inclusion Advisory Committee for the American Geophysical Union and the Council of Experts for the National Science Foundation’s Center for Advancing Research Impact in Society.

Nathan Brostrom serves as executive vice president and chief financial officer for the University of California, responsible for coordinating the systemwide operating budget, asset, debt and risk management, capital planning and finance, procurement, real estate, and the allocation of resources to the ten UC campuses, five medical centers, and the Lawrence Berkeley National Laboratory. In 2019-2020, Brostrom served as the interim chancellor at UC Merced, the system’s youngest and fastest-growing campus. Before becoming systemwide CFO in 2014, Brostrom served as executive vice president for business operations, after spending three years as vice chancellor for administration at UC Berkeley, beginning in 2006. Prior to that, Brostrom spent 10 years as managing director and manager of the Western Region Public Finance group for J.P. Morgan, where he worked on financial projects totaling more than $100 billion for municipal clients throughout the western United States. He serves on the boards for the Keck Telescope, UC’s captive insurance company Fiat Lux, and Futures Without Violence, an international organization that works to reduce domestic abuse and violence against women and children. Brostrom graduated Phi Beta Kappa from Stanford University and holds a master’s degree in public and international affairs from Princeton University. He and his wife Caitlin live in Berkeley.

The California Academy of Sciences is a renowned scientific and educational institution with a mission to regenerate the natural world through science, learning, and collaboration. Based in San Francisco’s Golden Gate Park, it is home to a world-class aquarium, planetarium, and natural history museum, as well as innovative programs in biodiversity science, environmental learning, and collaborative engagement—all under one living roof. Museum hours are 9:30 am – 5:00 pm Monday – Saturday, and 11:00 am – 5:00 pm on Sunday. Admission includes all exhibits, programs, and shows. For daily ticket prices, please visit www.calacademy.org or call (415) 379-8000 for more information.