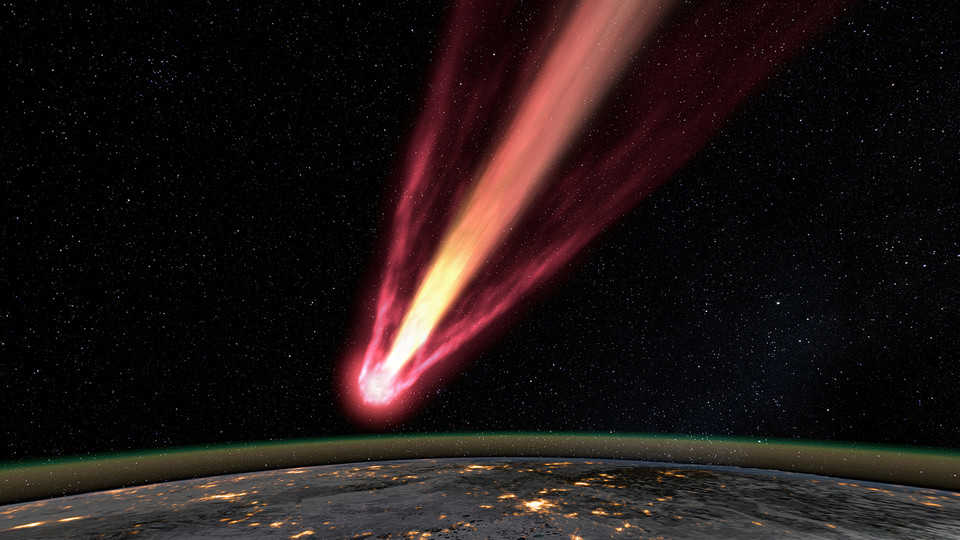 San Francisco (February 1, 2016) — In the California Academy of Sciences’ latest original planetarium show, Incoming!, audiences will discover how asteroids and comets have collided with our planet throughout history, changing the course of life on Earth and shaping the world we know today. From the comfort of a planetarium seat, viewers will embark on a dynamic journey on the trail of asteroids and comets, get an up close look at the advanced technologies that allow scientists to detect asteroids before they reach Earth, and visualize historic space events billions of years in the making—all within an immersive, all-digital dome that brings the captivating story of our cosmic origins to life like never before.

Narrated by George Takei, Incoming! explores the past, present, and future of our Solar System and the landmark discoveries scientists have made by sending spacecraft to visit tiny worlds. Following its first four award-winning productions, Fragile Planet, Life: A Cosmic Story, Earthquake: Evidence of a Restless Planet, and Habitat Earth, Morrison Planetarium will premiere Incoming! on March 11, 2016.

“Understanding the threat of asteroids and comets colliding with Earth is critical to the sustainability of our planet. But these objects also tell us about our past—they have wandered the Solar System since its formation, and they have changed the course of life on Earth,” says Ryan Wyatt, Senior Director of Morrison Planetarium and Science Visualization at the Academy. “Through cutting-edge science visualization and immersive fulldome experiences, we’re thrilled to share these important stories with Academy visitors in an engaging new way.”

The show opens with a lizard’s-eye view of the Arizona desert. While this may seem like an unlikely starting point for a planetarium show, sweeping views quickly reveal the kilometer-wide Barringer Crater. This scar on Earth’s surface formed almost 50,000 years ago as the result of an asteroid vaporizing upon impact with our planet, devastating the local environment and changing our planetary landscape. While geologic activity erases almost all evidence of these kinds of impacts, Barringer joins nearly 200 impact craters around the world that have been identified by scientists. Audiences will learn how one impact site in particular provides valuable clues about the demise of the dinosaurs—and how a far-traveling visitor from space transformed life on Earth.

While these planet-altering impacts began billions of years ago, small objects from space continue to enter our atmosphere all the time. High-powered visuals will transport viewers back in time to experience landmark cosmic events, including the largest of these modern impacts, which occurred above Chelyabinsk, Russia, in February 2013. At almost 20 meters in diameter, the Chelyabinsk meteor entered our atmosphere—sudden and undetected—with a burst of light brighter than the Sun and created a shockwave that shattered windows and damaged buildings. Incoming! uses observed data to recreate the precise path of the meteor’s atmospheric entry, allowing audiences to ride along with the planetarium-sized asteroid.

Based on current scientific and astronomical data, the show’s vivid visualizations are the result of tens of thousands of hours’ worth of work by the Academy’s in-house Visualization Studio, one of the only museum-based production studios in the country. This highly skilled team of animators, engineers, and production experts worked closely with dozens of science advisors and partners, translating complex data into an engaging and educational digital experience for viewers of all ages.

Throughout the show, cutting-edge visualizations also allow viewers to tag along with robot explorers, zooming by rocky asteroids and icy comets—and even the dwarf planet Pluto. While astronauts have only traveled as far as our nearest neighbor in space, the Moon, spacecraft continue to venture to mysterious worlds beyond to make landmark observations and collect valuable data about this final frontier.

Incoming! also gives audiences a closer look at the scientific advances that may allow us to find and track cosmic threats before they reach planet Earth. The show concludes with glowing nighttime views of Chile’s Large Synoptic Survey Telescope, which, once completed, will survey the entire sky every few days, observing and detecting faint moving objects, including asteroids and other Near-Earth Objects, with incredible sensitivity.

During every show at Morrison Planetarium, a presenter will deliver a live update, featuring the latest real-time data from current NASA missions, including Dawn and New Horizons. Presenters will also share how humans fit into this unfolding story of our cosmic origins. Fans of the show's score can purchase the soundtrack to Incoming! by longtime Academy composer Mike Jennings, available on iTunes and Amazon starting March 11.

Incoming! will play several times daily in Morrison Planetarium through September 5, 2016. Adults 21+ will have the chance to preview the show during a special NightLife event on Thursday, March 10 from 6-10 pm. Academy visitors can also enjoy a daily suite of interactive, space-themed programs, including a presenter-led show in Hohfeld Hall titled Galaxy of Worlds, which explores how planetary systems take shape.