Scientists find additional evidence that the Philippines is one of the most species-rich places on the planet; provide recommendations for conservation 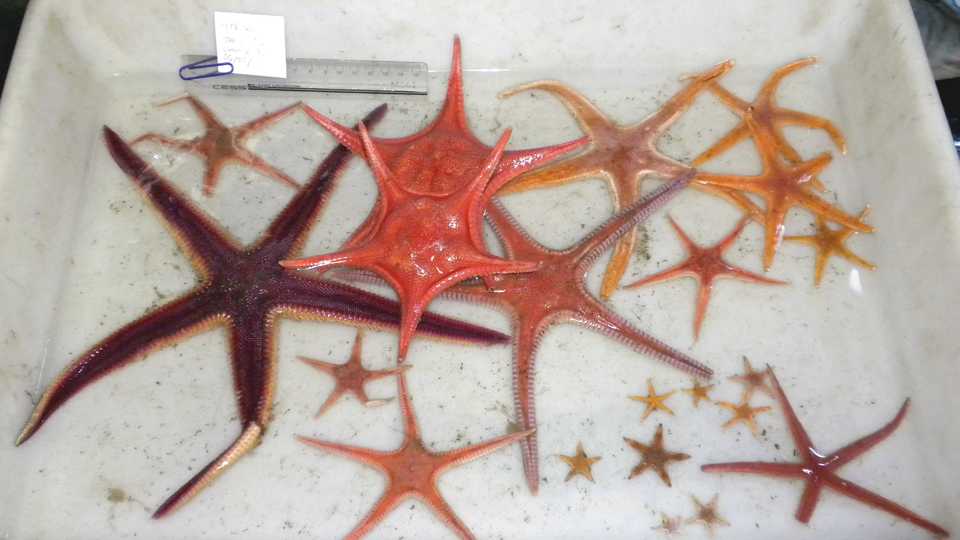 SAN FRANCISCO (June 24, 2011) — This spring, scientists from the California Academy of Sciences braved leeches, lionfish, whip-scorpions and a wide variety of other biting and stinging creatures to lead the most comprehensive scientific survey effort ever conducted in the Philippines, documenting both terrestrial and marine life forms from the tops of the highest mountains to the depths of the sea. They were joined on this unprecedented, multi-disciplinary undertaking by more than two dozen colleagues from the Philippines, as well as by a team of Academy educators who worked to share the expedition's findings with local community and conservation groups. Over the course of the expedition, which was funded by a generous gift from Margaret and Will Hearst, the scientists discovered more than 300 species that are likely new to science, including dozens of new insects and spiders, deep-sea armored corals, ornate sea pens, bizarre new sea urchins and sea stars, a shrimp-eating swell shark, and over 50 colorful new sea slugs. These discoveries will be confirmed and described over the coming months, as the scientists use both microscopes and DNA sequencing to analyze their specimens.

"The Philippines is one of the hottest of the hotspots for diverse and threatened life on Earth," says Dr. Terrence Gosliner, Dean of Science and Research Collections at the California Academy of Sciences and leader of the 2011 Philippine Biodiversity Expedition. "Despite this designation, however, the biodiversity here is still relatively unknown, and we found new species during nearly every dive and hike as we surveyed the country's reefs, rainforests, and the ocean floor. The species lists and distribution maps that we created during this expedition will help to inform future conservation decisions and ensure that this remarkable biodiversity is afforded the best possible chance of survival."

Despite intensive efforts to document life on Earth, scientists estimate that more than 90 percent of the species on this planet have yet to be discovered. In the face of large-scale habitat loss and degradation, many of these species are disappearing before we even know they exist. As they join the ranks of the extinct, we are not only losing members of our family tree—we are also losing potential medical treatments, agricultural pollinators, oxygen producers, soil servicers, and many other critical components of healthy, functioning ecosystems. In order to make smart decisions about how to conserve what is left of our planet's biodiversity, we must make a concerted effort to rapidly increase our knowledge about these life forms and their distribution. This was the motivation behind the Academy's 2011 Philippine Biodiversity Expedition, which aimed to dramatically improve our understanding of one of the most species-rich places on Earth.

During their 42-day expedition to survey Luzon Island—the largest island in the Philippine archipelago—and its surrounding waters, the international team of scientists created species lists and distribution maps for a wide variety of species, including plants, insects, spiders, reptiles, amphibians, fish, corals, barnacles, sea urchins, and many other marine invertebrates. Along the way, they encountered more than 300 species that appear to be new to science, including such notable finds as a cicada that makes a distinctive "laughing" call, a deep-sea swell shark that inflates its stomach with water to bulk up and scare off other predators, a starfish that exclusively eats sunken driftwood, three new lobster relatives that squeeze into crevices instead of carrying shells on their backs, a crab whose pincers are lined with needle-like teeth, and a worm-like pipefish that hides among colonies of soft coral. Many of the new species avoided previous detection because of their diminutive size, such as goblin spiders, sea slugs, and barnacles that all measure just a few millimeters in length. Others simply exist in places that are rarely, if ever, visited by humans, such as a snake eel from the bottom of the ocean and a primitive plant called a spikemoss from the dangerously steep upper slopes of Mt. Isarog. All of the new species add weight to the idea that the Philippines is a critically important haven for biodiversity, and that its waters likely house more species than any other marine environment on Earth.

Unlike the traditional expedition model, in which results are often not published or shared until months or years after the field work has concluded, the participants in the Academy's 2011 Philippine Biodiversity Expedition began the process of communicating about their results while they were still in the Philippines. With the help of a team of Academy educators, they conducted outreach sessions in each of the communities closest to the expedition's survey sites, sharing their preliminary findings with local teachers, politicians, and conservation workers. At the end of the expedition on June 8, they held a full-day symposium at the University of the Philippines to share these results more widely and discuss initial conservation recommendations. Since then, the scientists have integrated their data and provided a formal recommendation to key partners such as Conservation International, the Philippines Protected Areas and Wildlife Bureau, the Philippines Department of the Environment and Natural Resources, and the Bureau of Fishers and Aquatic Resources outlining the most important locations for establishing or expanding marine protected areas, as well as suggested areas for reforestation to reduce sedimentation damage to the reefs. They also identified reduction of plastic waste as a conservation priority, since plastic litter was pervasive throughout the marine environment, even on the ocean floor at depths of over 6,000 feet. Additionally, the team's terrestrial surveys and species lists will help UNESCO and other conservation organizations make a compelling case for funding to enforce the existing protected areas on land, many of which are currently only "paper parks" with no means of preventing deforestation, hunting and other technically prohibited activities.

Over the next few months, the expedition scientists will be hard at work analyzing the specimens they collected during their field work—and undoubtedly discovering more new species along the way. In the meantime, they will present their preliminary results to the San Francisco public for the first time on June 30, during the Academy's weekly NightLife event.

Expedition NightLife
Thursday, June 30
6 - 10 pm
This week, NightLife celebrates the Academy's landmark research expedition to the Philippines. See specimens from the expedition, hear from participating scientists, and gain a new appreciation for what it takes to discover a new species of sea slug, spider, or sea urchin...and why it matters. Filipino music, folk dance performances, and island-inspired cocktails round out the night.
55 Music Concourse Drive, San Francisco, CA 94118
$12 per person ($10 for Academy members). For ages 21+ with valid ID only. Tickets available at the door or at www.calacademy.org

The California Academy of Sciences is an international center for scientific education and research and is at the forefront of efforts to understand and protect the diversity of Earth's living things. The Academy has a staff of over 50 professional educators and PhD-level scientists, supported by more than 100 Research and Field Associates and over 300 Fellows. It conducts research in 11 scientific fields: anthropology, aquatic biology, botany, comparative genomics, entomology, geology, herpetology, ichthyology, invertebrate zoology, mammalogy, and ornithology. Visit research.calacademy.org.