Watch a colorful nudibranch crawl across your desk, be circled by a green sea turtle, get eye-to-eye with a laced moray eel, and more using new Snapchat Lenses 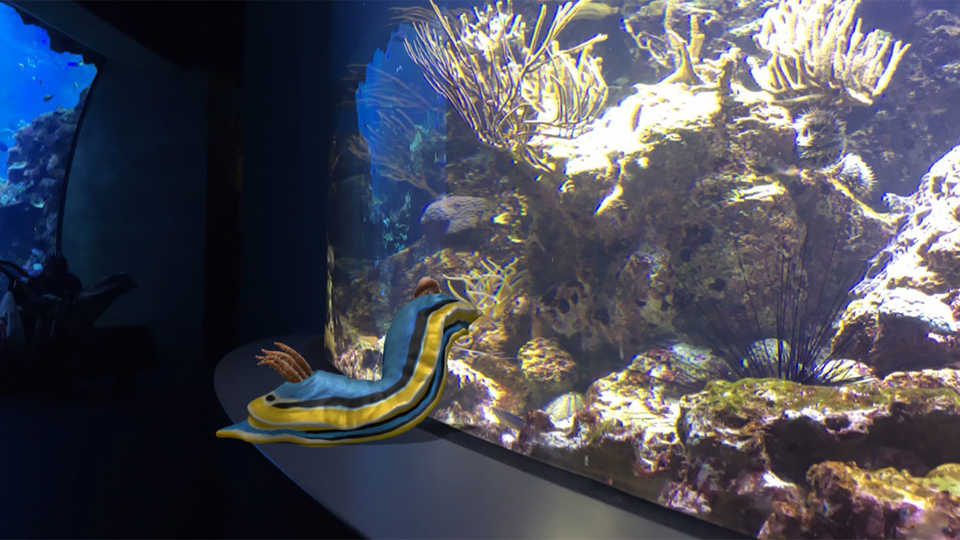 With the Academy's new Snapchat Lenses, take a colorful and charismatic nudibranch wherever you go.

SAN FRANCISCO (June 19, 2018)—The California Academy of Sciences in San Francisco has released its first set of augmented-reality Lenses, allowing any Snapchat user to transform the world around them into an immersive coral reef. Within the Snapchat camera, users can watch a colorful nudibranch crawl across their desk, be circled by a green sea turtle, get eye-to-eye with a laced moray eel, and more. The Academy's new coral reef Lenses also represent the first known application of this technology by a scientific institution. To unlock these experiences, just tap the links below or scan the Snapcodes with the Snapchat Camera.

These augmented reality animations were created by the Academy’s in-house Visualization Studio, the talented team of animators, producers, and science visualization experts behind Morrison Planetarium’s original, award-winning productions. The team created realistic and scientifically-accurate virtual reef creatures through close collaboration with Academy scientists and photo and video reference footage captured on Academy expeditions around the world. Each of the five lenses highlights a scene from the Academy’s newest planetarium show, Expedition Reef, which explores the biodiversity of the world’s coral reefs and how scientists are working to sustain them for the future.

"Expedition Reef is all about corals and the ​fascinating ecosystems that they support. We wanted to create lenses that truly bring coral reefs to life. ​From the damselfish that find shelter among the branches of an elkhorn coral to the tiny copepods that help nourish a single coral polyp, we tried to create lenses that would illustrate the complex relationships that occur on a reef," says Ken Ackerman, one of the Academy’s animators who worked within Snap’s Lens Studio software to develop the lenses. "We also wanted them to be ​entertaining​!​ After some experimentation we quickly found that the joy of holding a virtual nudibranch in the palm of your hand, or seeing a green sea turtle swim around you​,​ made these lenses irresistibly fun to use."

Expedition Reef, the inspiration behind the new Snapchat Lenses, is part of the Academy’s Hope for Reefs initiative, which aims to explore, explain, and sustain the world’s coral reefs by making fundamental breakthroughs in coral reef biology, developing new conservation and restoration techniques, and engaging the public through immersive exhibits and multimedia.

Description: Watch a pair of resident damselfish swim around an Elkhorn coral, one of the most important reef-building corals in the Caribbean, while trumpetfish drift among its branches. While damselfish use corals to establish algae patches to feed on, trumpetfish ambush small fish and lurking crustaceans.

Description: Meet a group of copepods! They’re the tiny crustaceans—just 1–2 mm in length—swimming in and around the gently waving tentacles of a coral polyp. But don’t get too attached. These polyps, which live in colonies that form coral structures, feed on the copepods, using microscopic hooks released from their tentacles to draw the unsuspecting crustaceans into their mouths.

Description: This charismatic nudibranch has a voracious appetite, dining exclusively on sponges. It makes its home in the “Coral Triangle”—an area of the western Pacific Ocean which includes the reef-rich waters of the Philippines, Indonesia, and Malaysia. At only 2–5 cm in length, this nudibranch doesn’t mess around: its bright colors help warn predators to stay away unless they want a toxic treat.

Description: Open wide! A moray eel receives a “dental cleaning” from bluestreak cleaner wrasses. These fish eat parasites that would otherwise make the eel sick. Providing dinner for some, and a clean bill of health for the other, it’s a win-win mutualistic relationship for all species involved.

Description: Look around to find a majestic green sea turtle swimming circles around you. These large turtles are found around the world in tropical and subtropical waters, including the Philippines, where the Turtle Islands are one of the species’ major nesting sites. They feed on sea grasses and algaes, which also act as nurseries for reef fish and invertebrates.