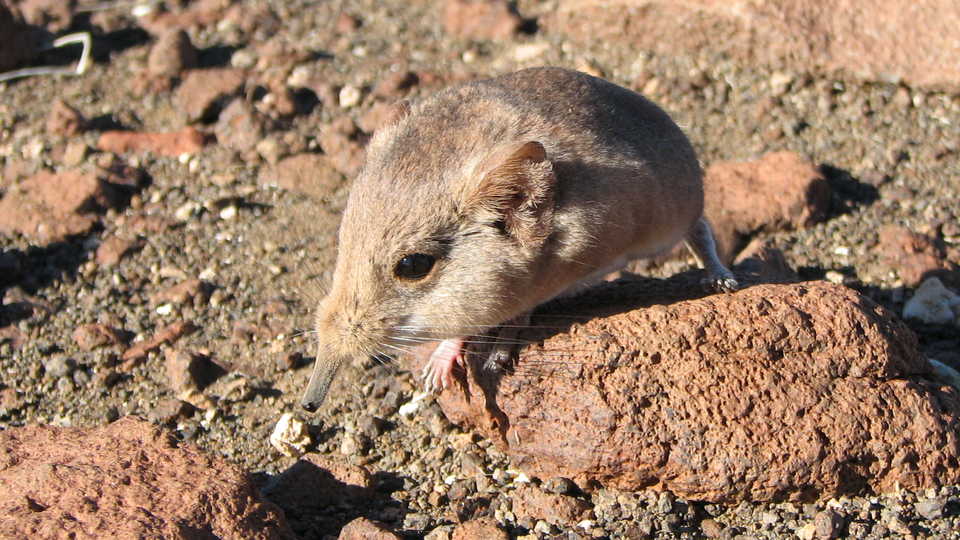 SAN FRANCISCO (June 26, 2014)—Scientists from the California Academy of Sciences have discovered a new species of round-eared sengi, or elephant-shrew, in the remote deserts of southwestern Africa. This is the third new species of sengi to be discovered in the wild in the past decade. It is also the smallest known member of the 19 sengis in the order Macroscelidea. The team's discovery and description of the Etendeka round-eared sengi (Macroscelides micus) is published this week in the Journal of Mammalogy.

While collecting and examining sengi specimens from southwestern Africa, Drs. Jack Dumbacher and Galen Rathbun encountered an unusual specimen collected in the remote northwestern region of Namibia that differed in appearance from any of the museum specimens that they had examined previously. The specimen was significantly smaller, had rust-colored fur, a large, hairless gland on the underside of its tail, and lacked dark skin pigment. Preliminary genetic analysis also showed important differences between this specimen and close relatives.

Suspecting they may have encountered a new species, the team—including research colleagues in Namibia, Timothy Osborne (California Academy of Sciences), Michael Griffin (Republic of Namibia Ministry of Environment and Tourism), and Seth Eiseb (National Museum of Namibia), all co-authors on the paper—set out on nine expeditions between 2005-2011. In total, the team collected 16 specimens for comparative analyses.

Comparing the specimens to those in natural history collections in Windhoek, Pretoria, London, Los Angeles, and the Academy in San Francisco, and further genetic analysis, confirmed that they had, in fact, found a new species, demonstrating the critical role that scientific collections play in biodiversity studies.

"Had our colleagues not collected those first invaluable specimens, we would never have realized that this was in fact a new species, since the differences between this and all other known species are very subtle," says Dumbacher, the Academy's Curator of Ornithology and Mammalogy. "Several museum collections were instrumental in determining that what we had was truly new to science, highlighting the value of collections for this type of work. Genetically, Macroscelides micus is very different from other members of the genus and it's exciting to think that there are still areas of the world where even the mammal fauna is unknown and waiting to be explored."

Sengis are restricted to Africa and, despite their small size, are more closely related to elephants, sea cows, and aardvarks than they are to true shrews. Found in a remote area of Namibia, on the inland edge of the Namib Desert at the base of the Etendeka Plateau, scientists believe this new species went undescribed for so long because of the challenges of doing scientific research in such an isolated area. Yet it is precisely this isolation, and the unique environmental conditions in the region, that have given rise to this and other endemic organisms.

An Etendeka round-eared sengi specimen has been added to the Namib Desert diorama exhibit in the Academy's African Hall, part of its natural history museum. It joins a replica of Welwitschia mirabilis, an ancient plant also endemic to the Namib Desert that may live for up to 2,500 years. The plant's wide, drooping leaves provide important habitat for other endemic species, such as the black-and-yellow spotted firebug (Probergrothius sexpunctatus).

"With only about a dozen new species of mammal discovered in the wild each year, it is amazing that the Academy has been involved in describing three new sengis in the last decade," says Rathbun, an authority on the biology of sengis and an Academy Fellow and Research Associate. "There are new and exciting insights into biodiversity awaiting discovery, even in a group as familiar as mammals."

Dr. Galen Rathbun is one of the world's foremost experts on sengis. For more information about sengis and their biology, visit www.sengis.org.