Summer music series returns to the Academy from July through October 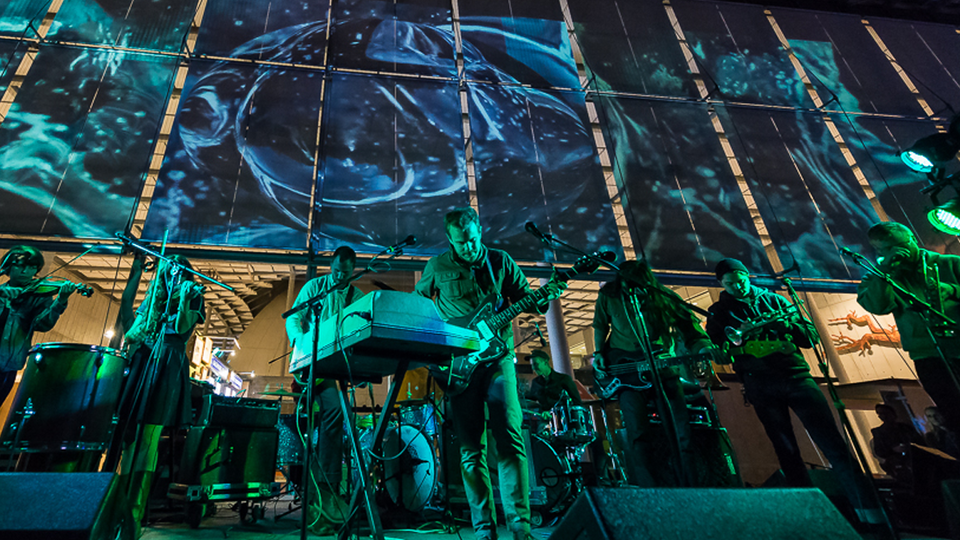 This year’s NightLife LIVE events will take place on July 12, August 9, September 13, and October 11, in addition to the Academy’s regular NightLife events held every week. Co-presented by Noise Pop and in partnership with Outside Lands and Treasure Island Music Festival, NightLife LIVE pairs emerging bands and musicians with cutting-edge visual artists in an immersive intersection of science, music, and art. The only museum in the world to combine an aquarium, planetarium, natural history museum, and living rainforest, live performances on an outdoor stage transform the Academy into one of San Francisco’s most unique live music venues in the heart of Golden Gate Park.

Concert goers can keep their senses stimulated between sets, exploring new featured artists and projects each week from the Bay Area’s most buzzworthy art collectives and studios. From mesmerizing light shows to special art installations from Taylor Dean Harrison and other Bay Area artists to VR experiences by Dream Logic and Vision Quest offering new perspectives on the natural world. Each NightLife LIVE event will also feature hands-on, science-inspired crafts and creativity workshops with Paint Pens Collective. Plus, NightLife LIVE will host rotating pop-up shops from local vendors like Amoeba Records and each event will feature a “one-night-only” custom design with screen printing by San Franpsycho.

Want to hear all NightLife LIVE featured artists in one place? Check out the all new series playlist and get show-ready. See below for the full lineup:

Music by Com Truise with The Seshen; DJ set by Chulita Vinyl Club

NightLife LIVE kicks off on the Academy’s outdoor stage with an electro-charged set by synthwave star Com Truise. Bay Area-based six-piece The Seshen will open up the evening with a selection of future soul and synth-based R&B sounds. The national “all-girl all-vinyl” collective, Chulita Vinyl Club, keeps the party going inside the museum all night long.

In partnership with Outside Lands Music Festival

East Bay rapper Caleborate, named one of Complex’s Best New Musicians in 2016, kicks off the night with tracks from his highly-buzzed-about latest album, 1993. Oakland-based all-female vinyl club B-Side Brujas will bring all the vibes with old-school soul and funky R&B throwbacks throughout the night. Headliner announcement coming soon!

This week, get ready to get down to the inspired sounds of LA-based DJ duo CLASSIXX, whose ultra-inventive remixes and original uptempo tracks alike have earned them a cult following. SF electro-pop artist SUMif will get the party started with infectious, dance-inducing tracks from her 2018 release Pretty Cage. Around the museum, Sweater Funk DJs will keep the groove going with 80s funk and boogie.

Close out your San Francisco summer with the final NightLife LIVE performance of the year from folk-rock singer-songwriter Kevin Morby. He’ll bring guitar-soaked tracks from his latest album City Music, which Pitchfork lauded for its “elegant, dusky atmosphere.” Bay Area-based musician Hannah van Loon will bring her latest solo project Tanukichan to the stage in all its dream pop glory. The national “all-girl, all-vinyl” collective, Chulita Vinyl Club, keeps the party going inside the museum all night long.

What: NightLife at the California Academy of Sciences (for adults ages 21+)

For full details on this year’s NightLife LIVE series: https://www.calacademy.org/nightlife-live