The California Academy of Sciences uses next generation sequencing technology to define a turtle “tree of life,” linking turtles to dinosaurs 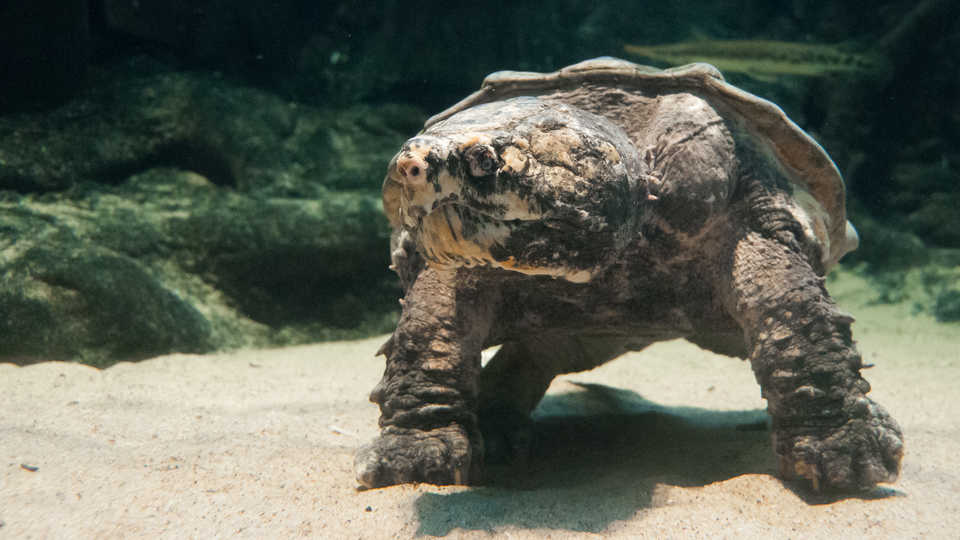 SAN FRANCISCO (November 24, 2014) —Turkeys and T. Rex can now add turtles to their list of closest relatives. A team of scientists, including researchers from the California Academy of Sciences, has reconstructed a detailed “tree of life” for turtles, placing them firmly in a newly-named group with their closest relatives: birds, crocodiles and dinosaurs.

The specifics of how turtles are related—to one another, to other reptiles, and even to dinosaurs—have been hotly debated for decades. Next generation sequencing technologies in Academy labs have generated unprecedented amounts of genetic information allowing a thrilling new look at turtles’ evolutionary history. These high-tech lab methods revolutionize the way scientists explore species origins and evolutionary relationships, and provide a strong foundation for future looks into Earth’s fossil record.

Research results, appearing in Molecular Phylogenetics and Evolution, describe how a new genetic sequencing technique called Ultra Conserved Elements (UCE) reveal turtles’ closest relatives across the animal kingdom. The new genetic tree uses an enormous amount of data to refute the notion that turtles are most closely related to lizards and snakes. Instead, authors place turtles in the newly named group “Archelosauria” with birds, crocodiles, and dinosaurs. Scientists suspect the new group will be the largest group of vertebrates to ever receive a new scientific name.

The UCE technique used in the Academy’s high-tech labs allowed scientists to move beyond years of speculation and place the Archelosauria group in its rightful place on the reptile tree of life. UCE—which, as its name suggests, involves comparing highly conserved regions of genomes across evolutionarily distant taxa—has been available since 2012, yet scientists are just beginning to tap its potential.

“Calling this an exciting new era of sequencing technology is an understatement,” says Brian Simison, PhD, Director of the Academy’s Center for Comparative Genomics (CCG) that analyzed the study’s massive amount of data. The CCG is a state-of-the-art facility comprised of a sequencing lab, frozen DNA collection, and computing resources that serves as the Academy's core genetic center. Established in the summer of 2008, the CCG continues to accelerate the Academy’s efforts to reveal evolutionary relationships and processes on a global scale. “In the space of just five years, reasonably affordable studies using DNA sequencing have advanced from using only a handful of genetic markers to more than 2,000—an unbelievable amount of DNA,” adds Simison. “New techniques like UCE dramatically improve our ability to help resolve decades-long evolutionary mysteries, giving us a clear picture of how animals like turtles evolved on our constantly-changing planet.”

Major findings also resolve an evolutionary mystery surrounding softshell turtles—a bizarre group of scale-less turtles with snorkel-like snouts. Until now, studies linked softshell turtles with a smaller semi-aquatic group called mud turtles, despite the fact that softshells appear in the fossil record long before their mud-loving counterparts. The Academy’s study places softshells in a league of their own on the evolutionary tree, quite far removed from any turtle relatives. Their long independent history helps explain their striking looks as well as their ancient presence in the fossil record.

Study coauthor James Parham, PhD—Academy Research Associate, Assistant Professor of Geological Sciences at Cal State Fullerton, and renowned turtle expert—says cutting-edge testing techniques bring a new level of clarity to more than two decades of his turtle research. With large amounts of data backing up each evolutionary branch on the turtle tree of life, scientists are able to compare their evolution not only across species, but also across each continent’s corresponding fossil records.

"I have been working on the evolutionary relationships of turtles for over 20 years using a variety of methods,” says Parham. “Fossils are essential for showing us what extinct turtles looked like, but also in letting us know when and where they lived in the past.”

Parham notes that studying turtle fossils—particularly the physical features of their bones—hasn’t always painted an accurate evolutionary picture of turtle relationships across continents and through time. “The turtle tree of life based on fossil turtle anatomy didn’t match up with the timing of their appearance in the fossil record, as well as their geography,” Parham says. “But the tree of life generated at the Academy’s CCG is consistent with time and space patterns we’ve gathered from the fossil record. These new testing techniques help reconcile the information from DNA and fossils, making us confident that we’ve found the right tree.”

The California Academy of Sciences is committed to research that unlocks evolutionary mysteries of the natural world. Next-generation advancements used in the Academy’s CCG sharpen the way we visualize the past, present, and future of life on Earth, and serve as a blueprint for international excellence in large-scale research.

The Institute for Biodiversity Science and Sustainability at the California Academy of Sciences is at the forefront of efforts to understand two of the most important topics of our time: the nature and future of life on Earth. Based in San Francisco, the institute is home to more than 60 research scientists and aquarium biologists, as well as 45.6 million scientific specimens from around the world—nearly 40,000 of which are alive and on display in the Academy's Steinhart Aquarium. The institute also leverages the expertise and efforts of more than 100 international Research and Field Associates and 300 distinguished Fellows. Through expeditions around the globe, captive breeding programs, and investigations in the lab, the institute's scientists strive to understand the evolution and interconnectedness of life. Through these same efforts, as well as through partnerships, community outreach, and public engagement initiatives, the institute aims to guide critical conservation decisions and address the challenge of sustainability. Visit www.calacademy.org for more information.