Transition from Land to Sea. 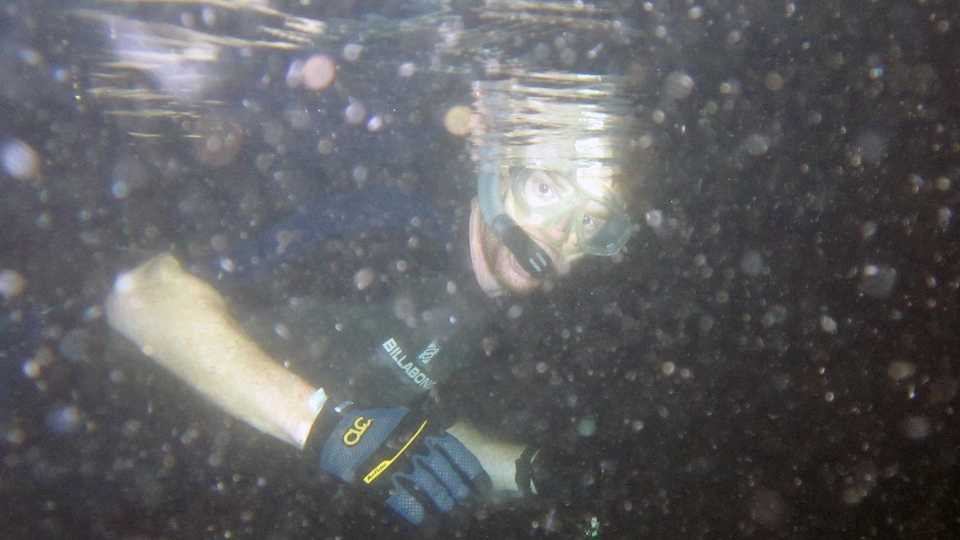 I had a fantastic two + weeks with the Terrestrial Team. They summited Mt. Banahaw as I moved to Anilao to join the Academy's aquatic biology research team. The snorkling and diving here is unbelievable. The forested slopes of Mt. Banahaw are treacherous and, for the most part, without trails. Travel is by foot and machete. The leech burden was too small to continue my experiments with nylons. Plus, they are too hot to wear in this climate. The botany team collected more than 300 samples on Mt. Banahaw, while the entomology/arachnology team collected more specimens than I could count.

It was hot and muggy on the mountain and I couldn't help but think about our patients at the VA Medical Center up the street from the Academy. I've heard many of their stories while at work there and I still can't imagine what it must have been like to live in the jungle with, baseline, dangerous conditions and in fear of illness or injury from combat. Illness (most commonly, diarrhea and febrile illnesses such as malaria) and injury are common during expedition travel, even in ideal conditions.

To date, from a medical standpoint, we have been lucky about major trauma in the field. The worst injury, thus far (and for the entire expedition, I hope) occurred when a porter caught a machete by the blade. The injury occurred late in the afternoon, far from camp (about 2 hours hike). By the time we got back it was dark. During exploration of the wound and irrigation with more than a liter of sterile saline, my headlamp and the other lights were attracting insects to the surgical field. It was an anxiety provoking injury for both him and me. He could not feel three fingers (thumb, index and middle) when pricked with a sharp needle, compared to brisk hand withdrawal when his ring and little fingers were pricked with the same pin.  I couldn't find any obvious nerve injury on exploration of the wound.  I suspect he had spasms of the underlying muscles or the nerve was struck, but not cut. He did well, with return of normal sensation within 24 hours and no infection after 4 days.

Additionally, during a deep dive, one of our crew was envenomed by a large lion fish. The pain was excruciating and the currents strong. It was about 3 hours to get to shore and by the time he arrived at camp, the pain had spread from his lower leg to his knee and hip. The venoms in the family are protein-based and effectively treated by immersion in warm water (not more than 115 degrees Fahrenheit). The heat denatures the proteins and decreases the pain. At least three barbs penetrated his wet suit and he reported losing some power in his right foot because of the pain. In the conditions he was working, this type of impediment can create dangers much greater than the painful injury, itself.

Lion fish have invaded (i.e. been introduced by humans) to the warmer waters skirting the U.S. and Caribbean. Thus, lion fish stings are becoming significantly more common in areas outside their native waters. They are voracious predators and poorly controlled because their natural enemies are not present in their new habitats. We saw a similar thing in the forests of Mt. Banahaw in the form of cane toads...an invasive species from the America with a voracious appetite for endemic species and it has few predators here to keep their populations in check. They are not dangerous to humans like the lion fish, but are a distressing sight in the rain forest knowing they are potentially permanent residents.

At a dive site near Anilao nicknamed "Basura" (Trash), divers found incredible quantities of trash intermingled with the corals and fish life. Included among these discarded objects were a headless Ken doll and a green, stuffed Tele-Tubby.  Every piece of garbage reminds me that our children might not have the same privileges we have had on this visit to the beautiful and hospitable Philippines--Save Our Planet!

Finally, with respect to this part of my commentary I want to raise awareness of several disturbing events that occurred during May: First, a park ranger from the Mt. Makiling preserve was murdered after reporting illegal squatters and poachers in the forest. This occurred in broad daylight, in front of the courthouse in Los Banos. The work of conservation is highly political and is in direct conflict with lucrative, illegal practices such as poaching. On the slopes of Mt. Banahaw, Dr. Darin Penneys and I came upon a loaded civet (endangered cat) trap in the forest. Later in the week, when the birds and mammals team joined the Botany/Entomology crew on the mountain, mist nets used to catch, tag and release flying animals were stolen. The work and logistics of field work are hard enough without these additional complications.

On this expedition, the typical day starts at sunrise (~0600) and often ends well after midnight because data have to be processed. The incredible volume of information that needs to be recorded, transferred to computers and stored with accuracy is a labor intensive activity taking place each night after field work is completed for the day. Keeping up takes significant mental and physical discipline as any delays in data transfer processing increases the risk of error and confusion, later. Also, procrastination would result in an unmanageable volume of work. The Cal Academy crew and our colleagues from the University of the Philippines are true professionals: They get this job done every night no matter how tired they are from the exertion of the day's work. It is a simple concept, but far from easy!

I've been away from the forest for almost a week and already it feels like a long time ago. The ocean life in Anilao is magnificent, but I miss the forest and my botany and invertebrate (scientist) friends, already. I can hardly wait to see my family and share my experiences with them. Similarly, I can hardly wait to revisit the Philippines. I have more than 20 expeditions under my belt and I've never seen worked with such a fascinatingly diverse group of scientists in one place as extraordinary as this one.

Briefly:  I have received several inquiries about whether the application of insect repellent should precede or follow the application of sunscreen. Traditional teaching is that insect repellents (e.g. DEET-based products) should be applied after sunscreen. The evidence for this is unclear from the literature as I interpret it. Both insect repellent and sunscreen require multiple applications during the day and both seem to have the intended effect when they are applied diligently. In my experience, complete coverage by clothes is the most effective way to keep the sun and pests away from skin. Please send your questions and comments to me, here, and/or to the Center for Exploration and Travel Health at the California Academy of Sciences (CETH). I will try to answer them, promptly.