One Big Disaster, Two Small Birds, and a Mystery in the Stacks

Happy May! T.S. Eliot famously wrote “April is the cruelest month,” and when I look back on 160 years of the California Academy of Sciences, I am inclined to agree with that sentiment. The Library and Archives are involved in preserving and sharing the history of the Academy, and we all know quite a bit about April 18, 1906 and the massive earthquake and devastating fire that destroyed nearly all of the Academy’s collections. After the fires were extinguished, the Academy had 1497 botanical types, saved by Alice Eastwood, the original Minutes of Academy meetings, some other historical records and specimens, and two Guadalupe Storm Petrels (Oceanodroma macrodactyla). 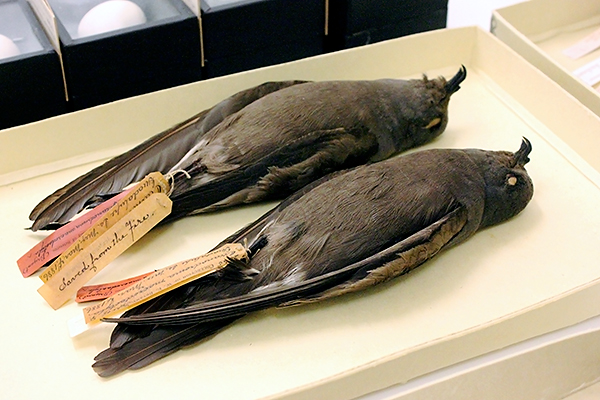 The photos above show Oceanodroma macrodactyla specimens housed in Ornithology & Mammalogy. The tags on the specimens read "Saved From The Fire" 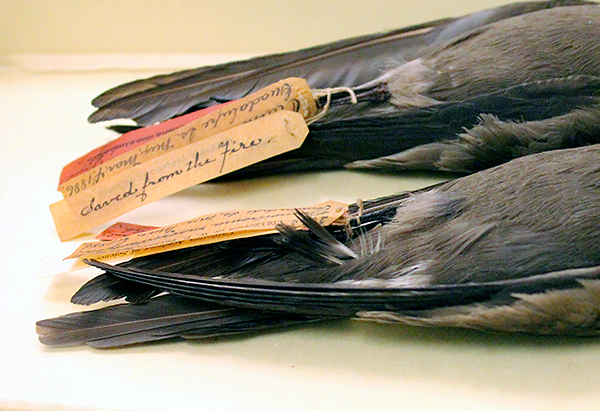 When I have occasion to talk about Academy history (a regular occurrence), I have rarely given much thought to any books or other print matter that may have been rescued besides the Minutes and a valuable manuscript by Theodore Henry Hittell. We are grateful to have those, as they inform much of what we know about the founding and early days of the Academy. And to be honest, I never like to think very hard about all of records and literature lost in the disaster. But, I always bring up Alice Eastwood, and I always mention these two petrels, which were saved by the Academy’s Director Leverett Mills Loomis. Loomis studied this variety of seabird, and possessed excellent foresight in securing the type specimen (described by W.E. Bryant in 1887) as O. macrodactyla would cease to be seen alive in the wild after 1911. But the birds are small, and I imagine the chaotic, post-earthquake scene of Mary Hyde rescuing the heavy, unwieldy books of Academy Minutes, and Alice Eastwood, working with a friend to tie up and save nearly 1500 herbarium sheets, while Director Loomis plucks just two small birds and then…gives up? I turned to some letters that Loomis wrote to naturalist Edward W. Nelson of the U.S. Department of Agriculture and later the U.S. Biological Survey, which are reprinted here and were also sent anonymously and published in a lightly-censored form in Science in May 1906. In one of these letters, dated May 7, 1906, Loomis writes:

"As a starter for the bird collection I selected the types of Oceanodroma macrodactyla and as the beginning of the bird library I took your favorite Des Meers. As I wanted to be the first donor to the Academy's new ornithological library, I put Brown's illustrations under my arm as I passed the store-room. So you see we made a beginning before the end had come."

So, it would seem that Loomis was not stingy with his rescue efforts, and instead managed to save both the two Guadalupe Storm Petrel specimens collected by Bryant and two books. Upon review, it became clear to me that Loomis was referencing Marc Athanse Parfait Oeillet Des Murs’ Iconographie Ornithologique, a magnificently illustrated work from the 1840s, of which the Academy Library has a beautiful copy. 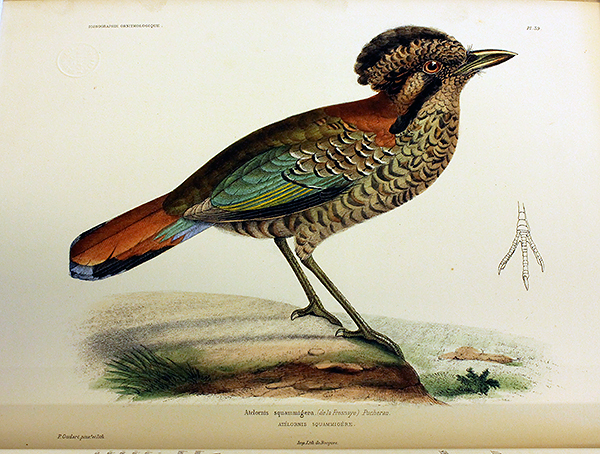 Above, plate of the Scaly Ground Roller (Geobiastes squamiger) of Madagascar, from Des Murs' Iconographie Ornithologique When I pulled it from the book from the shelf, I noticed for the first time the notation on the bookplate, stating “SAVED.” 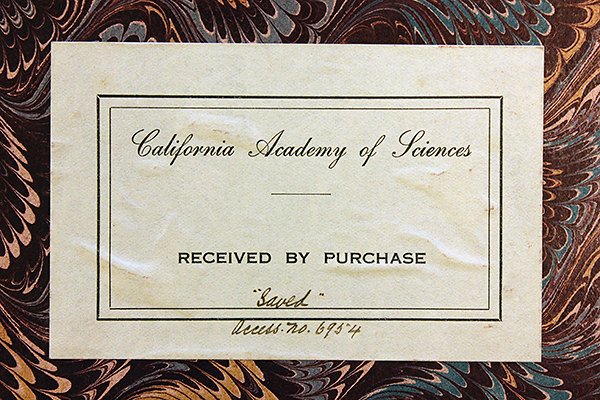 The reference to “Brown” proved more of a mystery, and one that I will revisit shortly in another blog entry. Stay tuned!