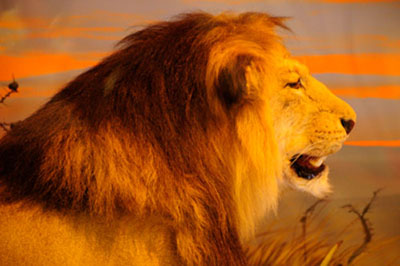 Roam the vast savanna with lions and elephants. Trek though mountain rainforests in search of gorillas. Watch playful penguins as they frolic on Boulders Beach. Check out the following books, DVD and specimens in the Naturalist Center, as well as other resources. Then see live animals and specimens from Africa in our African Hall exhibit.

"Safari" means journey in Swahili, and what a wild and wondrous journey you’ll take when you join 6th grader Carey on his adventures in Africa. Reluctantly dragged across the ocean on a trip to Kenya with his wacky Aunt Elaine, a fashion photographer, Carey quickly loses her and travels overland instead with a Maasai guide, and his son. Traveling from Amboseli National Park to the Maasai Mara Reserve, the reader learns about African wildlife and the Maasai way of life along with Carey, as well as becoming entangled in a plot to stop poachers trying to steal precious rhino horns. Written in a humorous and informative style and replete with drawings, photographs and side-notes, the reader quickly becomes immersed in the sights and sounds of Africa. An author’s note at the end of the book also provides background information. Recommended for grades 3-6.

Political turmoil. Clashes with poachers. Death threats. Who knew wildlife management was such a daring and tumultuous job? In 1989, Richard Leakey quickly found this to be true when President Moi appointed him head of Kenya’s Wildlife Department, "which was in desperate financial straits and rife with corruption and inefficiency." Leakey initially had gained international fame for his human anthropological finds in Africa, following in the footsteps of his renowned parents, but in this memoir he explores the challenges he faced and successes he achieved while moving into the role of conservationist. In an engaging and highly personal style, he describes his crusade to end the ivory trade and save one of his nation’s treasures, the elephant, along with his work to establish the Kenyan national park system as a model for balancing the needs of humans with protecting wildlife. Recommended for anyone interested in exploring the political, social and environmental complexity of conservation in Africa.

Can a family of caracals that were raised in captivity learn the necessary skills to return to the wild? Rescued from the exotic pet trade and cared for at a wildlife center in England, these caracals are reintroduced in a nature reserve near Hoedspruit Air Force Base in South Africa. In an innovative approach to wildlife management and conservation, the wild cats were chosen to be placed here to help control the bird population in the area, which can wreak havoc on the planes flying in the area. Bird-airplane collisions are frequent and often birds get sucked into the engines of planes causing severe damage to the plane and endangering the pilots. Rather than just eliminating all of the birds in the area, however, the South African government is attempting to find a way to live with nature. With amazing footage of the caracals, including their leaps of up to 10 feet into the air to catch birds, the DVD is highly recommended for anyone with an interest in wild cats and the issues surrounding captive breeding and the reintroduction of species. Also includes a booklet with extensive background information on caracals, including their range, behaviors and historical associations with humans. A wonderful introduction to a little known feline found in Africa.

Read an engaging book or seen a fabulous movie about Africa? Share the title and why you liked it with us below in our comments section. 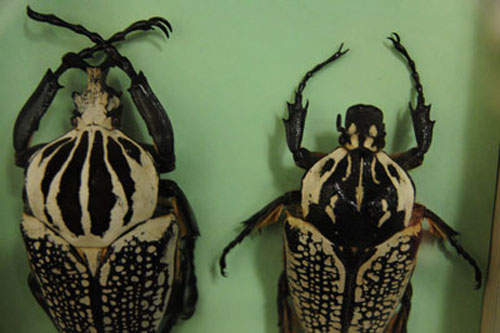 Africa isn’t just home to the heaviest land animal in the world; it’s also home to some of the heaviest insects. Goliath beetles (Goliathus species) can weigh 100 g (nearly a 1/4 lb.), with males being slightly larger than females. Males also have a longer, horned head that they use as pry bars in territorial battles. Those who manage to flip over their opponents get access to feeding sites and females. Females have a shorter, spade-shaped head for burying eggs.

Want to find out more about these and other African animals? Visit: