Extinction is Forever: Gone but not Forgotten

Since the beginning of life on earth, it is believed that 95% of all the species that have ever existed have become extinct. Biologists today are observing an unprecedented increase in the rate of extinctions, especially since the beginning of the industrial age and the expansion of human populations. It appears that human activities are responsible, either directly or indirectly for much of this, due to habitat loss, invasive species, pollution and global warming. These issues have been brought about by urbanization, industrialization, globalization and an ever-increasing human population.

Sadly, San Francisco can boast of having the first known species of insect in North America to go extinct due to human disturbance, the Xerces Blue Butterfly, Glaucopsyche xerces. 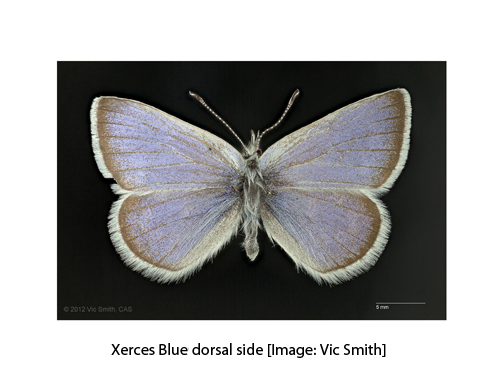 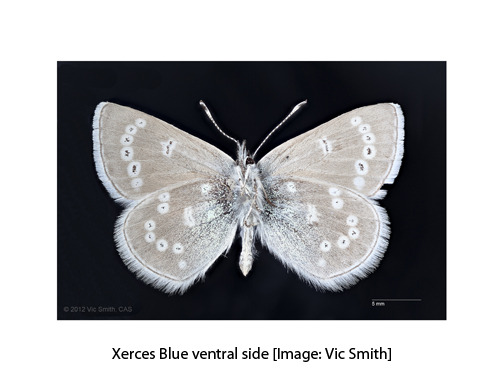 First described in 1852, the Xerces Blue is a member of the Lycaenidae (gossamer-winged butterflies), the world’s second largest family of butterflies. Their food plants are legumes in the genera Lotus and Lupinus, and the larvae were known to have a relationship with ants, in which the ants helped tend the larvae. The range of this species was small, found in the sand dune habitats around the Sunset District of our city. The last known specimens were collected in 1943, and some specimens reside in our collection. 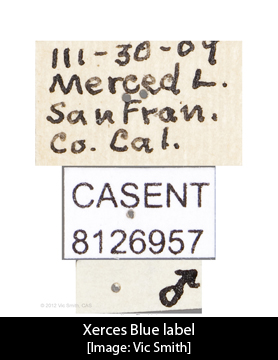 Though the exact reason or reasons for their loss remain unknown, habitat loss certainly played a part in their demise, as the dunes and vacant lots where they were found disappeared to development. Another possible reason was the introduction of the Argentine Ant, which may have displaced the species with which the larvae were associated with. Argentine Ants are now the most commonly found ant in the Bay Area, and are not known to have any association with butterfly larvae.

In 1971, the Xerces Society for Invertebrate Conservation was founded as a non-profit organization dedicated to the conservation and protection of invertebrate species in the United States.

Sadly, the Xerces Blue is not the only butterfly of San Francisco to go extinct, and I will explore these in future blogs.

Curatorial Assistant in Entomology, and Imaging Specialist at the Project Lab