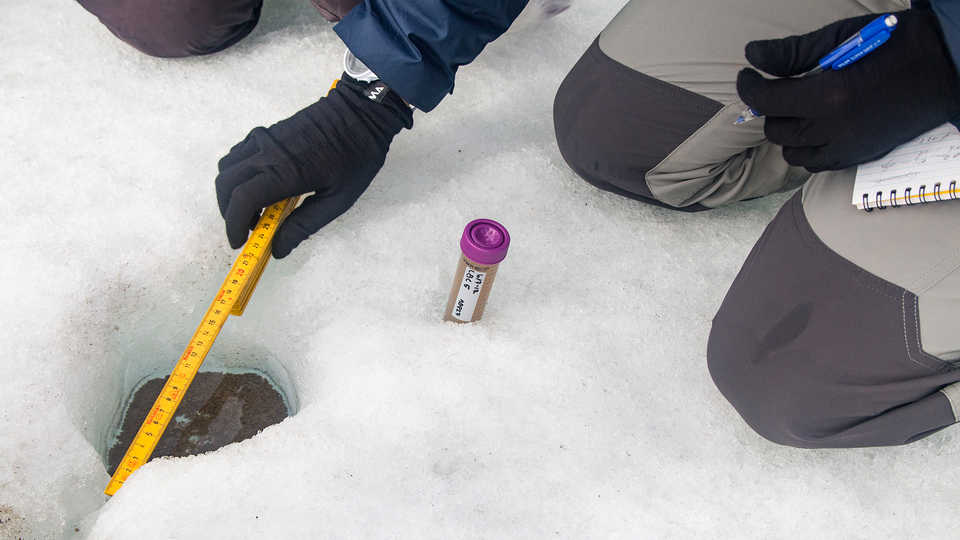 Once thought uninhabitable, Antarctica is now known to host a diverse array of ecosystems teeming with life. And the more scientists look, the more they seem to find. In recent years, they've been focusing on cryoconite holes — water-filled pockmarks on the surface of glaciers in which microorganisms and tiny animals thrive.

The holes form when windblown dust called cryoconite settles on the glacier surface. Cryoconite can originate from nearby mountains and tundra, or distant deserts, farmland, volcanoes, and industry. Upon landing, the dark dust absorbs heat and melts the ice or snow beneath it, creating a pool of melted water for lifeforms to live in.

The first arrivals in a cryoconite hole are likely to be windblown filamentous cyanobacteria. Carrying a cargo of dust, soot, dormant seeds, spores, and organic matter, they lay the ground for cold-adapted algae, fungi, and other bacteria which feed on biological matter. They in turn are followed by insect larvae, copepods, segmented worms, rotifers, and tardigrades (the 'big' predators at typically 1 mm in length).

Many of the cryoconite holes' denizens produce dark pigments, likely protecting them from high levels of ultraviolet radiation. It may also help make their environment more habitable by attracting more sunlight and heating it up. Much of the bacteria also possess mechanisms that strategically allow them to go dormant and later revive.

The resiliency of these creatures is of great interest to researchers. Their findings could have a significant impact on medicine among other areas. For example, the antifreeze proteins used by organisms to endure cold winters could one day be conceivably employed in drugs, vaccines, and even human organs to prevent them degrading in cold environments.