There's a lot of exciting science happening here at the South Pole, much of it astrophysics. The Pole's dry atmosphere, deep ice sheet, uninterrupted cycles of night and day, high altitude (9,301 feet / 2,835 meters) and low electromagnetic noise make this an ideal area to conduct such research.

A lot of that happens in these buildings, approximately a kilometer from the main station structure. The large white upright dish on the left is the new South Pole Telescope (SPT). The yellow dish on the right is the Degree Angular Scale Interferometer (DASI), part of the Martin A. Pomerantz Observatory (MAPO) named for a pioneer in Antarctic astronomy. DASI studies the cosmic microwave background radiation, the leftover glow from the Big Bang. Scientists look for anisotropies, or irregularities, in this glow for clues to the structures of the universe in its infancy.

Here I am in DASI's dish, on 35,000 pounds of telescopic equipment supported on an 11-meter high tower. I'm sensing anisotropies...

The newer, bigger, 300-ton South Pole Telescope is a project of the University of Chicago and six collaborating institutions. The 10-meter dish and its components reach 7 storeys high, constructed during the 2006-07 austral summer. The goal is to seek out galaxy clusters in hopes of confirming the existence of dark energy which would further reveal the nature of the universe. Similar to DASI, SPT maps cosmic microwave background radiation -- only more efficiently, given its array of one thousand detectors offering new levels of sensitivity and resolution. 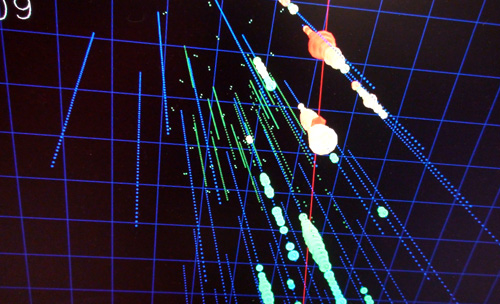 The IceCube Neutrino Observatory is another unique project. Borne by its predecessor AMANDA (Antarctic Muon And Neutrino Detector Array), thousands of spherical optical sensors are being vertically suspended like beads on a string in the Pole's 2-mile thick ice. Their job is to detect very high energy neutrinos from sources outside our solar system, allowing cosmologists to understand the nature of dark matter and other astrophysical phenomena. I ended up taking several pictures of this IceCube Event display showing neutrinos crashing into atoms of ice in real time. The colorful 3-D motion graphics and user's ability to manipulate point-of-view make spectacular representations of these collisions, whose resulting muons reveal the direction of the neutrinos' cosmic source indicated by the red path. Next: Spoolhenge (for real this time!) and the Pole's poles.