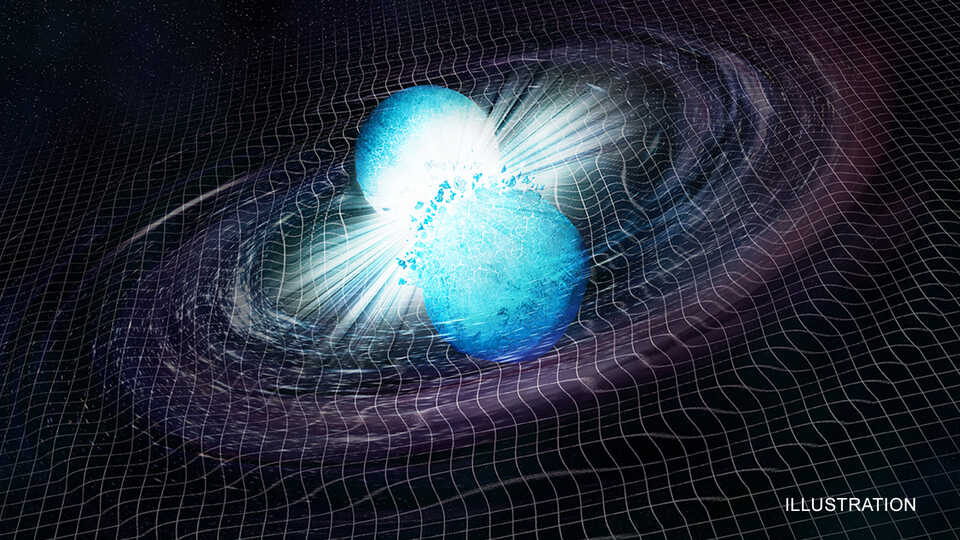 Last year, astronomers hit the jackpot. For the first time ever, humans observed two neutron stars colliding. We observed the gravitational waves and the light coming from this event—another huge first for astronomy. To quote the LIGO Scientific Collaboration, it was the first time a cosmic event was “observed with both gravitational waves and light.”

The event was systematically (and anticlimactically) dubbed GW170817.

What exactly happened? A long time ago, in a galaxy far, far away, two neutron stars spun towards one another. Their intense push and pull around each other sent ripples through spacetime, travelling across approximately 130 million light years to Earth. The Laser Interferometer Gravitational Wave Observatory (LIGO) and Virgo Interferometer (Virgo) observed these gravitational waves. The neutron stars spun closer and closer to one another, the signal pitch rose higher and higher, until—

That’s as far as we could read the story. Scientists made their guesses. Did the two neutron stars collide and collapse into a new black hole? Or did they merge into a single, larger neutron star? There were multiple potential plotlines, but not much closure.

Two scientists claim that the epilogue lies within the data. Maurice van Putten of Sejong University in South Korea and Massimo della Valle of Osservatorio Astronomico di Capodimonte in Italy examined gravitational wave data from LIGO and Virgo along with with data from the Fermi Gamma-ray Space Telescope (FGST).

The gravitational wave data indicates that the two neutron stars collided (we knew that part). From there, van Putten and della Valle say that the neutron stars merged into one hypermassive magnetar (a kind of neutron star), surrounded by magnetic fields more intense than almost any other object in the Universe. About 1.7 seconds into the merger, FGST observed a gamma-ray burst powered by energy from the violent neutron star merger.

This offers another hint into what happened to the two neutron stars. When something collapses into a black hole or neutron star, a lot of energy is released, more than our sun may release in its entire lifetime. But even though the gamma-ray burst was very high energy, it was still nowhere near the amount of energy that would have been released by a newly formed black hole.

The two scientists went back to the gravitational wave data. After filtering the data, they detected a second signal after the initial collision. Less than a second after the gravitational wave event, there was a smaller, descending chirp. This descending chirp is harder to make out, with a few jagged jumps in the curve. Part of this is due to the gravitational radiation tapering off, and/or due to interference from interactions with other material simultaneously being ejected from the collision. The problem is, this chirp’s frequency is too low to be coming from a newly forming black hole. Van Putten and della Valle argue that this energy signature is more indicative of one caused by a newly formed magnetar (hypermassive neutron star with an extremely powerful magnetic field quadrillions of times more powerful than Earth’s).

It’s quite a breakthrough. But the story remains a cliffhanger. We don’t know if the resulting magnetar survives as a pulsar or if it has since collapsed into a black hole.