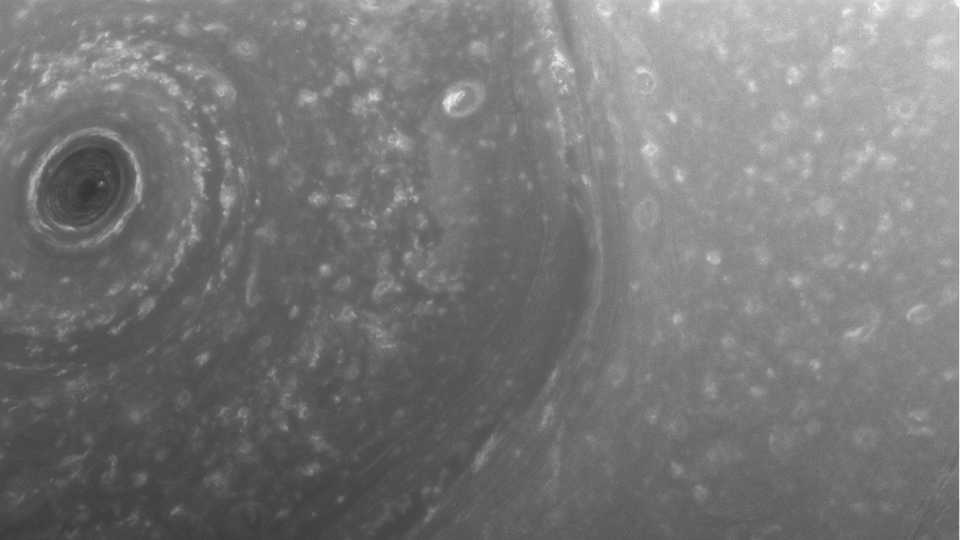 The formation of our solar system was turbulent, to put it mildly. Scientists study clues to this formation through neighboring bodies such as comets, asteroids, moons, and planets—and even through evidence that falls to Earth. Some of that evidence comes from chondrite meteorites—the most common meteorites that descend to Earth—which contain chondrules, tiny spheres of previously molten material. A rare subtype of those, CB chondrites, have long fascinated astronomers because their chondrules date back to a very narrow window of time in the early Solar System.

“The chondrules in other meteorites give us a range of different ages,” says Brandon Johnson of Brown University. “But those in the CB chondrites all date back to this brief period five million years after the first Solar System solids.”

Johnson and colleagues went hunting for the origins of these chondrites and published their findings today in Science Advances.

Researchers knew that these meteorites were formed as objects slammed into each other with incredible speed. They contain metallic grains that appear to have been condensed directly from vaporized iron. “Vaporizing iron requires really high-velocity impacts,” Johnson explains. “You need to have an impact speed of around 20 kilometers (12 miles) per second to even begin to vaporize iron, but traditional computer models of the early Solar System only produce impact speeds of around 12 kilometers (7 miles) per second at the time when the CB chondrites were formed.”

The team used computer simulations to see if Jupiter’s migration within the Solar System could increase the grains’ velocities. One scenario describing Jupiter’s migration, known as the Grand Tack (a term taken from sailing), suggests that the gas giant formed somewhere in the outer Solar System. Then, as it accreted its thick atmosphere, it changed the distribution of mass in the gassy solar nebula surrounding it. That change in mass density caused the planet to migrate, moving inward toward the Sun to about where the asteroid belt is today. Later, the formation of Saturn created a gravitational tug that pulled both planets back out to where they are today.

“When we include the Grand Tack in our model at the time the CB chondrites formed, we get a huge spike in impact velocities in the asteroid belt,” co-author Kevin Walsh says. “The speeds generated in our models are easily fast enough to explain the vaporized iron in CB chondrites.”

With this discovery, the findings also suggest that Jupiter was near its current size and sitting somewhere near the asteroid belt when the CB chondrules were formed.

“In retrospect, it seems obvious that you would need something like Jupiter to stir the asteroid belt up this much,” Johnson says. “We just needed to create these models and calculate the impact speeds to connect the dots.” —Molly Michelson

NASA’s schoolbus-size, Saturn-circling flagship, Cassini, has begun its next-to-last sequence of orbits around the giant, ringed planet, taking the spacecraft high above Saturn’s north pole, then punching through its equatorial plane. Swooping past the planet just beyond the outer edge of the main ring system, Cassini’s trajectory comes approximately 80,000 kilometers (50,000 miles) from the top of the planet’s hazy atmosphere.

After 20 such “ring-grazing” orbits, the spacecraft will swing near Saturn’s largest moon, Titan, on April 22, 2017, using that moon’s gravity to further modify its orbit and begin a final series of 22 even more daring loops—an audacious phase of the mission dubbed the “Grand Finale.” These final orbits will bring the spacecraft in closer still to Saturn, threading the 2,400-kilometer (1,500-mile) gap between the planet and the inner edge of its rings—which lies less than 6,600 kilometers (4,100 miles) from the cloudtops—and scientists anticipate receiving spectacular, closest-ever images of the rings and clouds, provided that it doesn't run into a sizable chunk of ring debris in a perilous region that no spacecraft has ever visited.

Launched in 1997, Cassini took seven years to reach Saturn, and at the time of this writing is beginning its 252nd orbit since 2004. If all goes according to plan, Cassini will end orbit 295 on September 15, 2017, with a fiery suicide-dive into Saturn’s atmosphere, where the vehicle will be destroyed as it plummets through the clouds. Following its policy of planetary protection, NASA decided to end the mission in this way to prevent any possible surviving microbes hitchhiking aboard the spacecraft from contaminating potentially life-friendly moons such as Titan or Enceladus, should Cassini blunder into them if left in orbit. The Jupiter-orbiting Galileo spacecraft ended its mission in the same cautious manner in 2003, to protect the water-bearing moon Europa (and a couple of others) from Earthly contamination.

Scientists hope that during the Grand Finale, measurements of Saturn’s gravitational and magnetic fields will reveal details about the planet’s internal structure and composition, helping them understand more about how giant planets form.–Bing Quock

We have talked about mapping dark matter before, ’way back in 2010. It’s a tricky prospect, since dark matter, by definition, doesn’t interact with light… Thus, it’s called “dark,” although it might be better to think of it as transparent matter. Because dark matter makes up something like 85% of all the matter in the Universe, mapping the stuff is critical to understanding the development of structure in the Universe. (By “structure,” I mean not just the familiar galaxies, stars, and planets but the cosmic web of material that we observe at the largest spatial scales). The gravitational influence of dark matter allows for the development of dense objects such as those aforementioned galaxies, stars, and planets. If it weren’t for dark matter, we wouldn’t be here.

So how do you search for something you can’t see? You search for its effect on things you can see—including light itself! It turns out that gravity bends light (not much, but a bit), so we can search for the miniscule effect of dark matter over extremely vast distances. Scientists have employed many complementary methods to create dark matter maps, resulting in blobby images that press officers colorize garishly in order to attract people’s attention.

Some astronomers may hang such images on their walls, but they’re more excited by extracting numerical data from the maps. (You can compare numbers more accurately than you can compare blobs.) And one intuitive measure is actually the blobbiness itself! Is the map characterized by big blobs, small blobs, or in-between sized blobs? Are the blobs evenly distributed or clumpy? And so on…

This is not just an exercise in mathematical tomfoolery. Understanding dark matter’s blobbiness (which you can also think of as clumpiness) tells us about the distribution of the matter that’s driving the formation of clusters of galaxies and galaxies themselves.

An announcement this week describes results from the latest dark matter survey—one which covers a spectacularly large fraction of the sky! Well, one percent, but trust me, that’s a sizable fraction compared to other surveys. And the findings came as a bit of a surprise because they contradict with the predicted dark-matter distribution based on data from the Planck satellite (one of those complementary methods I mentioned earlier, a different approach to estimating dark matter clumpiness). The new data suggest that the distribution of dark matter is smoother than previously measured.

(Fun fact: To avoid letting their preconceptions influence their results, the scientists did three times the work! They created two false sets of data and carried out their calculations on those in addition to the real data. Only when they were finished did they remove the blindfold to reveal which data were real.)

So, a not-so-lumpy universe probably won’t keep you up at night, but it might disturb the slumber of some cosmologists. A smoother distribution of dark matter means they need to refine their description of how the Universe developed over time… And they also need to figure out why the two techniques (Planck versus the new work) gave different results. There’s plenty more work to keep them from going to bed on time. –Ryan Wyatt 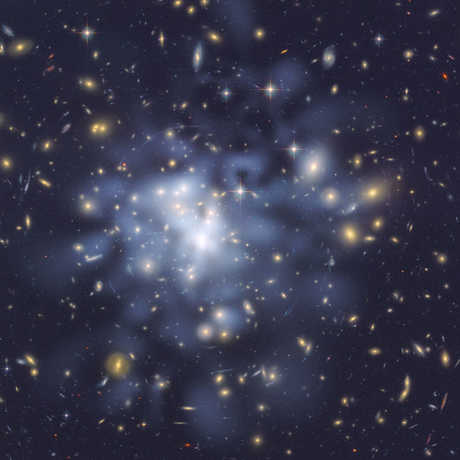 Seeing Dark Matter
Astronomers have made a detailed map of dark matter, allowing us to see it as never before!
image-standard 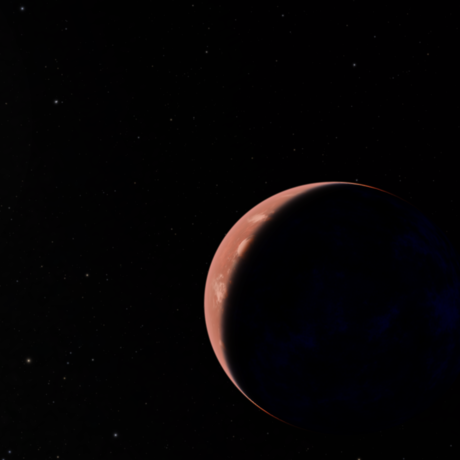 A Close, Habitable Exoplanet and a Dark Matter Galaxy

This week’s Space Friday includes a comet outburst, potentially habitable Proxima b, and a galaxy of dark matter 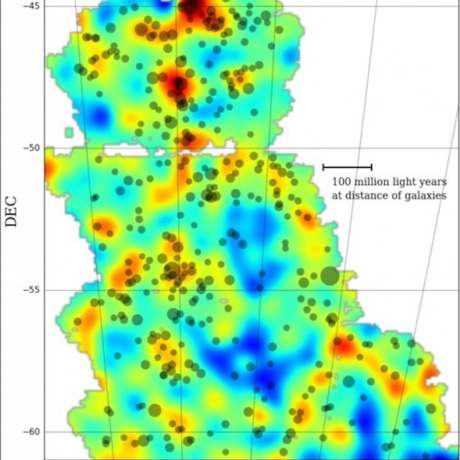 ... And other space news from this week, including brine on Mars and a map of dark matter.