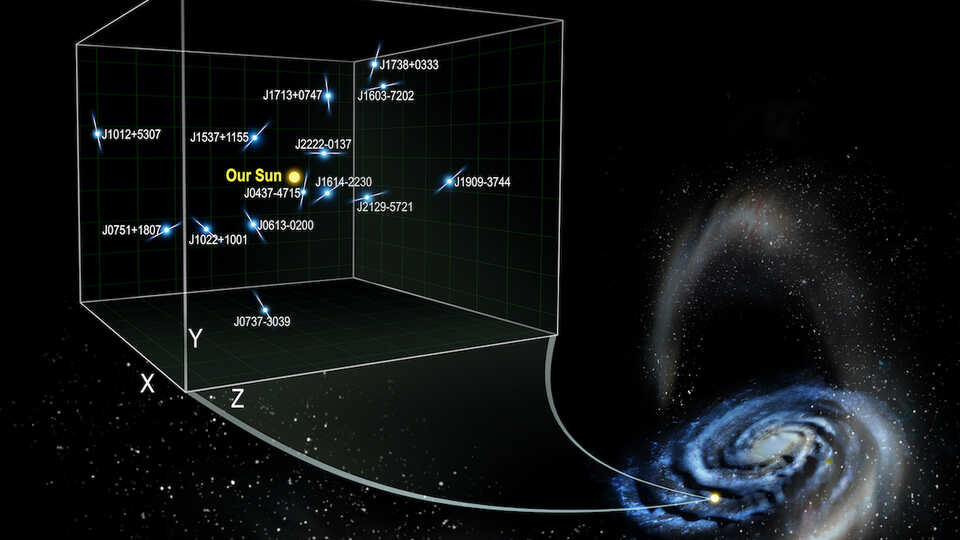 The locations of fourteen millisecond pulsars within a few thousand light years of the Sun, used like cosmic accelerometers to measure the amount of dark matter in the Milky Way. (Courtesy of the Institute of Advanced Study and Dana Berry.)

One of the niftiest bits of technology in your smartphone is the accelerometer. It ensures that your YouTube videos remain oriented correctly when you turn your screen this way and that, and it also does things like count the number of steps you take or stairs you climb during the course of the day.

That technology can be used to do all kinds of science, too!

If you’re getting a bit stir crazy during lockdown, try some of these science with a smartphone ideas from Scientific American. Or check out the MyShake app from the University of California, Berkeley: in addition to giving you up-to-the-minute information on seismic events, it also collects data from your phone’s accelerometer to help measure the magnitude of earthquakes. (After all, that jolt you feel during a temblor is just rapid, short acceleration.) Most laptops have accelerometers, too, and you can install the Quake Catcher software to detect earthquakes.

Pretty nifty, but what does this have to do with astronomy? (You’re reading this on the Academy’s Universe Update page, after all…)

In a press conference Monday at the 237th meeting of the American Astronomical Society, Sukanya Chakrabarti from the Rochester Institute of Technology described using millisecond pulsars like an accelerometer—for the Universe! In fact, her presentation was entitled, “Using Galactic Accelerometers to Directly Measure Dark Matter.”

As that title suggests, Chakrabarti is using the pulsar “accelerometers” to gauge the amount of dark matter in the Milky Way galaxy. Specifically, she is looking at pulsars that are quite close to home—within 3,000 or so light years of the Sun—to see how they are being pulled toward the plane (and to a lesser degree, the center) of the galaxy.

Most surveys of dark matter within our galaxy make the assumption that the galaxy is “in equilibrium,” a high-falootin’ way of saying that stars and gas have more or less settled down into regular, boring orbits around the center of the galaxy. But in fact, the Milky Way galaxy has experienced all kinds of significant events that have prevented things from getting boring! We know that small galaxies have collided with us, causing ripples in the gas and dust (and stellar motions) much like a stone plunked into a pond.

That was actually the topic of Tuesday morning’s plenary talk at the meeting, when Adrian Price-Whelan from the Flatiron Institute described recent advances in understanding the kinematics of our home galaxy. (You can actually download a video of his entire talk if you’re so inclined.)

Over the past several decades, astronomers have completed a number of highly precise, quite thorough surveys of our galaxy, but a precise model of how the galaxy has taken shape eludes them. The Milky Way has evolved through a messy and chaotic process, and Price-Whelan described some of the features we observe today that can help us reconstruct the past—including observations of streamers of stars left over from interactions with smaller galaxies that collided with the Milky Way long ago. Price-Wheelan even has a spiffy interactive visualization of these streamers on his website—you can zip around a 3D model of the galaxy and see streamers in relation to the Milky Way as a whole!

(Another press conference talked about the work that’s gone into characterizing just one of these streamers, in an attempt to understand where its stars originally came from.)

Getting back to Chakrabarti’s work (using millisecond pulsars galactic accelerometers to directly measure dark matter, as you may recall), the basic idea is to measure the gravitational attraction between dark matter and millisecond pulsars close to home. The astronomers do that by measuring changes in the speed of the pulsars—the definition of acceleration, as it turns out!

Why millisecond pulsars? Because these rapidly-spinning remnants of dead stars are essentially incredibly precise clocks. A pulsar is about the size of San Francisco, but it spins on its axis once every thousandth of a second! (Crazy, yes, but that’s astronomy for you. The Universe is a crazy place.) Astronomers have cataloged the rate at which these pulsars spin, and they’re making more and more refined measurements of how the spins change over time, which can take place because the pulsar is actually slowing down—or because it’s moving toward or away from us.

These aren’t huge velocities. As Chakrabarti noted, what her team is measuring is comparable to “the speed of a crawling baby—and not a very fast one!” But the changes in speed help astronomers understand how these specific pulsars are accelerating through space. That acceleration requires a force to cause it—in this case, the force of gravity!

The source of that gravitational attraction is the matter in the Milky Way. Some of that matter is ordinary matter, which we can basically see, and we know how much of that is out there. But some of that matter (the majority of it, oddly enough) is dark matter, and we don’t have a way to detect dark matter—we only see its influence through its gravitational effects. So… Measure the acceleration of the pulsars, calculate the force required to produce said acceleration, subtract out the effect from ordinary “visible” matter, and you’re left with the amount of dark matter in the plane of our galaxy (as well as a sense of how it’s distributed throughout the galaxy). Easy peasy.

Astronomers have estimated the amount (and distribution) of dark matter in the Milky Way before, but what’s great about the “galactic accelerometer” technique is that it’s a direct measurement of the acceleration of the pulsars—making very few assumptions about how our galaxy as a whole is behaving.

If you want to learn more (a lot more), you can check out a video lecture that Chakrabarti recorded back in September.

This isn’t the only application of millisecond pulsars that was described this week. The meeting kicked off with a talk by Paul Demorest from the National Radio Astronomy Observatory (NRAO). His Kavli award lecture (win an award, give a talk, that’s how this conference works) outlined the evolution of the North American Nanohertz Observatory for Gravitational Waves (nicknamed NANOGrav). This decade-plus-long research program has used millisecond pulsars to search for the jiggling of space-time itself from gravitational waves!

You may have heard about the detection of gravitational waves from the Laser Interferometer Gravitational-Wave Observatory (LIGO) a few years ago, an accomplishment that gave astronomers a new window into observational astronomy…

Astronomers haven’t stopped there! They are coming up with ways to look for gravitational waves of different frequencies and smaller amplitudes. That includes building new observatories such as NASA’s Laser Interferometer Space Antenna (LISA), but it also means looking for new ways to observe astronomical objects that can help us study gravitational waves.

NANOGrav uses the same precise clock-like properties of millisecond pulsars to measure how they get nudged around by gravitational waves. It measures changes in the pulsar timing down to hundredths of nanoseconds, according to Joseph Simon of the University of Colorado, Boulder—that’s precision down to one ten millionth of a second!

With all kinds of gravitational waves overlapping and jiggling space-time in different ways, it’s a bit like looking at the surface of a turbulent pond (as opposed to the surface of a pond with distinct ripples created by a stone plopped onto its surface). But the team thinks they’re starting to see potential hints of gravitational waves, as described by Simon at one of the Monday press conferences.

So the next time you fiddle with your smartphone and appreciate its accelerometer-powered functionality, just give a quick thought to the same thing happening at a scale 100,000,000,000,000,000,000 bigger—helping us understand how dark matter and gravitational waves permeate our Universe! 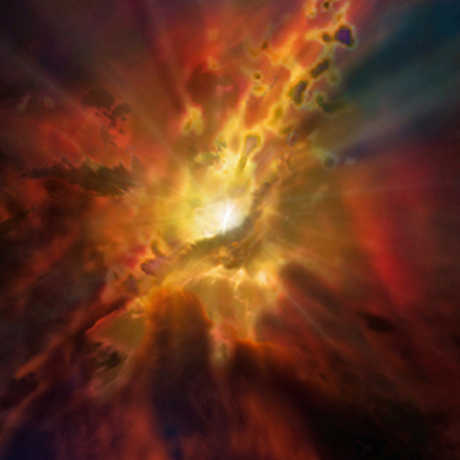 This week: Was Planet Nine stolen from another system, a student discovers exoplanets, black holes and cold gas. 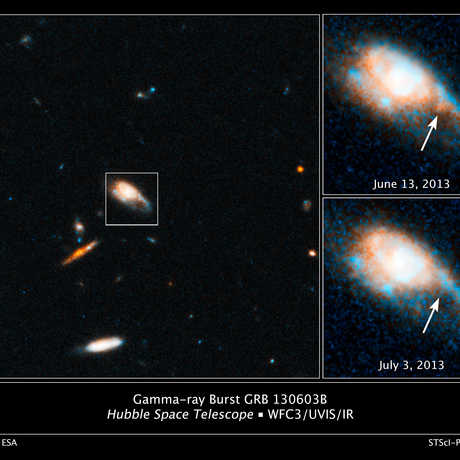 Confirmed Source of GRBs?
The same short-duration gamma-ray burst seen on June 3rd that produced a few moons’ worth of gold was still visible nine days later when the Hubble Space Telescope observed its remains.
image-standard 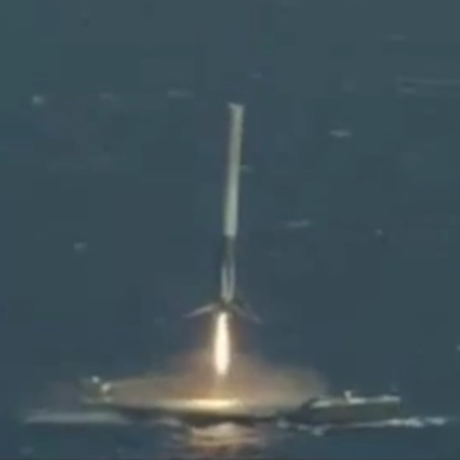 This week's headlines come from throughout the Universe!

Your hub for astronomy news, sky-watching tips, and more from the Morrison Planetarium team.