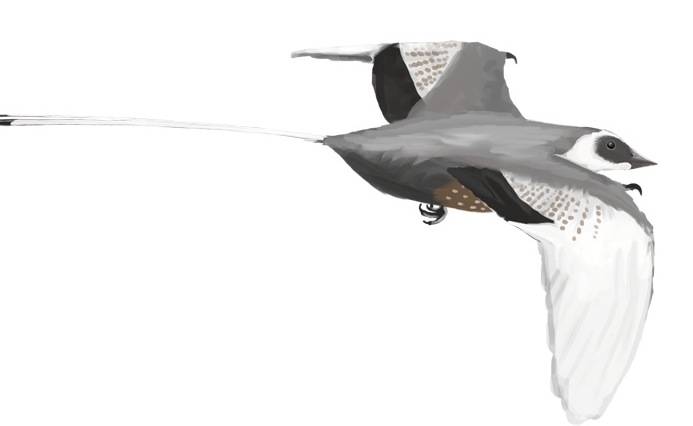 The vast array of colors found among birds today is dazzling. From the vivid blue and black of the blue bird-of-paradise to rich brown and stark white of the bald eagle, it’s easy to see a brilliant and diverse range of colors from bird species worldwide. But what about those birds whose feathers we can’t see, birds who have long since gone extinct? While most fossilized bird remains have long since lost their feathers, scientists have now found a way to re-imagine them. Their results are reported in the June 30 issue of Science Express.

Scientists have long since tried to interpret the coloring of prehistoric birds feathers. Experts have previously focused on melanosomes, tiny organelles in cells that make and store melanin pigments. In the past, scientists examined fossilized melanosomes, making an educated guess about the kind of melanin pigment, and thus feather color, the bird had. Perhaps unsurprisingly, results have been underwhelming.

So scientists at the Department of Energy’s SLAC National Accelerator Laboratory in Menlo Park, California, approached the question from a different angle. Rather than trying to guess the type of melanin pigment from fossilized melanosomes, they identified and extracted chemical traces of a specific dark pigment called eumelanin from fossilized remains.

According to Roy Wogelius, a geochemist from the University of Manchester and one of the paper’s co-authors, “This is a pigment that evolved a very, very long time ago but is still actively synthesized by organisms on the planets. We found a way to map it and show its presence over 120 million years of geological time.”

The team extracted the eumelanin pigment from two fossilized birds, Confuciusornis sanctus and Gansus yumenesis. These birds lived about 120 and 100 million years ago, respectively, and are important branches on the avian evolutionary tree.

Using two sophisticated X-ray techniques developed at the SLAC National Accelerator Laboratory, the team identified specific chemicals embedded across the entire fossilized sample. This technique has the benefit of allowing researchers to ‘see’ variations in pigment levels across an entire specimen. The most common chemical element they found in the remains? Copper.

The presence of copper alone couldn’t tell the researchers much about feather coloring. They had to find out what form the chemical took. By analyzing another specimen – a fossilized feather from Gansus yumenesis, the team found the same form of copper. The copper in the fossils was the same as the copper in the feather. And as co-author Sam Webb explained further, “When we looked outside the feather we didn’t see the copper at all.” The authors concluded that the presence and amount of this form of copper is a key indicator of feather coloring in birds. Based on preliminary analyses of the copper, the authors concluded that Confuciusornis sanctus had mostly dark feathers along the torso, with lighter or white feathers more prominent towards the wings.

The techniques employed by this research team bring new life to the study of prehistoric organisms. No longer are researchers limited by direct visual analysis of the fossil remains. There’s a whole new chemical method of discovery that may give researchers a much clearer window into prehistory.

As Phil Manning, a paleontologist at the University of Manchester and one of the paper’s co-authors, explained, “In doing this, we unlock much more than just paleontological information. We now have a chemical roadmap to track similar pigments in all life.”