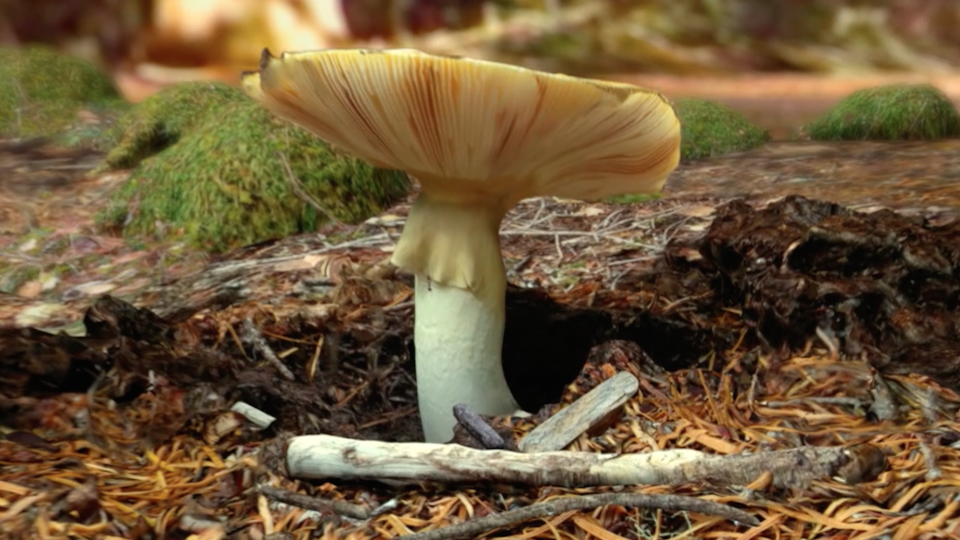 Jeroen Lapré has been diving into soil for the past 18 months. Not literally, of course, but virtually, for the new Morrison Planetarium show Habitat Earth. Lapré created the topsoil sequence, starting from a mushroom in the forest and heading underground as ants tunnel under the mushroom, then following the hyphae of the mushroom through a tiny subset of the soil biology, all the way to the base of a tree. The trip through the topsoil sets the stage for critical parts of the hydrological cycle: water flowing through tree roots, vaporizing out of leaves, and forming storm clouds.

Lapré is the senior technical director with the Visualization Studio at the Academy, and Habitat Earth is his fourth production here. He created the Academy’s living roof for Fragile Planet, depicted photosynthesis in Life: A Cosmic Story, and reconstructed a street-level view of the 1906 San Francisco temblor for Earthquake: Evidence of a Restless Planet. Talk about a diverse tenure! But Habitat Earth took Lapré’s passions to the extreme. “This was the most biology I’ve ever worked on in one show,” he says.

Lapré explains that, “When I began researching the soil biology, I quickly realized how complex it is, so we had to narrow it down to small subset that would fit into show.” That subset included ants, moss mites, nematodes, amoebae, bacteria—and mycorrhizal fungi entwined with tree roots. (That’s only a subset?)

Lapré had to create all of that, with the challenge of making the scene scientifically accurate. And there were the hyphae—hundreds of thousands of tiny fungal filaments woven throughout the entire scene. “The hyphae did drive me crazy, due to their fractal nature, from the centimeter scale right down to the micron scale.”

But Lapré did his homework. In addition to diving into his own research, he worked with the production’s scientific advisors Tom Bruns, from UC Berkeley, and Dennis Desjardin, from San Francisco State University. (Desjardin’s work is also featured this week in a Science Today video.) Lapré even took a scientific paper on how hyphae branch and used the researchers’ methods to write custom Python (a type programming language) code in the software Houdini. Houdini is a procedural 3D animation and special effects software used by the entire production crew here at the Academy—and by many animators in Hollywood. “I used the procedural capability of Houdini to grow the 3D geometry of the hyphae, which had to be scientifically accurate and would have been impossible to do by hand.”

Lapré also had some fun with the nematodes. (Who says worms aren’t fun!) The shape of the worms came from a cool Caltech project, the Virtual Worm Project. (Click on the link or head here to find out more about it.) But the movement of the worm was a true Academy collaboration. Academy landscaper Kendra Hauser collected some soil from the gardens around the building, and Vic Smith, in the Entomology department, took the sample and placed it under a microscope, capturing video of the movement of a worm. Then to make sure it was a nematode, Lapré asked Academy microbiologist Shannon Bennett look at the video to confirm. Her determination: a nematode! The video became the model of movement for the worms in the scene.

Worms may seem an unlikely creation for Lapré, a lifelong fan of science and science fiction, who knew he wanted to become a filmmaker after seeing the original Star Wars movie at the age of 12. He worked at Industrial Light and Magic (ILM) for 11 years before joining the Academy in 2008. Part of his work at ILM included working on the first three Star Wars episodes, a dream come true. When he heard of the Academy’s first fulldome production, Fragile Planet, which covered both the environment and astronomy, “I knew then and there I had to switch jobs. One of the many things I find gratifying about working at Academy is applying what I’ve learned from the visual effects industry to science-based storytelling.”

And very soon, Lapré gets to head back into space—for the next Academy production that will give viewers a new perspective on our solar system. “I’m excited about the new show. I’m looking forward to visualizing the Rosetta mission, to seeing the new data from the New Horizons mission, and also visualizing the Russian meteor impact.” It’s too early to tell which will be on his to do list at this point. “Each production here is definitely a team effort,” he says. “Every individual in the team is multifaceted and crucial to the production.”

(In his personal time, Lapré takes his family to citizen science events, and is working on his own indie sci-fi project.) 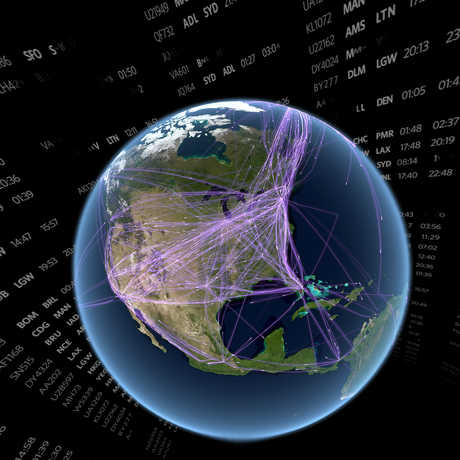 How do you make real data visually stunning? 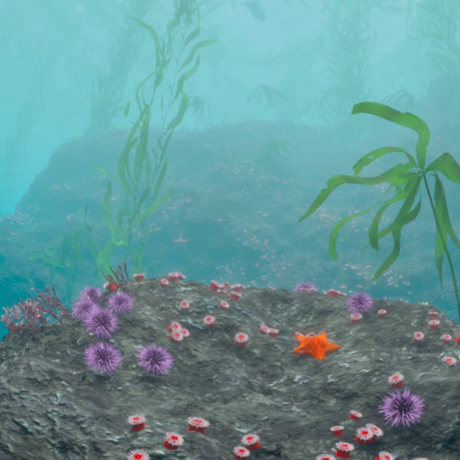 See how our animators created a CG kelp scene that looks like the real thing. 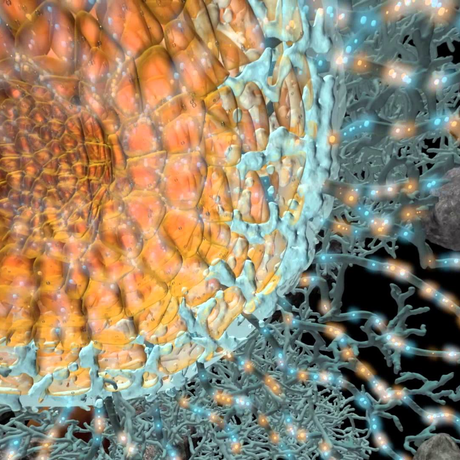 What lies beneath a mushroom and how do fungi help an ecosystem? 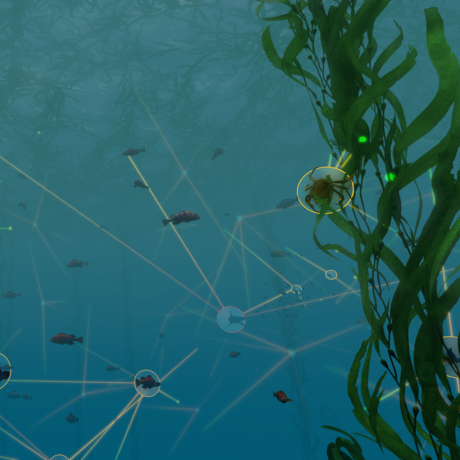 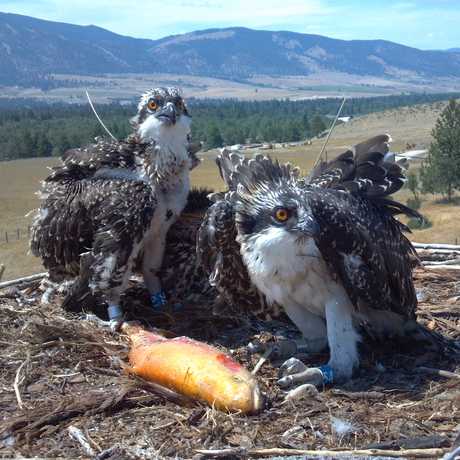 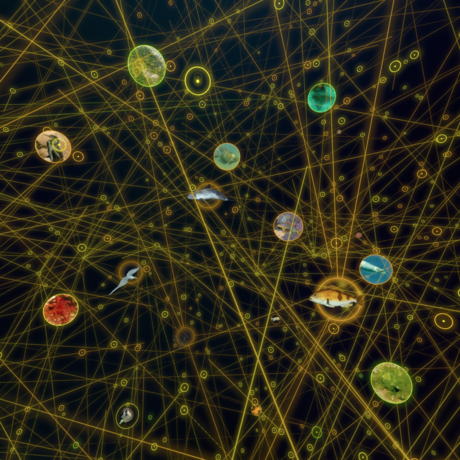 Food Webs in Habitat Earth
Our team of animators took on the challenge of visualizing food webs in San Francisco Bay and other ecosystems.