Coral reefs are invaluable marine ecosystems. They provide habitat for thousands of species, which, in turn, serve as integral links in the ocean’s food chain as well as the basis for many fishing and tourist economies. With global warming, ocean acidification, sedimentation, and destructive fishing practices threatening 75 percent of the world’s reefs, Academy scientists are intensifying their efforts to understand, protect, and restore these vital natural resources before it's too late.

A key component of this work is a partnership with SECORE, a nonprofit organization developing new technologies and techniques in coral reproduction. Working closely with SECORE, government agencies, and local conservation groups, the Academy aims to overcome the limitations imposed by the heavy labor currently required for coral restoration, and to eventually scale the application of these new techniques to help rehabilitate reefs around the globe.

Until recently, coral reef restoration has mostly relied on asexual propagation, or cloning, via small fragments removed from larger, mature colonies. Once a new colony has grown large enough under carefully monitored conditions, it is then "planted" in a damaged reef site to aid natural recovery. This method is extremely labor-intensive and not always effective, given that conditions in nature are often different than the controlled conditions in which a fragment was grown. In addition, reproducing corals through cloning does nothing to contribute to the genetic diversity of a reef, which is important for its long-term ecosystem health.

SECORE has developed a method that harnesses the potential of the corals' own sexual reproductive strategies. So far, the organization has focused its efforts primarily on Caribbean elkhorn and staghorn corals, hermaphroditic broadcast spawners with highly predictable reproductive habits. These corals generally release their eggs and sperm once a year, aligning with specific environmental cues, such as water temperature, moon cycle, and time of sunset. Often, these events can be predicted within a window spanning a few hours. “A spawning event is like snowfall in reverse,” says Bart Shepherd, Director of Steinhart Aquarium. “The sperm and egg bundles are buoyant and float upwards. Fertilization and development take place right on the surface of the water.”

Biologists use special nets to collect the bundles and then fertilize the eggs in the lab, culture the larvae, and allow the new polyps to attach to special tiles that can be planted directly into wild reefs. The fertilization success rate of these collected samples is nearly 100 percent. Specific colonies can even be cross-fertilized, which may enhance desirable traits, including a resilience to the effects of warming oceans due to climate change.

In 2011, Shepherd and fellow Academy biologist Charles Delbeek attended one of SECORE’s workshops in Curaçao for a crash course in its coral reproduction methods. Since then, the Academy has pledged to aid the foundation’s goals and help them expand globally, and Shepherd now serves on SECORE’s board of directors. In April 2015, Shepherd and several Academy aquarium biologists joined SECORE members on a trip to the Philippines’ Coral Triangle, a place of incredible biodiversity where the Academy has conducted research and educational outreach since the early 1990s. There, SECORE partnered with local organizations to talk about the importance of coral reef conservation within the diving community and encouraged the use of iNaturalist to record coral spawning activity. They also brought together scientists, students, and local officials and authorities for hands-on training in coral reproduction and restoration.

This work supports the Aquarium’s goal of developing impactful research and field-based conservation partnerships and programs. While stressing the importance of the Academy’s in-house propagation program, Shepherd says, “We want to do more than discuss the plight of these animals in the wild. We want to help improve the conditions for species in the natural world.” Doing so, he hopes, will help the Academy further its mission to sustain important reef ecosystems for generations to come.

The Academy is working to protect endangered creatures and habitats, and helping to shape a sustainable future.
Read more Sustainability Success Stories.

The Academy is working to protect endangered creatures and habitats, and helping to shape a sustainable future. 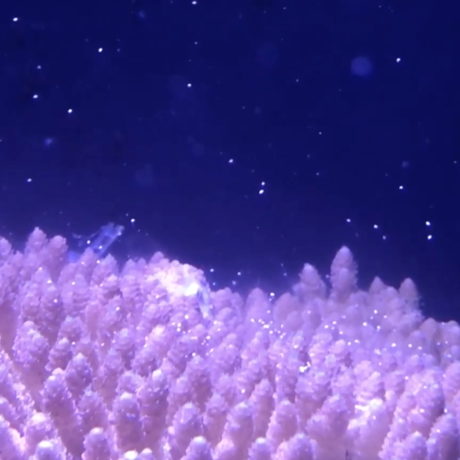 https://youtu.be/01wa5P_uxO0
Watch a video of coral spawning in our lab!
Bird