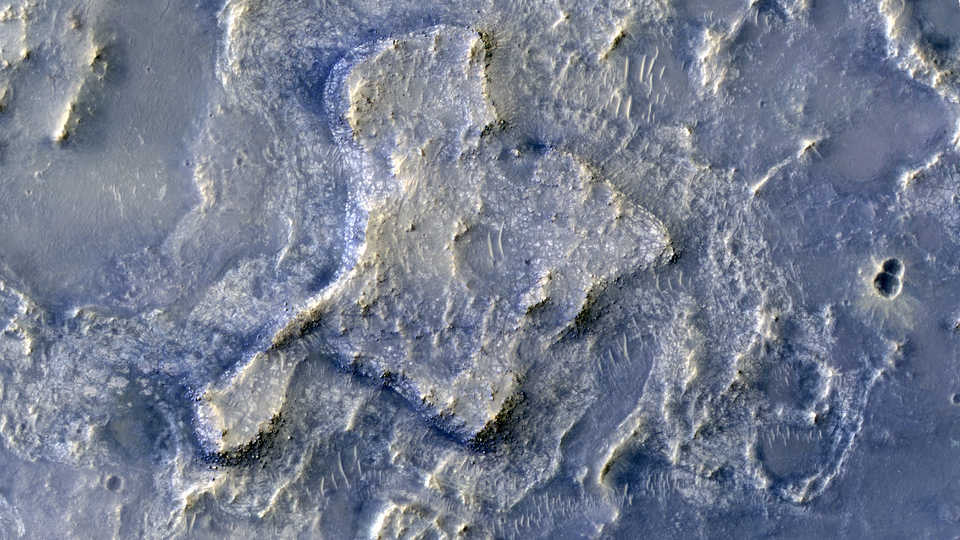 It’s hard enough choosing a new place to eat out. How can you possibly choose where to land NASA’s next Mars rover? Researchers at Brown University offer the Northeastern Syrtis Major region on Mars as a prime candidate. The region features a tantalizing array of mineral deposits in environments that were potentially once-habitable across different eras of martian history.

When the 2020 rover reaches Mars, it will seek out signs of past life and (if such life existed) and try to find evidence for what happened to it. Practically speaking, scientists hope to dig up evidence from the life-likeliest eras, from the nearest and most habitable regions That’s where the Northeastern Syrtis Major region comes in.

Two hundred and fifty million years after the impact crater formed, the lava from the Syrtis Major volcano flowed over the martian surface. Between these two bookend layers are several distinct mineral “chapters.”

The researchers in John Mustard’s lab at Brown identified four other mineral signatures. Each of these is characteristic of different watery environments that might have been habitable—for instance, clay minerals are hard to come about in the absence of water. One of the oldest deposits in this region features clay minerals (smectite) which form from an interaction with water of neutral pH. Above it, there is evidence of kaolinite (another clay mineral, formed when water seeps through soil). Pockets where olivine altered to carbonate are layered on top. And finally, sulfate bearing rock lies under the younger volcanic crust. It’s a great range of aqueous environmental evidence to investigate. Unfortunately, the rover would not be able to dig through all these layers. But maybe it does not have to.

The new map of the region shows where each of these mineral signatures have been exposed by erosion over time. “Within a few kilometers, there’s a huge spectrum of things you can see,” says lead researcher Mike Bramble, “No location offers better access of the gamut of geological processes active at Mars than Northeast Syrtis Major.”

The scientists argue that a mission to this area would be like driving through different martian eras. It could offer insight to the potential for life during Mars’s transition from the bombardments of the Noachian period into the Hesperian period, towards the dehydrated and currently (as far as we know) lifeless Mars we know today.

Bramble is not the first to suggest the Northeast Syrtis region. The region is already on NASA’s shortlist as a potential landing site for the Mars 2020 rover. The clock is ticking for the rover’s launch in a few years! Detailed maps such as Brown’s Syrtis Major project play an important role in making the best decision. A rover trip to the Red Planet is a big deal, so NASA needs to choose wisely.