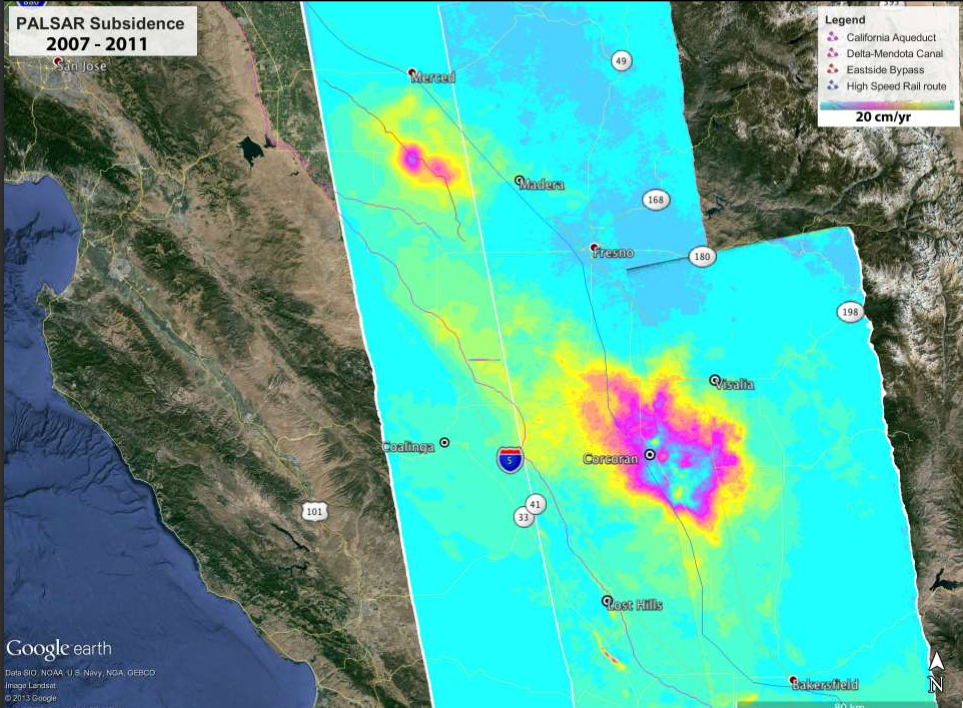 On the eve of the potential, and much-needed, rainstorm, scientists from NASA joined the California Department of Water Resources (DWR) in a press conference Tuesday to discuss how NASA can help with California’s drought.

NASA has a fleet of satellites pointed toward Earth, studying processes here, much like they would a moon or other planet. The conference outlined how current and future spacecraft will aid in understating the challenges we face during this drought.

Fallow Land
Faced with an inability to fully irrigate their crops due to drought, Central Valley farmers now must prioritize use of limited available water supplies. New methods using time-series of crop data from NASA and USGS satellites can provide information on land fallowing and reductions in planted acreage early in the year. The team is preparing to produce data and maps of fallowed acreage in the Central Valley beginning this April to help monitor the impacts of the ongoing drought.

Groundwater
Groundwater is increasingly important in water resource management, yet knowledge of groundwater levels is often unknown. Satellite-based and airborne interferometric synthetic aperture radar can monitor groundwater levels by measuring surface deformation due to the withdrawal and recharge of aquifers.

Researchers hope to extend the data to the present day to give state water managers updates on how subsidence (or the sinking of land due to groundwater extraction) has progressed during the drought and detect possible new areas of concern. The data can be used to focus on problem areas from which we have pumped too much water.

Atmospheric Rivers
NASA is conducting satellite studies and analyses of weather and climate models to enhance understanding and improve forecasts of atmospheric rivers. These narrow, low-altitude, elongated corridors of water vapor account for most major flooding events, provide about 40 percent of California's freshwater, and often are “drought busters.” They help scientists understand and predict the global water cycle and its regional extremes.

Snowpack
As we mentioned in an article in December, NASA and DWR are measuring the snowpack in the Sierras to determine water availability. In April, they will resume flights of NASA’s Airborne Snow Observatory to map the snowpack of the Tuolumne River Basin in the Sierra Nevada and the Uncompahgre watershed in the Upper Colorado River Basin. The Tuolumne watershed is the primary water supply for 2.6 million San Francisco Bay Area residents.

The Global Precipitation Measurement (GPM) Core Observatory, a joint satellite project with the Japan Aerospace Exploration Agency (JAXA), is scheduled for launch later this week, and will produce the first nearly global observations of rainfall and snowfall. The new information will help answer questions about our planet's life-sustaining water cycle, and improve water resource management and weather forecasting.

“We value the partnership with NASA and the ability of their remote sensing resources to integrate data over large spatial scales, which is useful for assessing drought impacts," says Jeanine Jones, of DWR.