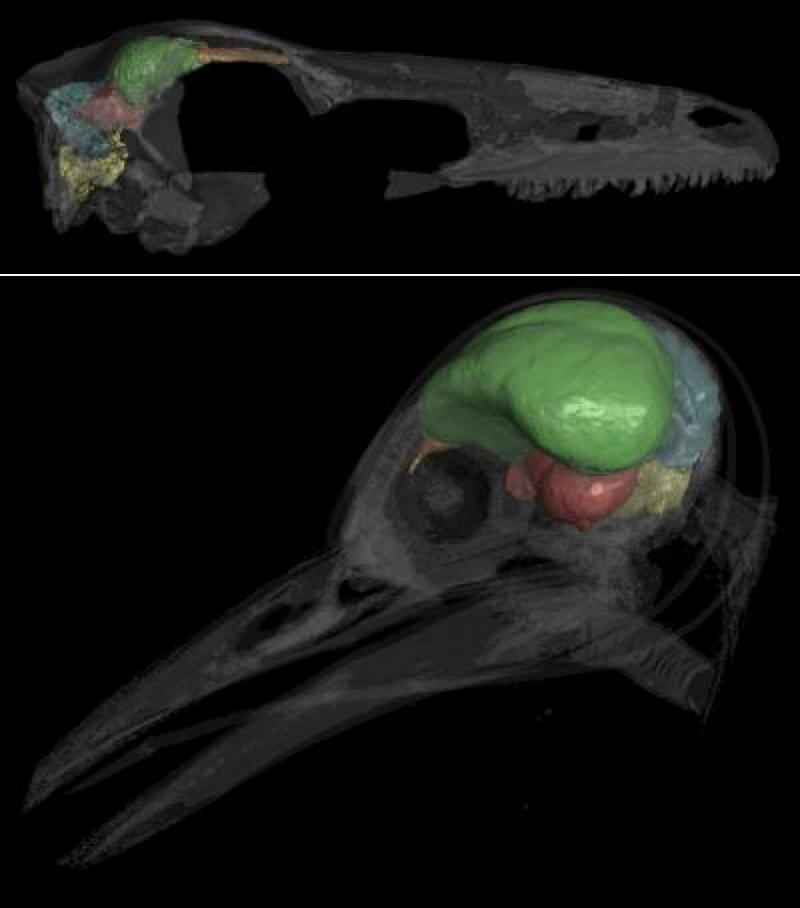 For over a century, the 150 million-year-old Archaeopteryx has been poked and prodded to determine its place in the evolution of birds. With all of this examination, scientists have placed Archaeopteryx right between theropod dinosaurs and their modern day relatives—birds—on the tree of life. This transitional fossil has a number of features that put it between the two: its wishbone, flight feathers, wings, and partially-reversed first toe put it in the avian category, while its ankle bone, interdental plates, and long tail chevrons indicate its relationship to dinosaurs.

Now this raven-sized early bird has had its brain examined. Amy Balanoff and her colleagues from the American Museum of Natural History recently took CT scans of more than two dozen specimens, including modern birds, Archaeopteryx, and closely related non-avian dinosaurs such as tyrannosaurs, to size up the different species’ brain power.

“Bird-brained” is actually a misnomer. (Crows demonstrate this again and again.) Modern birds are distinguished from reptiles by their brains, which are enlarged compared to body size. This “hyperinflation,” most obvious in the forebrain, is important for providing the superior vision and coordination required to fly.

By stitching together the CT scans, the scientists created 3D reconstructions of the skulls’ interiors. In addition to calculating the total volume of each digital brain cast, the research team also determined the size of each brain’s major anatomical regions, including the olfactory bulbs, cerebrum, optic lobes, cerebellum, and brain stem.

“If Archaeopteryx had a flight-ready brain, which is almost certainly the case given its morphology, then so did at least some other non-avian dinosaurs,” Balanoff says.

“Archaeopteryx has always been set up as a uniquely transitional species between feathered dinosaurs and modern birds, a halfway point,” she says. “But by studying the cranial volume of closely related dinosaurs, we learned that Archaeopteryx might not have been so special.”

If not unique, where should we place Archaeopteryx in the tree of life? More research is needed. The current study is published this week in Nature.