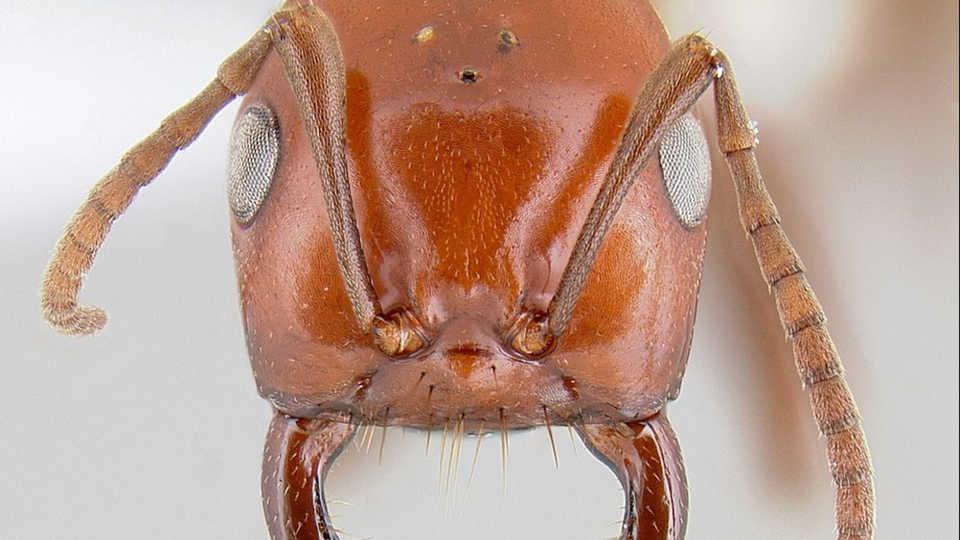 From a human perspective, the social structure of ants seems quite alien, but on close inspection, their activities can appear all too familiar. Ants’ nests involve a complex division of roles, with members of the colony working together toward species domination and survival, which sounds a bit like human society. And some manipulative species exploit the rules: parasitic ants.

One of species of parasitic ants, Polyergus breviceps, is especially wicked. This obligate parasite takes over a colony of Formica ants and enslaves its workers. The Polyergus queen infiltrates the nest, killing the host queen and taking her place. The Formica ants then rear the Polyergus offspring, maintain the nest, and forage for the entire colony.

But the Polyergus don’t stop there. To replenish their supply of Formica slave ants, the parasites regularly raid neighboring Formica colonies, kidnapping the pupae and bringing them back to the original colony.

There’s another exceptional thing about ants: the chemical cues they use to navigate their world are their keys to finding food, following their kin, and distinguishing enemies. Ants recognize friend from foe using cuticular hydrocarbons (CHCs). These species-specific chemicals “are waxy, exoskeletal compounds that originally evolved for desiccation and microbial resistance,” according to a study published today in PLoS ONE. “Although CHCs have a strong genetic component to them,” the paper continues, “the complete chemical profile possessed by an individual ant may be modified to include CHCs acquired from colony mates through social interactions including grooming and food exchange, or environmental influences.”

UC Berkeley scientists Candice Torres and Neil Tsutsui, authors of the new PLoS publication, wondered how parasitism would affect these chemical cues for the Formica ants, and compared enslaved ants to free ants to find out. Not surprisingly, the enslaved ants are exposed to a larger diversity of chemical cues that come from their own species and the slave-makers, the Polyergus ants. The Formica slaves also expand their tolerance of different CHCs because their nestmates come from several different colonies of the same Formica species. This new chemical cue tolerance—and not the oppression of their masters—makes the enslaved ants less aggressive than the free ants, the team discovered.

“When free-living Formica ants are kidnapped into the Polyergus colony, they enter a society that is comprised of kidnapped ants from many other Formica colonies. Here, we show that this rich social environment alters the behaviors displayed by the enslaved ants,” says Tsutsui.

At any opportunity, Academy ant expert Brian Fisher proclaims the wonders of the astounding ant societies beneath our feet. We interviewed him recently for this video, and he said: “I urge each of you, if you do have an ant in your kitchen or in your bathroom, to stop, wait a moment, and watch it. It's a real ant, doing real biology. You don't have to go on a safari to Africa. The ants are coming to you. Just take the time to study them, watch them, and learn their ways.”