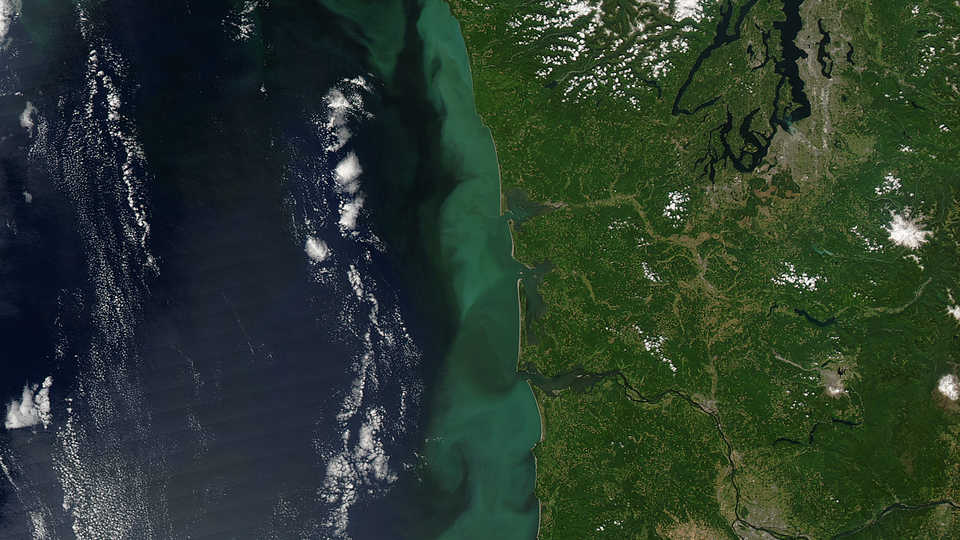 On January 16, the Morrison Planetarium opens a new original show, Habitat Earth. A production of the Academy’s Visualization Studio, the show explores food webs and energy flows in ecosystems, as well as human-induced sustainability challenges that threaten our planet. It also provides examples of how humans can help restore and support the resilience of natural systems.

One scene in the show features the important roles of ocean producers, phytoplankton, or marine microalgae, that use energy from the sun and nutrients in the water to form the base of the ocean food web, feeding most of the marine life in the sea. The show’s visualizations of the blooms of these life forms, the whales that follow them, and phytoplanktons’ role in the greater marine food web are stunning, and as everything else produced here, based on real data. Some of the phytoplankton data comes from NASA MODIS satellite imagery, other data from G. Jason Smith of Moss Landing Marine Laboratory.

Smith studies how marine phytoplankton survive and flourish in a body of water—specifically the Monterey Bay, but he and colleagues study patterns all up and down the coast of California. Smith describes algae as “the grasses of the seas,” taking up nutrients such as carbon and nitrogen to become biomass, an abundant source of food for other small creatures—such as krill, copepods, and other zooplankton—that will then become food for larger and larger fish, marine mammals and more.

“But, as with anything,” Smith says, “too much of a good thing can be bad. Too much production without grazing and consumption can lead to anoxic or hypoxic conditions.” Algal blooms are based on sunlight and the flow of nutrients. They can happen with natural seasonal changes, and with natural processes such as winds that induce currents, which in turn bring up nutrients from deep in the ocean (what we call upwelling). But algal blooms can also be affected by human inputs—nutrients from wastewater and agricultural run-off into the sea.

Blooms aren’t bad until, as Smith describes, there’s more phytoplankton in the water than the zooplankton can consume. The phytoplankton eventually regulate themselves, Smith says, when they block out the sunlight they need to survive. When the algae die, they become biomass for bacteria, which can lower the oxygen levels in an area of the ocean (or lake, as we witnessed in the Great Lakes this past summer), making it uninhabitable for other marine life.

Other bad blooms occur when certain species of the dinoflagellates and diatoms that make up these phytoplankton increase in numbers. When dinoflagellate species of algae are present in large numbers, it’s known as a red tide, due their discoloration of surface water. Some phytoplankton species produce “potent neurotoxins,” as Smith describes them, that can harm consumers (even humans) when the toxins contaminate shellfish. Blooms of these phytoplankton are termed “harmful algal blooms” (HABs). Smith and his team at Moss Landing study the toxic diatom genus Pseudo-nitzschia. They are trying to understand how one of the toxins produced by this organism, domoic acid, is made—and why, evolutionarily, would these algae need to be toxic?

Smith and his colleagues work to monitor the coast for a range of toxic phytoplankton, informing seafood suppliers when levels are high. The team is also trying to determine how humans might influence these HABs. You can follow their studies here (Monterey Bay) and here (Coastal California).

But the new production, Habitat Earth, focuses largely on the good these phytoplankton do. The show demonstrates the important role they play in the marine food web, and Smith helped the production team here identify species and images for the show. Come and see these remarkable creatures for yourself! For more information, visit the Academy’s website.