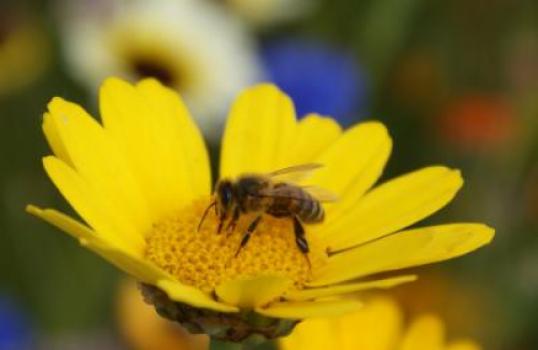 Air pollution affects not only human health, but the health of other organisms, too. Take diesel fuel exhaust, known to cause cancer, heart and lung disease, and mental illness in humans. Responding to such health threats, most nations have regulated removing sulfur from fuel in an effort to make these emissions less toxic.

But new research from the University of Southampton shows that even the cleaner fuel exhaust can harm a very important insect—the honeybee.

As if honeybees weren’t already under siege, Colony collapse disorder (CCD) kills an alarming number of bees each year and, in a study from earlier this year, was linked to some pesticides.

The current study looked at specific chemicals in diesel fuel exhaust—nitric oxide and nitrogen dioxide, or NOx gases. Researchers mixed NOx gases with the chemicals in the odor of oil rapeseed flowers and discovered that eight of the floral chemicals altered and two were completely lost.

The scientists trained bees in a lab to recognize the floral scent of the rapeseed flowers. However, when those same two chemicals were removed, the bees could not recognize the scent.

This could pose a big problem for honeybees, since they use floral odors to help locate, identify, and recognize the flowers from which they forage. And we humans depend on this foraging to pollinate a variety of agricultural crops—a critical job worth billions of dollars each year.

The researchers say that these chemical changes may affect honeybees’ foraging efficiency, and could ultimately affect pollination and global food security. “Honeybees use the whole range of chemicals found in a floral blend to discriminate between different blends,” says study co-author Guy Poppy. “And the results suggest that some chemicals in a blend may be more important than others.”

“NOx gases represent some of the most reactive gases produced from diesel combustion,” adds another co-author, Tracey Newman. “But the emissions limits for nitrogen dioxide are regularly exceeded, especially in urban areas. Our results suggest that diesel exhaust pollution alters the components of a synthetic floral odor blend, which affects the honeybee’s recognition of the odor. This could have serious detrimental effects on the number of honeybee colonies and pollination activity.”

The finding was published last week in Nature Scientific Reports.