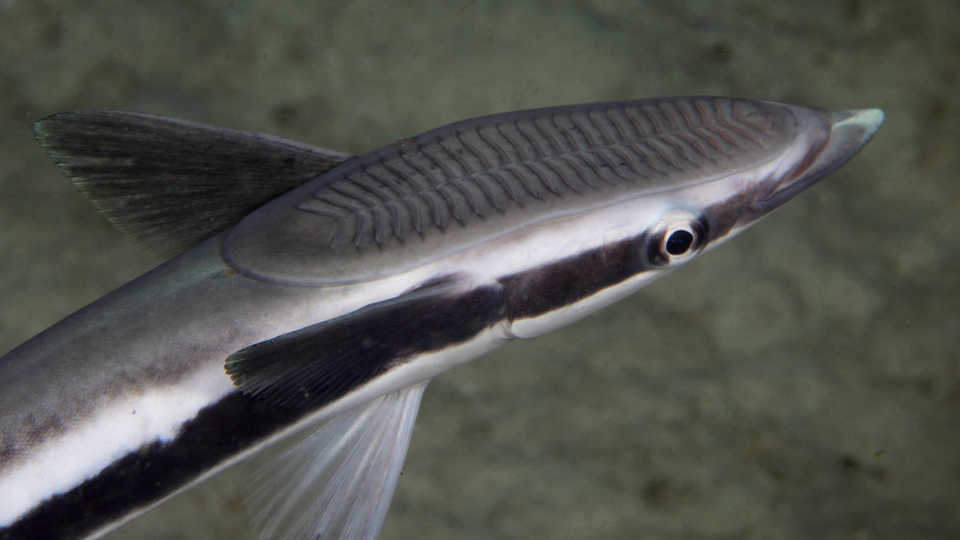 ­­ In observance of Shark Week, we are rerunning some of our favorite articles on sharks and their conservation.

Remoras could be considered freeloaders. Even though they are fine swimmers on their own, they evolved sucker discs on the top of their heads used to attach themselves to their hosts and hitch a ride on sharks or other large marine animals (rays, whales, turtles). They also eat their hosts’ leftovers, or possibly their feces, and enjoy protection from predators by living on a large animal.

Because remoras cause no damage to their shark host, they are not considered parasitic—but the relationship isn’t symbiotic either, since the sharks don’t get much back from remoras, unless of course sharks find amusement in the fishes’ odd, upside-down, disc-shaped heads. Remarkably, the remoras’ suckers evolved over time from their dorsal fins.

“The remora sucker is a truly amazing anatomical specialization but, strange as it may seem, it evolved from a spiny fin,” Oxford University’s Matt Friedman says. “In this fossil the fin is clearly modified as a disc but is found on the back of the fish. It enables us to say that first fin spines on the back broadened to form wide segments of a suction disc. After the disc evolved, it migrated to the skull, and it was there that individual segments became divided in two, the number of segments increased, and a row of spines were developed on the back of individual segments.”

Tapeworms. Not the most appetizing of subjects, so imagine having one named for you! Dave Ebert, research associate at the Academy and director of the Pacific Shark Research Center, recently received that honor. His colleagues have bestowed the name Trilocularia eberti to a new species of cestode (tapeworm), described in a recent article. T. eberti is a shark parasite, part of specialized group of cestodes that appears to parasitize members of the shark genus Squalus, commonly known as spiny or spur dogfish, residing in the intestinal valve of the shark. Ebert is currently working on a description of said shark. Discovered in South Africa. T. eberti is pretty special, as it’s only the second member of its genus to be named.

At Science Today we love parasites! So when we heard about Anelasma squalicola, a parasitic barnacle that not only attaches itself to lantern sharks, but sucks out nutrients from the shark’s flesh, impairing the shark’s reproductive organs, we had to find out more. Luckily for us (and you), we have a brilliant barnacle expert here at the Academy, senior research fellow Bob van Syoc.

What makes Anelasma different from other barnacles? “It has similarities in general body shape to the pedunculate, or stalked, barnacles. However, the stalk has evolved various modifications that serve to function as a feeding appendage rather than simply a site of attachment,” van Syoc explains. “The stalk of Anelasma is embedded in the host shark and absorbs nutrients from the host tissues.”

“In addition, Anelasma squalicola is found only as a parasite of relatively rare deep-water sharks,” van Syoc continues. “This indicates that Anelasma squalicola is a relict species, perhaps a sort of living fossil if you will. They are common and abundant in all of the seas of the world, from tropics to poles, deep-sea to intertidal, estuaries to coral reefs. Their fossil record, thanks to a calcareous shell, is easily traced.”