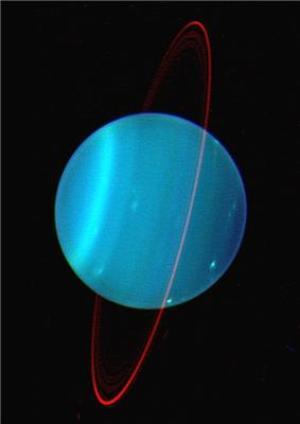 Uranus’ odd axis—it’s tilted a whopping 98 degrees!—has long mystified scientists. The planet virtually spins on its side, likely due to a large impact, or so the theory goes…

… Or went, anyway, until last week. An international team of scientists led by Alessandro Morbidelli, presenting at a planetary sciences meeting in France, knocked the large impact theory on its side.

There has always been a significant flaw in the notion of a body a few times more massive than Earth colliding with Uranus. The bright blue planet’s 27 known moons should have continued to orbit the planet at their original angles, but they too lie at almost exactly 98 degrees.

Using computer simulations, Morbidelli and his team examined the large impact theory. The researchers soon discovered that the collision must have happened early in Uranus’ history. The scientists found that if Uranus had been hit when still surrounded by a protoplanetary disk—the material from which the moons would form—then the disk would have reformed into a fat doughnut shape around the new, highly-tilted equatorial plane. Collisions within the disk would have flattened the doughnut, which would then go on to form the moons in their current positions.

When Uranus was hit, this disk was disrupted but then reformed around the planet's tilted equator, eventually giving rise to the moons in the positions we see today.

However, the simulation also threw up an unexpected result: in the above scenario, the moons displayed retrograde motion—meaning they orbited in the opposite direction to that which we observe. Morbidelli's group tweaked their parameters in order to explain this.

The surprising discovery was that Uranus was not tilted in one go, as is commonly thought, but rather that two or more smaller collisions transformed the system, tilting the planet and giving the moons the orbits we observe today.

This research is at odds with current theories of how all planets form—not just Uranus, says Morbidelli.

The standard planet formation theory assumes that Uranus, Neptune and the cores of Jupiter and Saturn formed by accreting only small objects in the protoplanetary disk. They should have suffered no giant collisions. The fact that Uranus was hit at least twice suggests that significant impacts were typical in the formation of giant planets. So, the standard theory has to be revised.