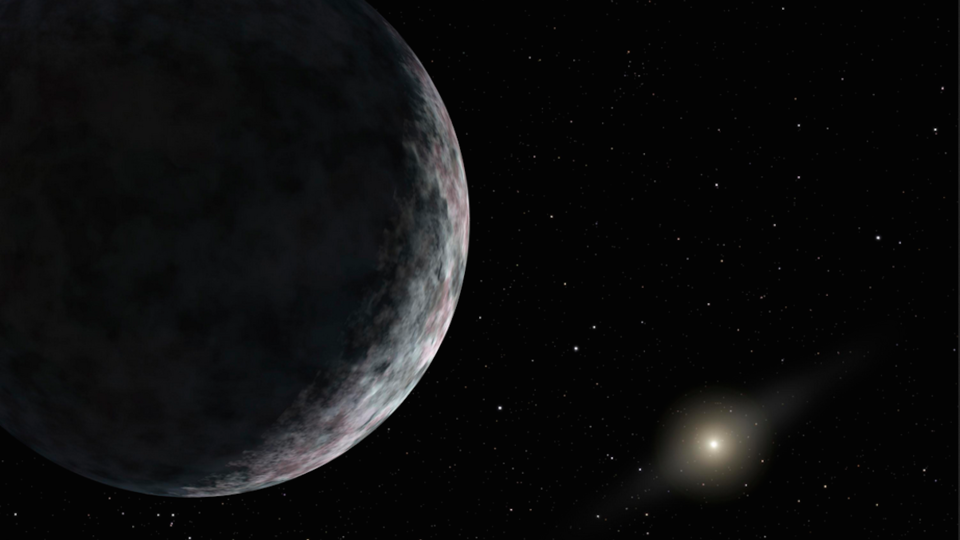 A paper published last week in Nature may explain why we see a surprisingly low number of darker asteroids close to the Sun—they break apart before they get there!

Not all asteroids reside within the main asteroid belt. There are tens (potentially hundreds) of thousands of Near Earth Objects (NEOs)—asteroids whose trajectories have been slowly nudged closer to Earth through uneven surface heating from the Sun as well as gravitational interactions with Jupiter and Saturn. It was thought that most NEOs met their demise as their eccentric orbits eventually ended with a death-plunge into the Sun. If so, astronomers would expect to find a good number of asteroids close to the Sun, approaching ever nearer with each orbit, as well as a similar ratio of low- and high-albedo objects (ones made of darker and brighter material, respectively), since asteroids in the belt tend to be mixed. This slow plunge would also mean a long opportunity for fragments of the asteroids to be blown off by the Sun, resulting in meteoroids that could be traced back to their “parent” object.

But recent observations do not match this description. First, most of the asteroids passing close to the Sun seem to be disproportionately made of brighter materials than those further away. In analyzing 100,000 images of 9,000 NEOs acquired over eight years by the Catalina Sky Survey in Arizona, Mikael Granvik of the University of Helsinki and his team revealed a huge difference in the predicted number of asteroids and those they observed. Additionally, astronomers have long noted that many streams of meteors passing by Earth did not seem to have parent asteroids or comets.

How to resolve this contradiction? Perhaps the darker NEOs do not plummet into the Sun, but rather break apart long before an actual collision.

“We now understand that darker asteroids are more easily destroyed and hence the asteroids that are still around are brighter,” says Granvik. “Also the asteroids are destroyed completely, with the remaining fragments probably no larger than a few tens of centimeters according to other very recently published studies, so the lack of parent bodies for meteor streams is perfectly understandable.”

The question of course then becomes, what is causing the destruction of the darker asteroids? Granvik has ruled out the Sun’s tidal forces and direct sublimation of silicates, but is now considering a scenario in which other materials that sublimate at lower temperatures might create pressure that causes the asteroid to explode. The asteroids might self-destruct from the inside!

Want to learn more about asteroids, comets, and the hard-hitting stories of our cosmic origins? Be sure to check out our newest planetarium show Incoming! opening March 11. –Elise Ricard

Discoveries on the Edge of the Solar System

There’s been a lot of excitement lately regarding the supposed presence of another major planet beyond Neptune. While no one has directly observed “Planet Nine” just yet, astronomers Mike Brown and Konstantin Batygin make a solid case for its being out there, citing what they calculate to be its gravitational effect on other small bodies in the Kuiper Belt. As Elise Ricard wrote here in January, Brown says that if and when it is discovered, it’ll be a true ninth planet whose status will be more indisputable than Pluto’s was.

In the meantime, a team of French astronomers, led by Alice Fienga, has used precision positional data from NASA’s Cassini spacecraft, currently orbiting Saturn, to infer that Planet Nine may have affected other solar system objects, including that giant ringed planet. Their research methodology is similar to the study of irregularities in the motion of Uranus (by another French astronomer) that led to the eventual discovery of Neptune in 1846. Similarly, Fienga’s team has deduced where a massive body constrained to the orbit determined by Brown and Batygin would have to be to cause the anomalies seen in Saturn’s motion. In doing so, they have narrowed the search area where “Planet Nine” might be found.

There are likely still many massive objects out there, as indicated by another recent discovery made in May 2015. A sizeable object, designated KH162, resides in the Kuiper Belt beyond Neptune, where most dwarf planets (including Pluto) and short-period comets are found. Circling the Sun once in nearly 500 years, it’s far too small to account for Planet Nine’s gravitational effects, but if its composition is anything like the other icy objects in the outer Solar System, measurements of its brightness suggest a diameter in the range of 310–620 miles (500–1,000 kilometers). This is comparable to that of two of the largest asteroids, Ceres and Vesta, which are both substantial enough to have been called “planets” (if only temporarily) when they were first discovered.

Astronomers believe that the early Solar System was much more crowded with such objects, which were subsequently ejected by gravitational interactions with the giant planets Jupiter, Saturn, Uranus, and Neptune, which themselves may have migrated out from closer orbits around the Sun. This “violent rearrangement of the planets” is illustrated in Incoming!, the new show at Morrison Planetarium, which opens on March 11.

Discoveries of new objects such as KH162 or Planet Nine and comparisons of the structure of our own solar system with those being detected around other stars help astronomers better understand the processes that built the Solar System we’re familiar with today, and yet are truly only beginning to explore. –Bing Quock

Origin of a Fast Radio Burst

Fast Radio Bursts (FRBs) are bursts of radio waves that last only a few milliseconds. They possibly originate in distant galaxies. However, there is no generally accepted explanation for what causes them. They’re also very difficult to detect—until this week, only 16 had been reported.

Scientists publishing in Nature this week not only reported a 17th FRB, they also determined its origin. That’s because the FRB was discovered in near real-time. “In the past FRBs have been found by sifting through data months or even years later. By that time it is too late to do follow up observations.” says Evan Keane, of the Square Kilometre Array and the author of the study. His team was on the lookout for a live FRB, and on April 18, 2015, they detected one using the Parkes radio telescope in Australia. An international alert was triggered to follow up with other observations, and within a few hours, a number of telescopes around the world were looking for the same signal.

With the additional eyes on the sky, the team was able to pinpoint the location of the signal with much greater accuracy than previously possible and detected a radio afterglow that lasted for around six days before fading away. The Subaru optical telescope in Hawaii identified the origin of the FRB in an elliptical galaxy some six billion light years away. “It’s the first time we’ve been able to identify the host galaxy of an FRB,” says Keane. The optical observation also gave the researchers the redshift measurement (the speed at which the galaxy is moving away from us due to the expansion of the Universe), which yielded the first distance estimate for an FRB.

The team was also able to measure the dispersion, or the differential delay in the radio signal caused by how much material it has passed through. “Until now, the dispersion measure is all we had. By also having a distance we can now measure how dense the material is between the point of origin and Earth, and compare that with the current model of the distribution of matter in the Universe,” explains Simon Johnston, co-author of the study. “Essentially this lets us weigh the Universe, or at least the normal matter it contains.”

In our best current model, the Universe is believed to be consist of about 70% dark energy, 25% dark matter, and 5% ordinary matter (the matter that makes everything we see). However, through observations of stars, galaxies, and hydrogen (the most abundant element in the Universe), astronomers have only been able to account for about half of the ordinary matter, the rest could not be seen directly and so has been referred to as “missing.”

“The good news is our observations and the model match, we have found the missing matter,” explains Keane. “It's the first time a fast radio burst has been used to conduct a cosmological measurement.”

“This shows the potential for FRBs as new tools for cosmology,” concludes Michael Kramer who also worked on the calculation to weigh the missing matter. “Just think what we can do when we have discovered hundreds of these.” –Molly Michelson