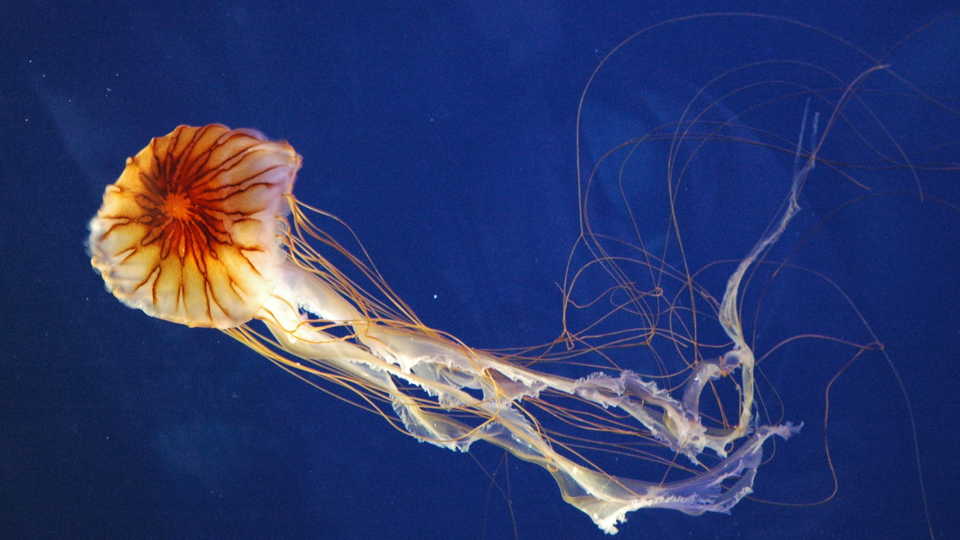 Even Michael Phelps can’t compete against lamprey eels and jellyfish. These animals, with millions of years of evolution behind them, are the most efficient swimmers on the planet. Want to know their secret, Mr. Phelps? Suction! At least according to a scientific paper published this week in Nature Communications.

“The body undulations of the normal lampreys set them apart as much better swimmers than you and me,” says Stanford’s John Dabiri, a co-author on the new study. “Human swimmers generate high pressure instead of suction. That’s good enough to get you across the pool, but requires much more energy than the suction action of lampreys and jellyfish.”

About three years ago, Dabiri began to suspect that scientists fundamentally misunderstood the underwater propulsion of animals like these. “Interactions between solid objects are usually straightforward, like two billiard balls bouncing off each other, and therefore you can calculate the forces without much difficulty,” he says. “But in a fluid every molecule is like a billiard ball and they are practically innumerable. There isn't a simple way to calculate all those interactions.”

So he and his colleagues set up a clever experiment. In a large tank of water, they floated millions of tiny hollow glass beads that served as proxies for water molecules. The team positioned two lasers opposite each other on the thin sides of the rectangle, with a high-speed digital camera set alongside each laser.

As small jellyfish and lampreys swam through the tank, their motions perturbed the glass beads, whose positions were tracked by the lasers and recorded by the digital cameras in fractions of a second. The experiment then became an exercise in computation.

Time and flow could be precisely measured for the beads, at each moment. Making thousands upon thousands of calculations, the team used these two precise variables to solve for the third, elusive variable of pressure. They fed these results into a computer that transformed the mountain of data into a visual representation of the pressure forces at play.

From the resulting image, it became clear that the low-pressure pockets (created on the inside edge of each undulating animal movement) dominated the propulsive force, by pulling water toward the animal to move it forward.

In other words, as a lamprey slithers along, it creates a pocket of low-pressure water inside each bend of its body. As the water ahead of the lamprey races into this low-pressure bend, the flow of that water pulls the lamprey forward. For jellyfish, the propulsion is similar. As the jelly’s umbrella-shaped plume collapses, water ahead of the animal is pulled aft, propelling the jellyfish forward.

“It confounds all our assumptions,” Dabiri says. “But our experiments show that jellyfish and lampreys actually suck water toward themselves to move forward instead of pushing against the water behind them, as had been previously supposed.”

The team suggests that this efficient swimming technique—suction—could be used to help design future underwater vehicles. So it might not be of much use to Michael Phelps, but us other humans can benefit!