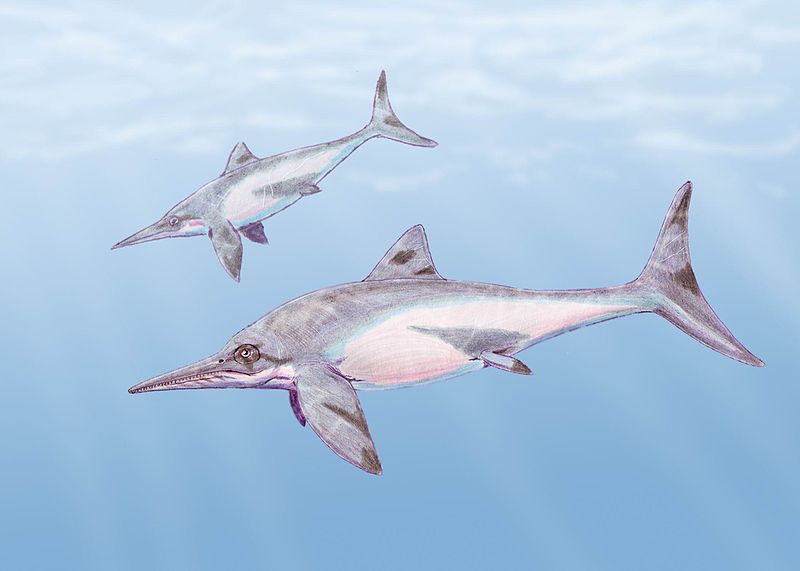 Some of the giant reptiles that ruled the ocean food chain during the time of the dinosaurs may have been able to control their own body temperatures, a new study suggests in the June 11th issue of the journal Science. These reptiles probably had high metabolic rates, which helped them dive deep and swim fast over large distances to catch their prey.

Three large, extinct swimming reptiles, the ichthyosaurs, plesiosaurs and mosasaurs, were the top ocean predators during the Mesozoic era, about 251 to 65 million years ago.

Most reptiles today are cold-blooded, meaning their body temperature is determined by how warm or cold their surroundings are. But, some of the modern ocean's top predators, tuna and swordfish, are “homeothermic” (aka warm-blooded), or able to keep their body temperatures at a constant temperature despite changing environmental conditions.

This tooth oxygen is a clue to an animal's body temperature, because it reflects the composition of oxygen in the blood.

The researchers knew that the fish whose teeth they were studying were cold-blooded. So, when they found reptile teeth with different oxygen signatures, it probably meant that those reptiles had warmer body temperatures than the fish did.

The results suggested that ichthyosaurs and plesiosaurs, which chased their prey, probably controlled their own temperatures. The data for mesosaurs, which are thought to have hunted by ambush, were less clear, but it's possible that these reptiles could control their body temperature to some degree.

In the Nature blog The Great Beyond, Robert Eagle, PhD, of the California Institute of Technology, challenges the methods used in the study:

Isotope ratios in teeth are dependent not only on body temperature, but on the levels of the oxygen isotopes in the animals' bloodstreams when their teeth were growing—something that might vary among species due to dietary and physiological differences. In a study published last month in the Proceedings of the National Academy of Sciences (see our previous article on this study), Eagle and colleagues presented an alternative analysis, based on a combination of oxygen and carbon isotopes, which they believe to be less affected by factors other than temperature. "It would be interesting to see if we get the same answer," he says.

Stay tuned to find out…