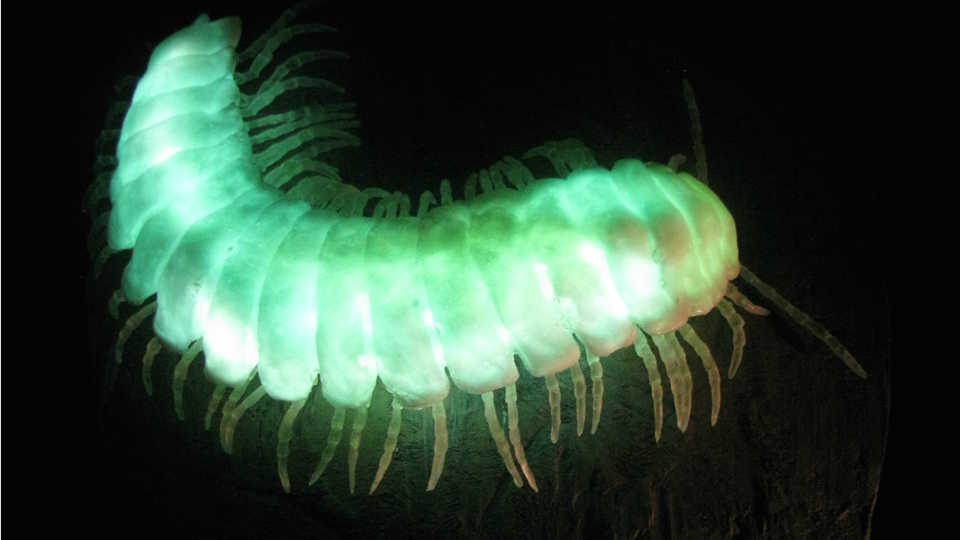 In nature these visible warning signals are called aposematism. Some creatures have evolved bright colors letting predators know they are toxic (such as butterflies, frogs, and nudibranchs), others, such as our millipedes, bioluminesce. Like the variety of colors in the natural world, there are also gradations of glow between species. It was this gradation in the California glowing millipedes that caught the eye of researchers Paul Marek and Wendy Moore.

The gradation could be a key to the evolution of bioluminescence in this genus of millipedes. As the scientists note in their recent study, published in the Proceedings of the National Academy of Sciences, Charles Darwin thought this could be true. In On the Origin of Species, he wrote: “Let us look to the great principle of gradation, and see whether Nature does not reveal to us her method of work.” So the scientists went to work, looking in the millipedes genes, to understand the origins and differences among the species and their brightness.

The team focused on millipedes in the genus of Motyxia, plus a rediscovered millipede called Xystocheir bistipita, all of which are found in the mountains of the coastal and Sierra Nevada ranges in California. The rediscovered millipede was originally collected in 1967, and was not known to glow until Marek found it again during fieldwork in the foothills of San Luis Obispo in 2013.

In addition, the team found that “the faint bioluminescence of the low-lying millipedes represented an older trait and the brighter luminescence of their mountain cousins represented a newer trait,” Marek explains. And that finding led to perhaps the most surprising discovery: the millipedes’ bioluminescence didn’t originally evolve to protect them from predators. According to the study, it “may have initially evolved to cope with metabolic stress triggered by a hot, dry environment and was repurposed as a warning signal by species colonizing high-elevation habitats with greater predation risk.”

Next month a new exhibit, Color of Life, opens at the Academy about how organisms in the natural world use color to communicate through tools like bioluminescence. Learn more here.