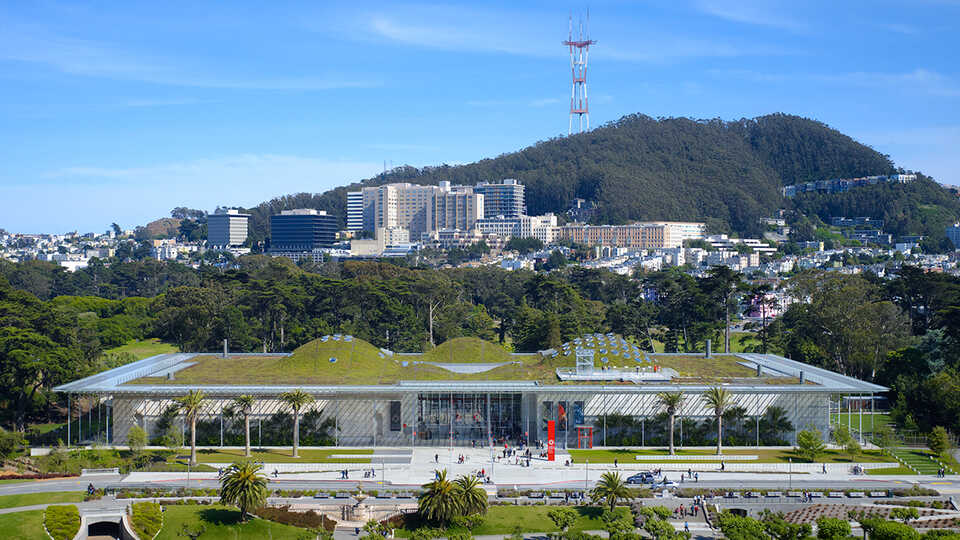 “The Academy is already one of the greenest buildings in the world, and all of our electricity is generated through renewable sources,” says Foley. “But even with this impressive start, we will work to reduce our remaining emissions from other sources, especially from natural gas consumption and related travel, and offset any remaining emissions.”

A leader in science and sustainability, the Academy was the first major museum to announce plans to divest from fossil fuels. In April of this year, as part of the Academy’s commitment to scientific integrity and the planet’s shared environmental future, the museum partnered with the March for Science to bring attention to these issues at national events in both San Francisco and Washington, D.C.

As the first museum to earn a Double LEED Platinum rating, the Academy’s cutting-edge sustainable design by renowned architect Renzo Piano has made the institution a model in green building since its reopening in 2008. As the only museum in the world to house an aquarium, planetarium, natural history museum, and four-story rainforest all under one living roof, Academy exhibits engage over 1.5 million visitors each year with the wonders of the natural world and the sustainability of our planet’s most precious ecosystems. Beyond the museum’s walls, Academy scientists are working to address the most pressing environmental issues of our time through global expeditions, world-leading scientific research, and innovative public engagement programs.

“American leadership on climate change can be found everywhere, just not in Washington, D.C.,” says Foley. “It can be seen, alive and well, in our cities and towns, counties and states, tech centers and big businesses, farms and ranches, universities and museums, places of worship, and in countless homes across the nation. While 21st century climate leadership may be on hiatus in Washington, D.C., right now, I believe that American climate leadership has never been stronger.”