Narrated by Frances McDormand, the Academy’s latest original planetarium show takes audiences on a journey through the vast networks of life on Earth 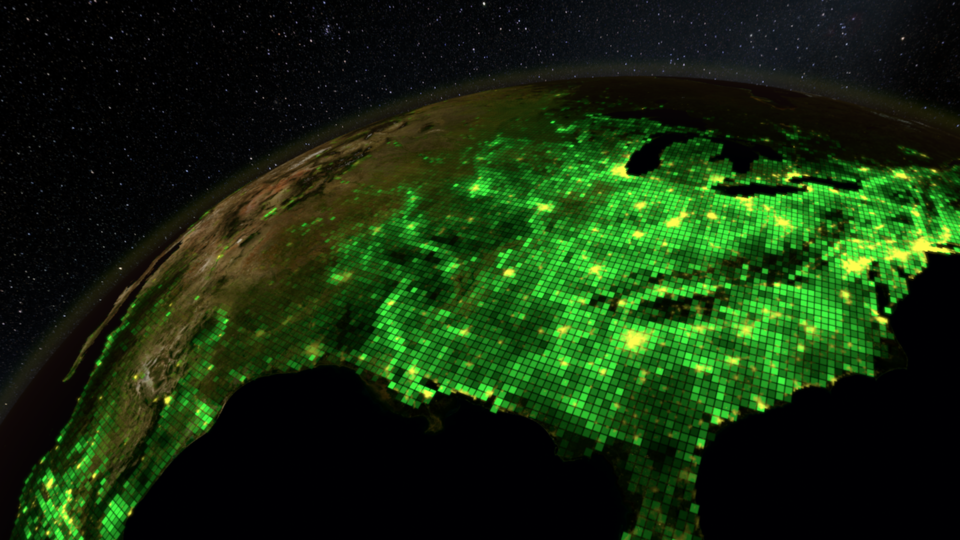 SAN FRANCISCO (December 15, 2014) – In the California Academy of Sciences’ latest original planetarium show, Habitat Earth, viewers will discover what it means to live in today’s connected world, where biological networks intersect with our own increasingly complex environment. Through stunning visualizations, audiences will dive beneath the ocean’s surface to witness the dynamic ecological relationships within kelp forests, burrow beneath the forest floor to see how some of Earth’s tallest trees depend on tiny fungi to survive, and journey to new heights to witness the intricate intersection between human and ecological networks—all from within the world’s largest all digital planetarium dome.

“In Habitat Earth, we’re advancing the boundaries of traditional planetarium content—which typically focuses on astronomy and space—by using digital technology to tell Earth-focused stories,” says Ryan Wyatt, Director of Morrison Planetarium and Science Visualization at the Academy. “Through the use of advanced digital techniques and real-time scientific data, we hope visitors will leave the dome with a better understanding of how the networks of life are connected—and perhaps most importantly, an appreciation for the habitats in which we live.”

The show’s immersive scenes may remind visitors of an IMAX film, but the rich and sweeping visuals are much more than pretty pictures—they are visualizations of many different types of scientific data, the result of thousands of hours’ worth of work. Working closely with Academy scientists and partners, the Academy’s in-house Visualization Studio studied scientific specimens from the museum’s collection, including sea otter skulls, bird skins, and kelp, to bring the characteristics and actions of these important species to life in the show.

The show opens on an aerial view of the bustling Port of Oakland, where powerful cranes lift and load shipping containers that carry fuel, food, and commodities across the globe, connecting human systems from coast to coast and picking up hitchhiking organisms—such as crabs, clams, and jellyfish—along the way. Just beyond this human-constructed transportation hub, Middle Harbor Shoreline Park—a restored wetland on the site of a former naval supply depot—comes into view. Avocets and black-neck stilts congregate in shallow waters, probing for invertebrate meals beneath the surface. Swooping through the scene, a Forster’s Tern plunges beak-first to pluck a herring from the water. These seemingly simple interactions represent a small piece of the complex circle of consumption that sustains life on Earth—a web of connections that carries on against a backdrop of human activity.

Plunging beneath the tide, viewers then travel through the emerald green waters of Point Lobos near Carmel Bay, where kelp forests sway as marine life swims through upward-reaching fronds. On underwater rocks, spiny purple sea urchins cling tight, moving ever-so-slowly as they feed on kelp blades, only to become food for a feisty sea otter—a keystone predator that helps to prevent an overabundance of sea urchins from detaching the kelp from the sea floor and creating an urchin barren. Through this window into a richly biodiverse marine ecosystem, viewers will see how tiny organisms and marine mammals support each other in a web of life. These feeding relationships extend from the smallest microbes to the largest animals, forming a diverse food web that links thousands of species and provides essential energy with every meal.

Viewers are then taken to the lush understory of a Douglas fir forest, where immersive visualizations traverse a vast fungal network, illustrating how subterranean fungi connect forest environments. The Academy’s Visualization Studio created this stunning scene by engineering a flexible mount fitted with six GoPro cameras to capture real-world footage, stitching the images together to produce a seamless fulldome experience. The resulting imagery, wedded with computer graphics, exposes the complex root systems that absorb water from beneath the forest floor, fueling the growth of trees year after year, century after century.

“In order to truly understand the networks of life that connect us, we must pay attention to the seemingly invisible microscopic communities that power these networks,” says Dr. Shannon Bennett, the Academy’s Associate Curator of Microbiology, who was one of several scientific advisors on the show. “From miniscule viruses and bacteria to massive whales and ever-expanding human populations, every piece is essential to the web of life.”

During every show at Morrison Planetarium, a presenter will deliver a live update, engaging viewers in the ways that humans fit into this evolving story of a connected world. Along the way, audiences will learn about what we can do to ensure our cohabitation with the natural world leaves a healthy, sustainable planet for generations to come.

The show concludes with a long-distance view of planet Earth from space, where data-rich visualizations trace the impact of human development on our planet from 10,000 years ago to today. By highlighting how the growth of agriculture has promoted the vast development of cities and industries around the world, the show depicts the ways in which our human fingerprint has grown.

Habitat Earth will play several times daily in Morrison Planetarium starting Friday, January 16, 2015. Adults 21+ will have the chance to preview the show during a special Habitat Earth NightLife event on Thursday, January 15 from 6-10 pm. In addition, the Academy will host a special one-day festival on Saturday, January 17 highlighting the people and technology behind the show’s cutting-edge science visualization. Academy visitors can also enjoy a daily suite of interactive, ecology-themed programs within the Academy’s walls and beyond, including a presenter-led show in Hohfeld Hall titled Extreme Life, walking tours that explore the ecological corridors around the museum, citizen science bioblitzes, and more.

The California Academy of Sciences is home to an aquarium, planetarium, natural history museum, and research and education programs, which engage people of all ages and backgrounds on two of the most important topics of our time: life and its sustainability. Admission to the Academy is: $34.95 for adults; $29.95 for youth ages 12 to 17, Seniors ages 65+, and students with valid ID; $24.95 for children ages 4 to 11; and free for children ages 3 and younger. Admission fees include all exhibits and shows. Hours are 9:30 am - 5:00 pm Monday - Saturday, and 11:00 am - 5:00 pm on Sunday. During peak periods, including some holiday weekends, extended hours may apply. Visit www.calacademy.org or call (415) 379-8000 for more.