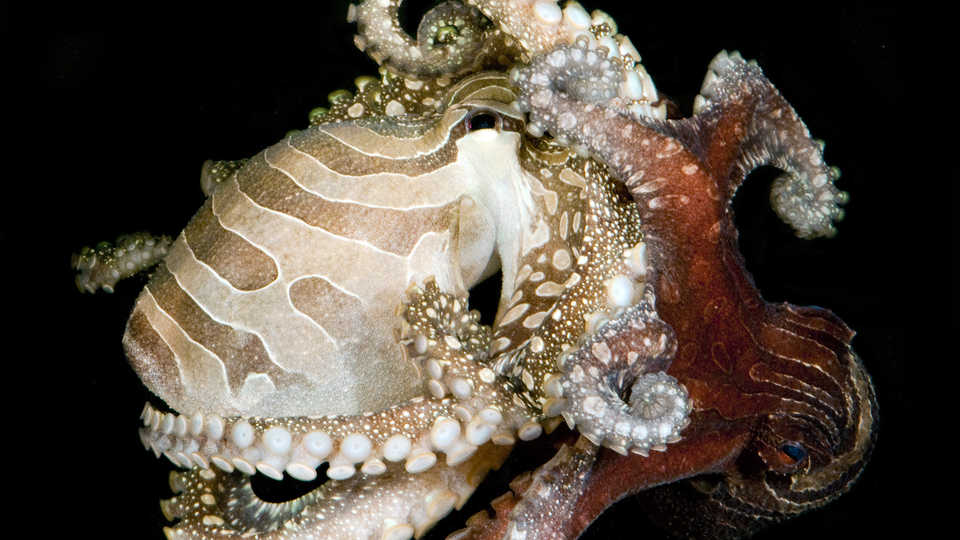 SAN FRANCISCO (August 12, 2015) – A remarkable yet little-known species of octopus is once again exciting the cephalopod community with its surprisingly social behavior, unconventional mating and reproductive habits, unusual predatory behavior, and unique body patterns, most of which have never before been observed among octopuses. A team of scientists—including Richard Ross, senior aquarium biologist and cephalopod expert from the California Academy of Sciences—published the results of their multi-year behavioral study this week in the journal PLOS ONE.

The history of the elusive larger Pacific striped octopus is as colorful as the eight-armed creature itself. Though this species was first observed over four decades ago, it still remains without a formal scientific description. Dr. Arcadio Rodaniche, one of the paper’s co-authors, was the first to record the species’ striking appearance and describe its uncharacteristic behaviors both in the field and in captivity during the 1970s, but his unprecedented observations were so unique that they were largely ignored at the time, leaving the octopus’s fascinating behavior unstudied for decades. But when Ross, Academy Fellow Dr. Roy Caldwell of U.C. Berkeley, and Academy Research Associate Dr. Christine Huffard of Monterey Bay Aquarium Research Institute began studying captive larger Pacific striped octopuses nearly 35 years later in 2012, they confirmed Rodaniche’s original observations, reigniting the intrigue of cephalopod biologists around the world.

“Personally observing and recording the incredibly unique cohabitation, hunting, and mating behaviors of this fascinating octopus was beyond exciting—almost like watching cryptozoology turn into real-life zoology,” says Ross. “It reminds us how much we still have to learn about the mysterious world of cephalopods.”

This species’ intimate mating strategy proved to be one of the team’s most surprising observations, challenging all that is known about conventional octopus reproduction. Because female octopuses have a reputation of eating their mates, it is believed that octopuses tend to live solitary lives—and when they do come together to mate, males typically try to stay as far away as possible from their mate’s mouth. However, Ross and Caldwell observed live specimens in aquarium settings between 2012-2014, finding that pairs of males and females successfully mated without extreme aggression or cannibalism. During mating, the male and female come together in an intimate beak-to-beak, sucker-to-sucker position, very different from mating by other octopus species in which the male transfers sperm packets to the female from a distance to protect itself from potential harm. The team also observed pairs of octopuses feeding in the unique beak-to-beak position, allowing both male and female to share a meal, and even share the same den for days at a time.

Additionally, unlike other octopus species in which females tend to die after producing a single clutch of eggs, female larger Pacific striped octopuses can lay many clutches of eggs continuously over the course of their adult lives. While in captive environments, females laid eggs for up to six months and brooded for up to eight months. Even after their eggs began hatching, females continued to feed, mate, and lay hundreds more eggs—demonstrating yet another unusual behavior that the team believes is exclusive to this species.

Over this same two-year period, Ross displayed several combinations of male and female octopuses together in a shared exhibit at the Academy’s Steinhart Aquarium to observe social interaction and group dynamics. He found that both sexes were able to peacefully cohabitate, at times sharing the same den and supporting earlier observations by Rodaniche that reported groups of up to 40 individuals living together in tropical Eastern Pacific waters. While on exhibit, several pairs mated daily and produced multiple clutches of eggs, giving the team the opportunity to observe habits of brooding females as well. These cohabitation behaviors have rarely been observed among other octopuses.

While many species of octopus are known for their showy displays of color, the larger Pacific striped octopus is particularly notable for its striking high-contrast display of colors and patterns, which can vary from a pale to dark reddish-brown hue to black with white stripes and spots with both smooth and uneven skin textures. The species can also assume a number of unique body postures that vary while in motion, while hunting, during mating, and while at rest.

“The next step to understanding the unique behaviors found in the larger Pacific striped octopus will be to observe groups in their natural habitat,” says Caldwell. “Only by observing the context in which these behaviors occur in the wild can we begin to piece together how this octopus has evolved behaviors so radically different from what occurs in most other species of octopus.”

In 2013, the Academy’s Steinhart Aquarium became the first public aquarium to display this elusive octopus and hopes to exhibit the species again in the future. With so little previously known about the larger Pacific striped octopus, the team hopes to continue studying the dietary needs of newly-hatched planktonic larvae to develop a captive breeding protocol and learn more about the animal’s full life cycle.