Researchers use scientific collections to return a subspecies of giant elephant-shrew from the Congo Basin to full species status. 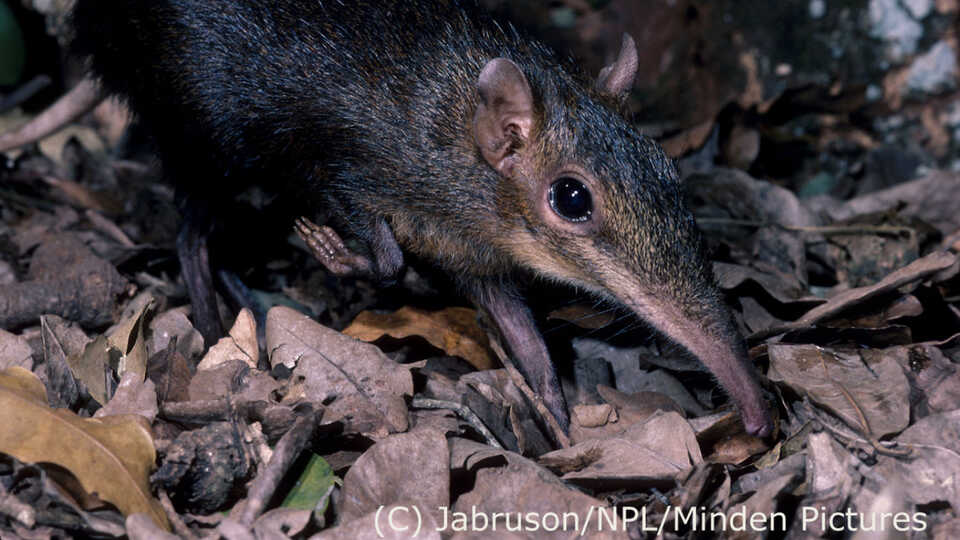 SAN FRANCISCO (August 2, 2017)—One small mammal is experiencing a triumphant return to its long-ago spot on the tree of life. Scientists have elevated a subspecies of giant sengi, or elephant-shrew, to full species status. Aided by genetic information gathered from the California Academy of Sciences’ vast mammal collection, Academy researchers collaborated with colleagues from the University of Alaska Museum (UAM), the Sokoine University of Agriculture in Tanzania, and the Field Museum of Natural History in Chicago (FMNH) to explore the evolutionary relationships among giant sengis. In the process, the team discovered that a white-tailed subspecies of giant sengi from the Congo Basin and western Uganda was genetically distinct enough to return it to full species status, as originally designated upon its discovery in the late nineteenth century. Rhynchocyon cirnei stuhlmanni (now R. stuhlmanni) follows three new sengi species discoveries from the last decade. The team’s revision of species relationships among giant sengis appears this summer in Molecular Phylogenetics and Evolution.

“Sengis are long-legged, small mammals restricted to Africa that occupy a wide range of landscapes, from coastal deserts to mountain forests,” says Dr. Jack Dumbacher, Academy Curator of Ornithology and Mammalogy and co-author of the last sengi discovery from 2014. “They are particularly fascinating to study because they’ve come to occupy unique ecological roles across diverse habitats, and have a distinct evolutionary history.”

Despite their small size, sengis are more closely related to elephants, sea cows, and aardvarks than they are to true shrews. Understanding the evolutionary relationships among sengis has proven particularly challenging. Ground-dwelling and the size of a cat, giant sengis have relatively few defining distinctive physical traits with which to set them apart from one another, other than their coloration.

When it was originally discovered in 1893, R. stuhlmanni was described as a full species, but in the late 1960s scientists re-classified it as a subspecies of the checkered sengi, R. cirnei. At the time, it was acknowledged that R. stuhlmanni’s distinct all-white tail and smaller nose bones—when compared to the features of its closest relatives—might justify a return to full species status, but the suspicion was left unresolved.

A half-century later, a collaborative scientific team embarked on a sweeping investigation of the entire giant sengi group—searching for new associations and old inaccuracies among species relationships—and they turned to the Academy’s mammal collection for invaluable genetic clues.

Lead-author Elizabeth Carlen, at the time a Master’s student at San Francisco State University and an Academy researcher, was part of a collaborative team of experts with Academy Fellow and Research Associate Dr. Galen Rathbun to extract DNA from fresh tissues and museum specimens for sequencing. The resulting genetic codes revealed the evolutionary relationships among the different forms of Rhynchocyon and called for a revision of species relationships.

“When some specimens were collected decades ago, there was no way scientists could have known we would one day be able to sequence DNA to determine how they’re all related,” says Carlen, now a PhD candidate at Fordham University, highlighting how instrumental museum collections are for providing valuable genetic information. “We can now go back into these libraries of life and apply modern analyses to ancient, untapped evidence.”

“Fostering this type of collaborative, genetic work is not only important for understanding the evolution of mammals, but also the different behaviors and ecology of sengi species,” adds Rathbun, who has devoted much of his career to studying sengis and mentoring up-and-coming scientists like Carlen along the way. “Sengis are so distantly related to other mammals that their presence in certain ecological communities provides unique diversity—the importance of which we’re only beginning to understand.”

“There are so many fascinating creatures on this planet, and until we understand how many sengis there are it’s difficult to know how to protect them,” says Carlen. “I’m so thankful for the work of scientists before me that have allowed us to answer important questions about how mammals evolved. Today, I collect specimens so that scientists 200 years from now can answer questions we haven’t even thought to ask.”